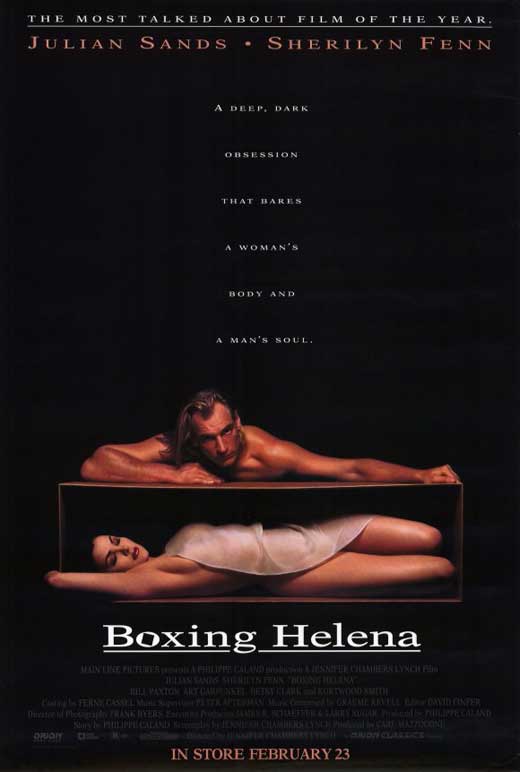 But Why Are They Boxing Helena?

In September 1993, not many people were asking this question. They were too busy calling its writer/director, Jennifer Lynch, a misogynist. The ones who bothered watching it, anyway. It was ignored by the public along with being berated by critics. The same critics who, three years earlier, applauded Pedro Almodóvar for creating a very similar film, TIE ME UP! TIE ME DOWN! Both are about a man who obsesses over a woman, to the point where he kidnaps her and forces her to love him, and succeeds. Antonio Banderas made off like a bandit. Almodóvar’s career took off, and he brought the co-star, Victoria Abril, along for the ride. Julian Sands and Sherilyn Fenn got steady work over the years, but nothing like their Spanish comrades-in-bondage did. Jennifer Lynch didn’t make another film until 2008.

Why did they start boxing Helena? When she was 19, Jennifer Lynch was approached by producer Philippe Caland with an idea: A man kidnaps a woman, hacks her limbs off, and then has sex with her. Lynch took the job, but only if she could make it far less exploitative than Caland intended. Under her pen, what started off as something that Russ Meyer and Hershell Gordon Lewis could’ve proudly teamed up to make instead turned into a strange fairy tale, about a sad man who kidnaps his obsession, cutting off her limbs until she needs him as much as he needs her. Then Madonna became interested in playing Helena… then she didn’t. She felt that she wasn’t right for the role, and returned her acting fee. Kim Basinger also was interested, until she wasn’t. She ended up filing for bankruptcy because she listened to the wrong people about ditching the role. Lynch eventually found her Helena in Sherilyn Fenn, resident of Twin Peaks.

Who was boxing Helena? That would be Nick, played by Julian Sands. A lot of credit has to go to Sands because Nick is, by no stretch of the imagination, a manly role. Bill Paxton’s also in the film, and it’s almost like he picks up the testosterone slack as the leather-wearing horndog with a gun. Sands’ Nick is a surgeon — which helps with the whole removing limbs thing — who has everything a guy could want: A nice job, a paycheck that befits a PhD, and a woman who loves him. Yet he’s willing to throw it all away for a stranger he had a one-night stand with. He and his therapist eventually get her out of his system, but a (un)lucky meeting with Helena at a bar makes Nick relapse. Hard. He invites her to a party and shamelessly fawns over her, in clear view of his girlfriend. A while later, an accident “allows” Nick to keep Helena like a pet.

Who is Helena? Sherilyn Fenn plays her as unrepentant. She’s a woman who knows what she wants and has no time for uninteresting things. What happens to her isn’t punishment, though: it’s unfortunate. And I don’t mean this negatively but, in a way, Helena and Nick are more archetypes than characters. She’s the queen to his stable boy. She even gets a throne towards the end. After the car accident occurs and he takes her legs, she still wants nothing to do with him, and has no problem with reminding him as often as she can. There’s a scene where she talks to him about when they had sex, and she calls him pathetic for crying, shaking, and not even lasting five seconds. It’s only when he takes her arms away that she starts to need him: because she has to. The reason why he removed them is because she choked him, and that reminded him of his mother.

Why not unbox Helena? The film community’s long-term reaction to BOXING HELENA and TIE ME UP! TIE ME DOWN! reminds me a lot of PEEPING TOM and PSYCHO. Michael Powell and Alfred Hitchcock made what could be considered the world’s first mainstream serial killer movies at around the same time, but Powell was berated while Hitchcock was applauded. PEEPING TOM dealt with voyeurism and sexual repression, whereas PSYCHO was a rejigged Ed Gein biopic. Powell never got to work again, unlike Hitchcock. Sound familiar?

Revisiting Jennifer Lynch’s first film, good and bad things stand out. She didn’t try to be her father, the actors and actresses gave everything they had for her, and she leaves you with a lot to think about. But the movie literally becomes Nick’s wish-fulfillment at the end, some parts are very early-90’s, and Jennifer Lynch was put into director jail because of the movie. In this age of rediscovery, give it a chance. I’ll leave the last words to Helena: