BAD LIEUTENANT: PORT OF CALL NEW ORLEANS is of course is the awkwardly-titled movie that represents the inevitably-bizarre, bizarrely-inevitable collaboration between professional eccentrics Werner Herzog and Nicolas Cage.  And underappreciated actor and professional beauty Eva Mendes – let’s, please, not forget her. This review certainly will not.

Having seen the movie, I’m not sure why it had to be connected to Abel Ferrara’s 1992 cult shocker BAD LIEUTENANT. In interviews, Herzog has indicated some discomfort with the title, and has hinted that it was named solely for commercial reasons beyond his control. (It should tell you something about the nature of Herzog’s film that its producers insisted on reaching back twenty years to a controversial but hardly lucrative independent film as a desperate stab at adding the least bit of commercial prospect.)  Herzog’s “remake” seems to play fast and loose with the original film – at best – really keeping only the concept of a corrupt cop with tremendous drug dependencies and a serious gambling problem, rampaging through his city of employ. The new BAD LIEUTENANT even improves on the original, by sparing us the sight of Nicolas Cage’s private parts, whereas the original foisted Harvey Keitel’s dangly garbage upon us.

Also it improves on the original by, you know, adding Eva Mendes. This would improve just about any movie I can imagine. [Even the perfect ones: JAWS, GHOSTBUSTERS, THE GODFATHER, CITIZEN KANE, THE SEARCHERS, VERTIGO, GOODFELLAS, THE GOOD THE BAD & THE UGLY… Drop Eva Mendes in any one of those flicks and they’d go from 100% to 120%, just on a visual basis alone.] 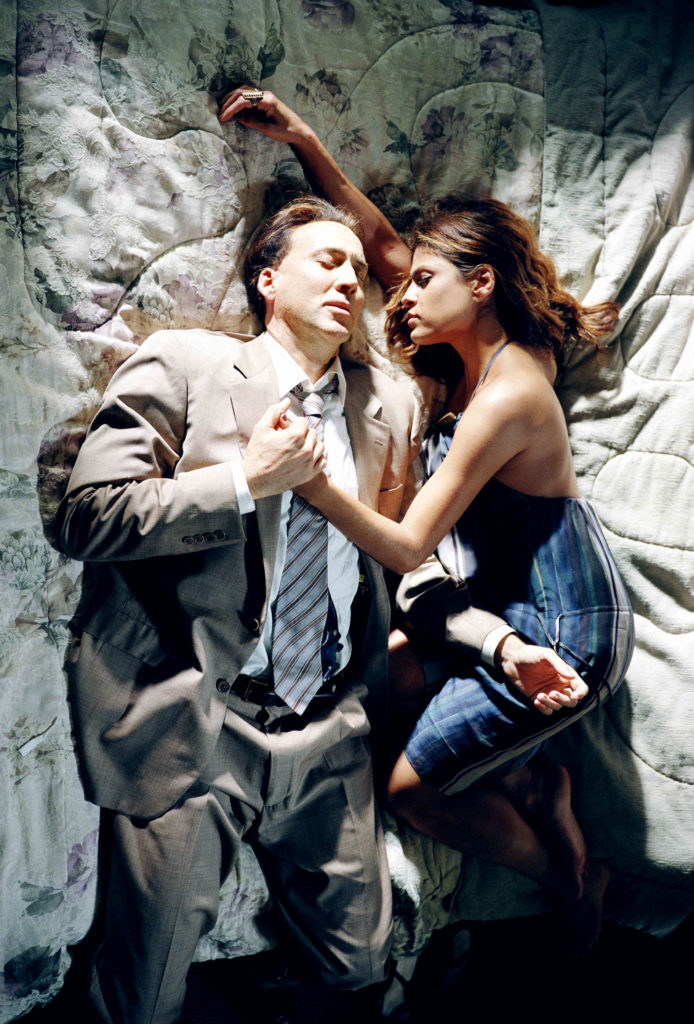 Anyway in PORT OF CALL NEW ORLEANS, Cage plays Terence McDonagh, who despite the similarity in surname bears no discernible relation to his much more lovable character in RAISING ARIZONA.  Cage is a total freak in this movie – a SUPER-freak, actually – and fans of the actor in manic, cartoonish, expressionistic, histrionic mode will find plenty to enjoy here. Admittedly, it’s not a sight that is for everybody, in the same way that some people complain about the late-period Al Pacino performances which find Big Al bellowing and growling like an overstuffed and leaky furnace.  I understand the complaints, but I don’t agree with those people. I love Yelling Pacino as much as the earlier version, and at least with him, there’s usually a reason for the histrionics. With Cage, sometimes it works for me and sometimes it doesn’t. In KICK-ASS, I felt like his performance was inconsistent and improperly policed, and his multiple modulations often didn’t fit the story. Here, it’s not that way. It isn’t exactly as if there’s a method to the madness, but at least the madness fits the role. 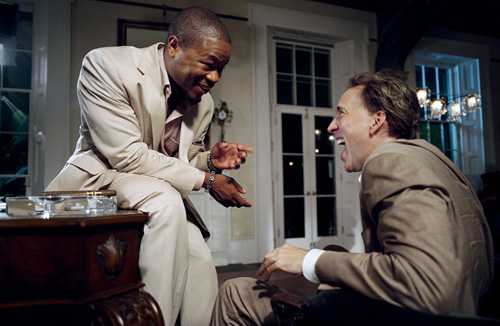 Terence McDonagh is an addict in the throes of addiction. He’s a fiend for pills and a degenerate gambler, and between these two activities he has plenty of time to sample just about every illicit substance that he comes across. He’s come into this condition due to crippling pain from a back injury he sustained by rescuing a prisoner from a rapidly flooding jail during Hurricane Katrina. His partner had suggested that they let the creep drown like a trapped rat, but McDonagh did the right thing and went in after the guy. It’s the last right thing that McDonagh does in the movie, and that’s in the opening three minutes. The rest of the movie is relatively generic in the way of plot – McDonagh has to track the killers of an immigrant family while contending with his bookie and the much more dangerous adversaries who really run things – but it’s a hysterical and haphazard gauntlet of strange characters and random detours, all of which add up to make the trip worth taking. It’s pretty damn bizarre but at least it’s not average.

Val Kilmer plays the voice of reason in this movie. That’s all I’m saying. 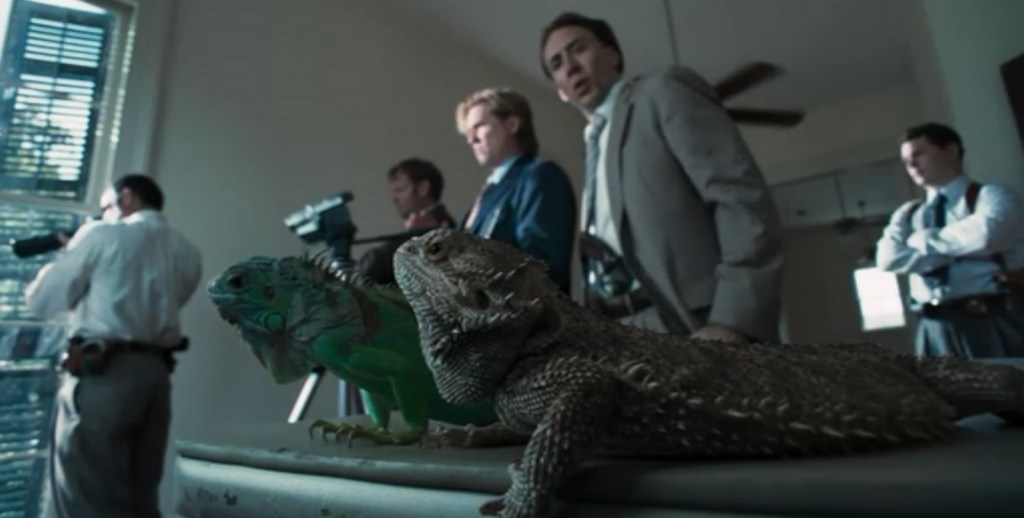 The whole cast is weird and watchable. Nicolas Cage stomps through the movie with shoulders hunched like Frankenstein’s monster, his eyes sunken in to his skull as far as they can go, his hair looking like it’s slowly slipping off the back of his head. He’s like a zombie hooked up to a semi-regular IV conduit to a reservoir of Jolt Cola. His mannerisms are so far over the top they’re like a 3-D effect – my favorite tics were the way he kept giggling at a drug dealer’s street name (“G! HEHEHEE!”) and the way he switched mid-sentence from interrogating a woman at her doorstep to cooing over the baby in her arms (“AAAW!”). Of course there are the moments where he hallucinates a roomful of iguana during a stakeout or where he pulls a gun on an elderly woman and then cuts off her oxygen supply just to get information on a suspect, or when he instructs some of his criminal cohorts to keep shooting an already-dead body just to “watch his soul dance” – but you might have already heard of these moments. They’re the highlight reel of an Oscar montage in an alternate universe where this Bizarro Cage gets the laudatory recognition that is normally bestowed on the likes of Meryl Streep. 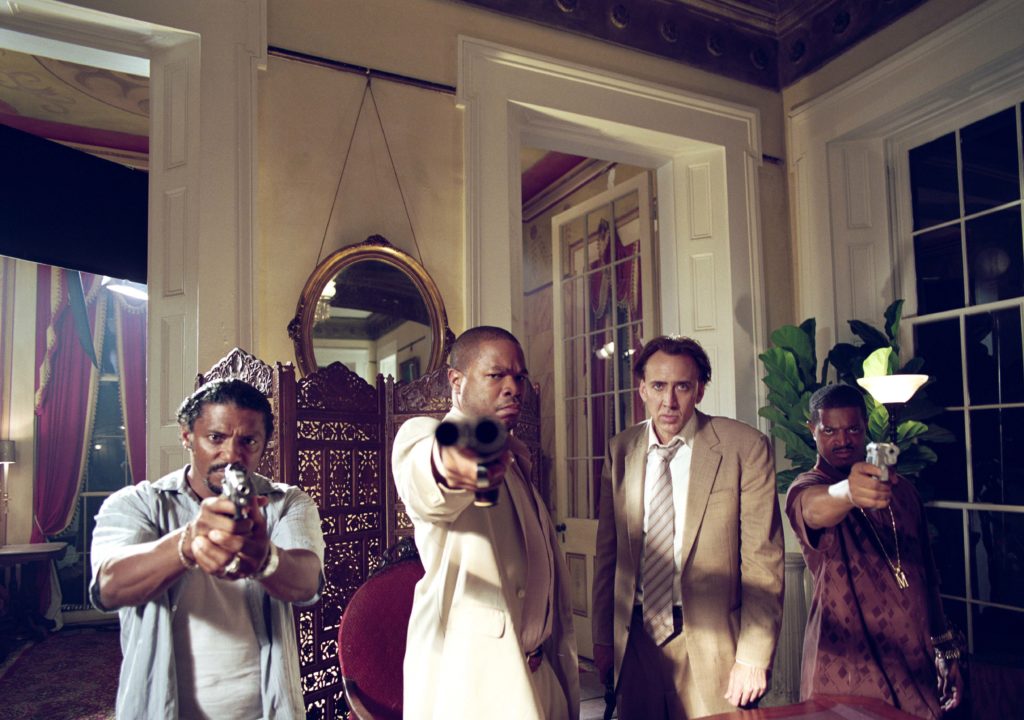 Val Kilmer, that notorious onscreen nutjob, is, as I mentioned, in the movie mostly to serve as a barometer to show how far gone Cage’s character is. (“There ain’t no iguana.”) When Val Kilmer is your straight man, things have gone wackadoo. Meanwhile, Christopher Guest regular Jennifer Coolidge shows up in a rare dramatic role as McDonagh’s step-mom, who has cut back to beer in an effort to support her husband’s attempt at recovery. (McDonagh still needs to drive his dad to AA though. Remember, this is in the middle of a criminal investigation and a ticking-clock situation with criminals to whom he owes huge amounts of money.)

Eva Mendes appears regularly to walk around and say words, which would be enough for me but in my biased opinion she also happens to be terrific in the movie. (And is actually a generally underrated actress still deserving of a chance to fully cut loose.) Here she plays McDonagh’s improbably-gorgeous junkie-whore girlfriend, named Frankie, and somehow manages to make mutual self-destruction seem romantic and just short of appealing. Seriously-underrated character actor Shea Whigham pops up in a couple of scenes as one of Frankie’s customers, and he somehow manages to be as hilariously entitled as any Will Ferrell character, considering that he’s playing an abusive sociopath. There are a few more surprise appearances along the way that I won’t spoil, and the wildlife – including a still-twitching alligator roadkill – deserves a mention alongside the two-legged cast. 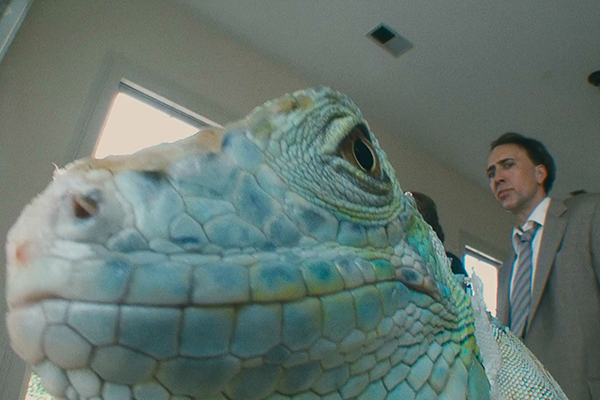 That’s the thing about this movie – it’s interesting for the likably grotesque characters and the eccentric details, while it’s sure to disappoint anyone looking for a straight procedural. I strongly suspect that Werner Herzog only took on this movie for the chance to run rampant through post-Katrina New Orleans with Nicolas Cage and a movie camera. The plot only exists as a framework upon which to hang the parts that Herzog is really interested in. The best parts of PORT OF CALL NEW ORLEANS are the weird digressions and strange bits of business on the side – the interstitial images and establishing wide shots, the strange setpieces such as the traffic incident caused by the aforementioned alligator collision, and so on. Herzog is really a documentarian at heart, which is my assumption corroborated by the merits of this movie, and he brings a documentarian’s eye and also a love of extreme human behavior to an otherwise standard crime story. 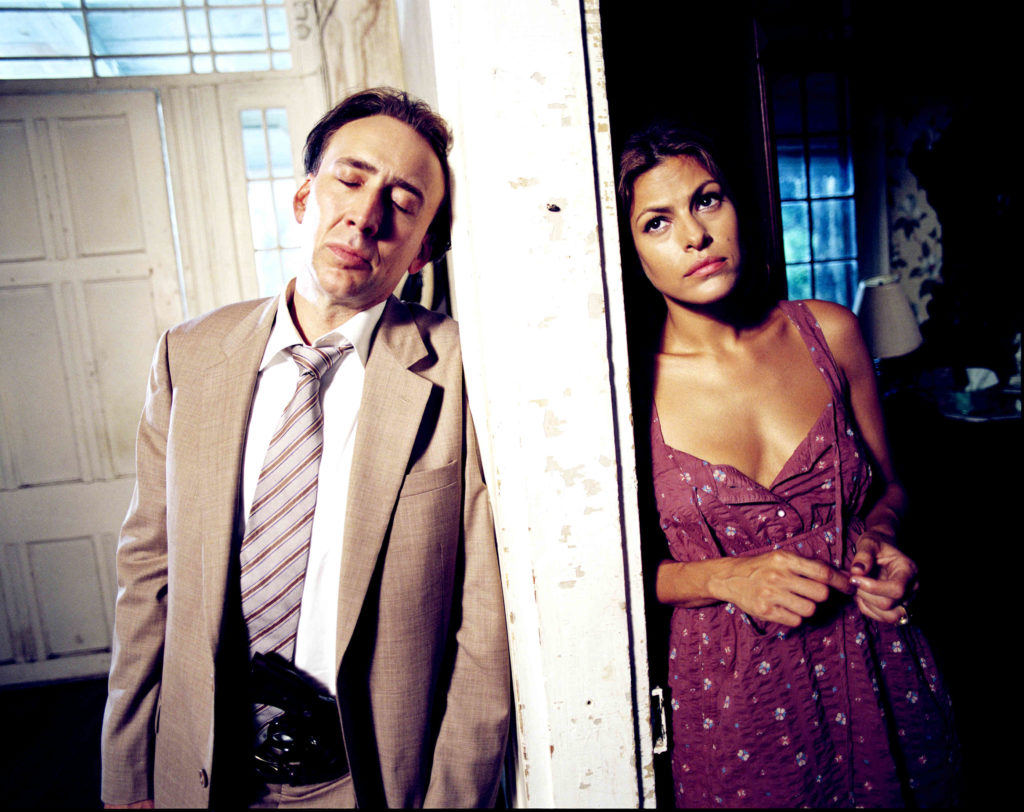 It’s an oddity on the filmography of just about everyone else involved (oddities are kind of par for the course for both Herzog and Cage), but in my opinion BAD LIEUTENANT: PORT OF CALL NEW ORLEANS is well worth looking at. Also, as I may have mentioned, it has Eva Mendes walking around saying words. If you’re a real red-blooded American male, that’s a no-brainer.  Even if you’re a gay guy, a lady, a monk, anything else alive, or even undead, it’s still quite the spectacle. 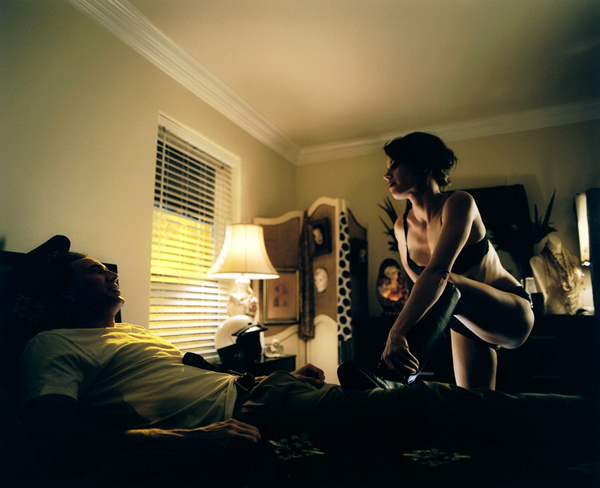 This review originally surfaced sometime back in 2009, when I was still writing this way.