I’m gonna be honest, folks, this has been a pretty busy week for me, professionally, and for a minute there I actually didn’t think I’d get this column in. So if you’ll excuse the usual preamble, we’ll jump right into it with this week’s ten Blu-Ray picks for your hi-def viewing pleasure. This week was pretty light on new releases, but it comes with enough variety to keep things interesting — with a week packed with sex comedies, grimy exploitation gems, a goat, and more noir than you can take down with a tommy-gun, how could it not be? 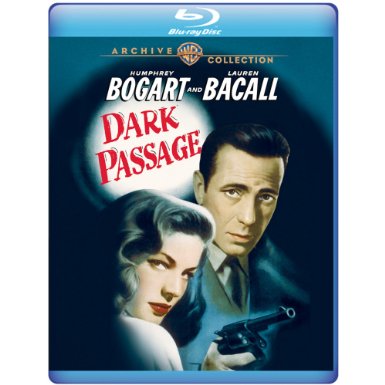 Gun to my head, I would probably admit that DARK PASSAGE is my favorite Bogart & Bacall film. Taking into account TO HAVE AND HAVE NOT and THE BIG SLEEP, I’m usually told that’s a hell of a statement. I stand by it, though, although those other two are stone-cold masterpieces. There’s a intimacy to the real darkness swirling around at the heart of this film. Which makes sense, given that it’s based on a novel by Philadelphia’s crown prince of the doomed, David Goodis. Few films are this good at making you feel like a vice is closing in on you, just as much as its characters do. Both Bogart and Bacall were at the top of their games (and fully immersed in their real-life romance) at the time, so that any scene they share at this point puts the film negative in danger of lighting on fire. Immersed in atmosphere and imagery — Bogart’s bandaged face became a definitive image for the genre — this flick is necessary viewing. 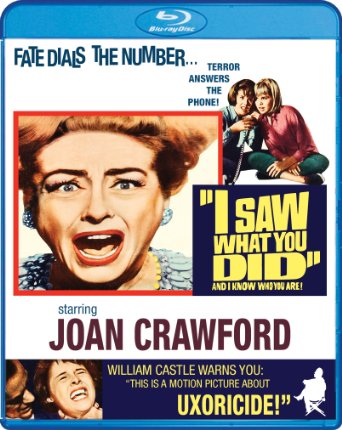 One of my favorite movies of all time is MATINEE, which by osmosis gave me a real appreciation for the work of William Castle. In the grand scheme of film history, Castle is just as important to the horror genre as the atmospheric Universal Monster movies or the technical precision of Hitchcock. Castle created a filmography that just goes for it, gimmicky and a schlocky sure, but what’s wrong with that, as long as you’re having fun? I’ve never seen I SAW WHAT YOU DID, but it should be an interesting watch, as it’s part of the tail end of Castle’s career, where, from what I’ve read, Castle was actively pursuing cinematic legitimacy. Working with Joan Crawford is definitely a coup, although you can bet she thought she was slumming at the time, but Castle was always his own worst enemy when it came to this kind of thing, because a showman trying to be an artist is still a showman, and that’s generally what comes through.  If nothing else, it should still be a hell of a show.

And hey, it made me bust out my dictionary to find out what “uxoricide” means, so that’s something. 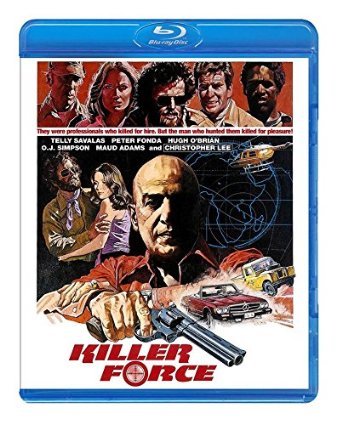 Also known as THE DIAMOND MERCENARIES, KILLER FORCE looks like its a solid piece of hard-knuckled ‘seventies sleaze. Its got a solid cast, including the always-punchable Peter Fonda, semi-professional glove-model OJ Simpson, the always welcome Christopher Lee, and Vin Diesel prototype Telly Savalas, involved in a a diamond heist, so right there that should be enough to keep even someone passing by your TV stop and look at the screen. Directed by journeyman writer/director Val Guest, who’s probably best well known for directing a few of Hammer’s Quartermass films, it looks like he managed to scrape together a flick that should appeal to a lot of our particular tastes. Doubt it’ll live up to that poster, but I’m gonna let it try. 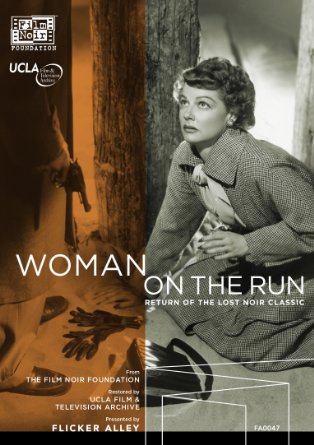 Don’t know much about this one, except that anything with the Film Noir Foundation printed on its cover is going to have my interest. With a plot involving a woman searching for her fugitive husband with a hitman close behind, and the presentation done by the good folks at Flicker Alley, I doubt this is nothing less than a gem that’ll never look better with this kind of presentation. 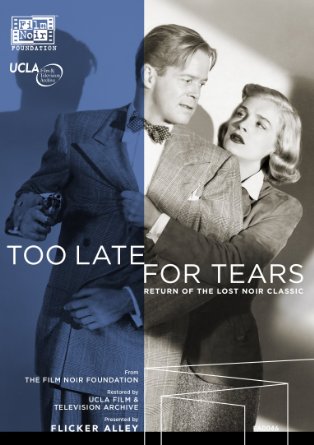 Ditto to all the above. To think we have not one but two Film Noir Foundation supervised films being released on the same day is almost too good to be true. This one focuses on a married couple who inadvertently end up with a suitcase full of cash, and although the husband is eager to involve the police, his wife convinces him they should hang on to it. I’m gonna guess that doesn’t work out for them. 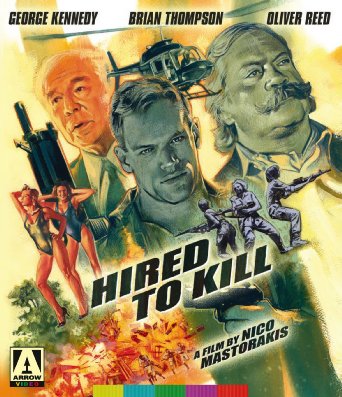 So from the looks of things, Nico Mastorakis is having a bit of a rediscovery period, thanks to the folks at Arrow Video. First it was ISLAND OF DEATH last year, and then THE ZERO BOYS last month. Now we’ve got HIRED TO KILL on deck, ready to blow us all away. I’m only really aware of star Brian Thompson because I’ve watched him get obliterated in THE TERMINATOR three dozen times over the years, but it looks like he isn’t even the guy to bring the hurt. Instead, this flick focuses on a team of female assassins going undercover as fashion models to overthrow a dictator– OH MY GOD just let me watch this movie now! Wouldn’t be surprised if this becomes the top rediscovery of 2016. 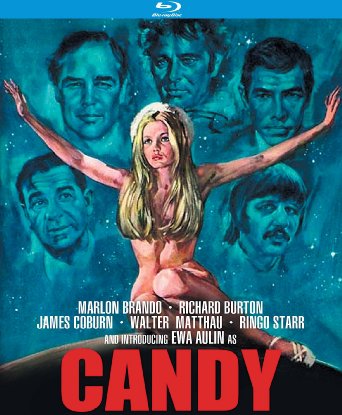 I’ll be the first to admit that the sex farces of the ‘sixties aren’t exactly my cup of tea. The ones I’ve seen have tended to bend over backwards NOT to actually show anything sexy, which gets frustrating to the point of wasting your time. Still, few of those movies have a cast as stacked (sorry) as this.  You got Walter Matthau, Richard Burton, James Coburn, and Marlon Brando all trying to get all up in Ewa Aulin, while I assume Ringo Starr sits and watches in the corner. I can’t imagine that this film won’t be a disappointment to the film I’m already imagining in my head, but compared to some other things I’ve seen in this genre, at least its giving me something I want to imagine. 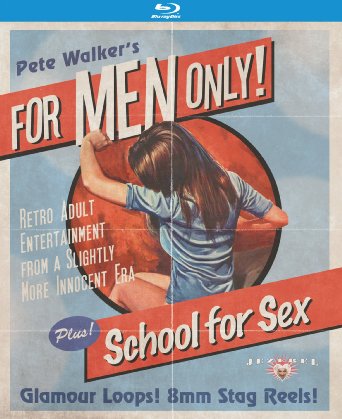 This is more a curiosity than a necessity. Director Pete Walker is a guy who I am surprised hasn’t received a real reappraisal for his work. [EDITOR’S NOTE: Little Miss Risk did her part!] Part of it might come down to the fact that Walker was working the most during a time when people like Dario Argento, Wes Craven, George Romero, and John Carpenter were tearing shit up, but films like FRIGHTMARE, SCHIZO, and THE COMEBACK have their own unique kind of odd sophistication. Which is why it might be interesting to watch FOR MEN ONLY and SCHOOL FOR SEX, because these stag films are where Walker cut his teeth, and where he started to realize where to push his boundaries. Definitely worth a look, if you’re a fan of Walker, or if you’re just a pervert. Either way, no judgement. 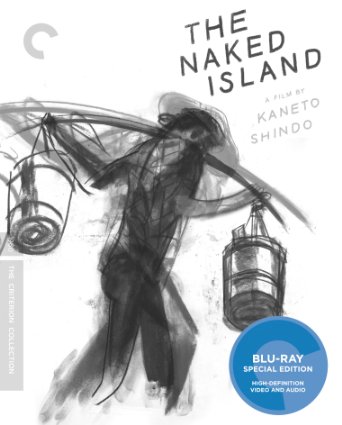 All right, time for a change of pace, and although it might not seem it, given its title, I can’t think of a movie more far removed from the sex and violence of the previous entries then this near-silent movie about a family of secluded farmers, THE NAKED ISLAND. Directed by Kaneto Shindo, a pioneer in the world of independent Japanese cinema, who worked in film up until his death at the age of 100, this is mostly notable for the fact that it has no dialogue and is shot almost like a documentary, with some truly stunning photography of Japan’s small isolated island communities. Lately I’ve been trying to watch more Japanese cinema that isn’t focused on samurai or yakuza, and from what I’ve been told, this is a watershed film for the country, and a good entry point to the rest of Shindo’s filmography. 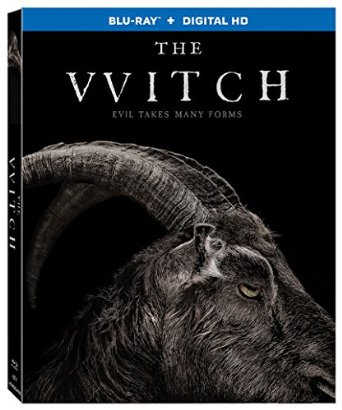 I reviewed this back when it played at TIFF, and my opinion hasn’t really changed. However, if you’ll allow me to add a little postscript, I found it really head-scratchingly annoying when the film finally hit theaters, and suddenly the conversation turned went from “damn, this is great” to “meh, its not even really a horror movie.” Its the sort of statement that makes me want to go up to someone, smack them upside the head, and yell, “This is why we can’t have nice things!”

Look, I hate the phrase “elevated genre film” as much as the next gu,y but once again, we got something cool, got hung up on redundant check-boxes, and while we were arguing, we let the arthouse dorks take it and put us down in the process. Director Robert Eggers created something really special here that deserves to be celebrated and studied, and not tossed away because it doesn’t have jump scares. If nothing else, it gives us a good alternative presidential candidate in Black Philip come November.

Tags: Blu-Rays, Bury Me In Blu-Rays