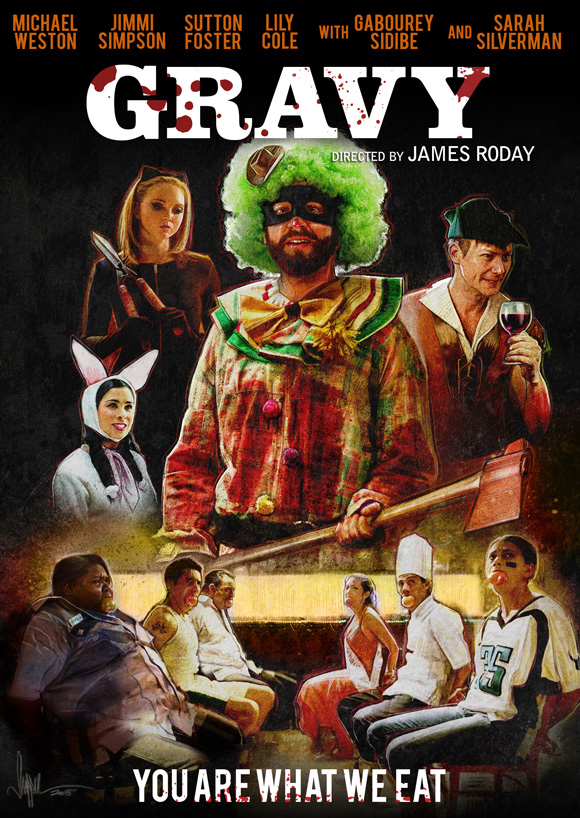 Creating a successful horror comedy is a tricky thing. It can’t be too much horror, or else you lose the the comedy audience. On the other hand, it can’t be too comedic, or else you lose the horror audience. GRAVY seems to walk that middle line almost perfectly. Sure there is some great gore and it’s about a group of cannibals, but it’s way more funny than it is remotely scary. 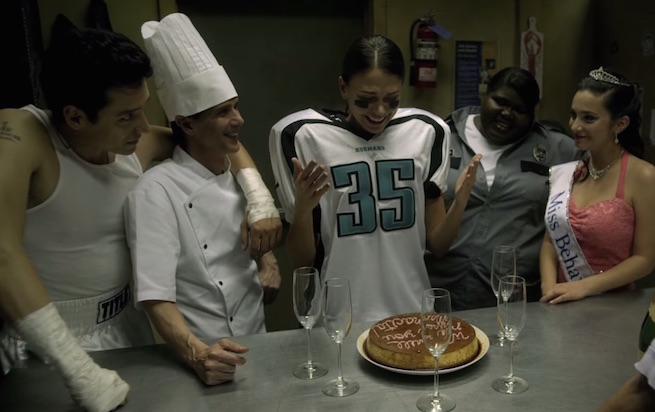 Starting GRAVY out with a quote by “Jack the Ripper’s first cousin, Jim” is a great way to set the stage for an irreverent, tongue-in-cheek gore ride. In this day and age of social media and people always posting quotes that no person has ever said, it’s also very relevant. 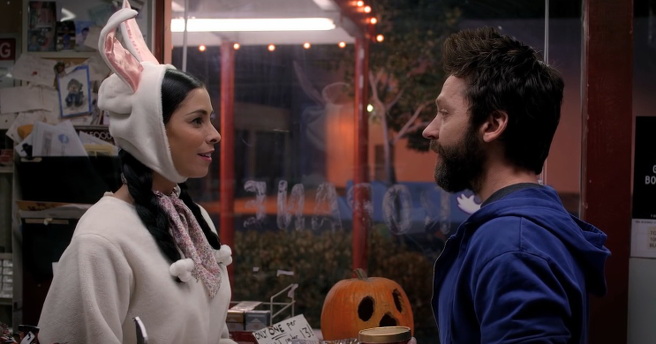 I absolutely love that this movie is set on Halloween. One of my favorite sub-sub-sub genres of horror movies are ones take place on Halloween, but are not part of the HALLOWEEN franchise. Don’t get me wrong, I love the original HALLOWEEN, but there is something about movies like HOUSE OF 1,000 CORPSES, HELLBENT, TRICK R’ TREAT, and the like that really earn a soft spot in my twisted little heart. Right from the get-go, GRAVY is a step in the right direction.

Seems as though I’m not the only excited for the holiday theme. We see Anson (Michael Weston) preparing for the night by stopping by a convenience store to pick up some sorbet, you know, it’s a real pallet cleanser. The store is decorated in vintage style decorations and looks very similar to another horror film set on Halloween, and one of my favorites, NIGHT OF THE DEMONS (1988). I like to think this deliberate. The dialogue between Anson (like Manson) and the geeky sore clerk Bethany Hadonsfield (Sarah Silverman) doesn’t seem scripted at all. If you are familiar with Sarah Silverman’s short lived television series THE SARAH SILVERMAN PROGRAM, it felt like something out of that. Bethany’s last name is not lost on me. Sure they are laying it on thick, but if you’re going to have a script smothered in in movie references you might as well go all in!
The awkward characters have me cracking up the whole time. It’s All Hallow’s Eve and everybody wants to close up at the Mexican cantina. The back-and-forth banter between French chef Yannick (Lothaire Bluteau) and and security guard Winketta (Gabourey Sidibe) is comedic gold. I love seeing Gabourey Sidibe doing comedy. I’ve thought she is hilarious ever since her hosting SATURDAY NIGHT LIVE. 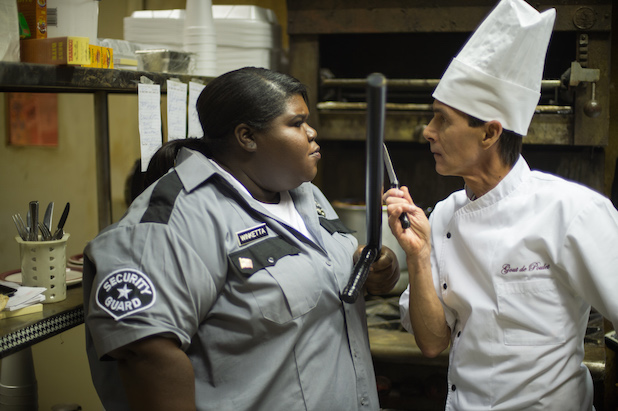 Unfortunately, the back door is stuck and nobody wants to go outside to see what’s up with it. Turns out Anson has welded it shut, and when group of coworkers inside the Mexican Cantina discover that he is inside and has now trapped them all in, it’s too late. Now everybody including the owner Chuy (Paul Rodriguez), his employees Kerry (Sutton Foster), Cricket (Molly Ephraim), Hector (Gabriel Luna) and a distraught costumer named Bert (Ethan Sandler) are trapped inside with Anson, his psychopath brother Stef (Jimmi Simpson), and Stef’s equally murderous girlfriend Mimi (Lily Cole).

All the characters are familiar movie tropes (thug, slut, etc.), but still quirky enough to not come across as boring. It has a very 1980s feel. Kind of like a horror version of THE BREAKFAST CLUB. Which in turn reminds me of MURDER PARTY, another one of my favorite horror comedies that takes place on Halloween. Oh, and Anson is dressed as a clown. Could this movie get any more perfect? 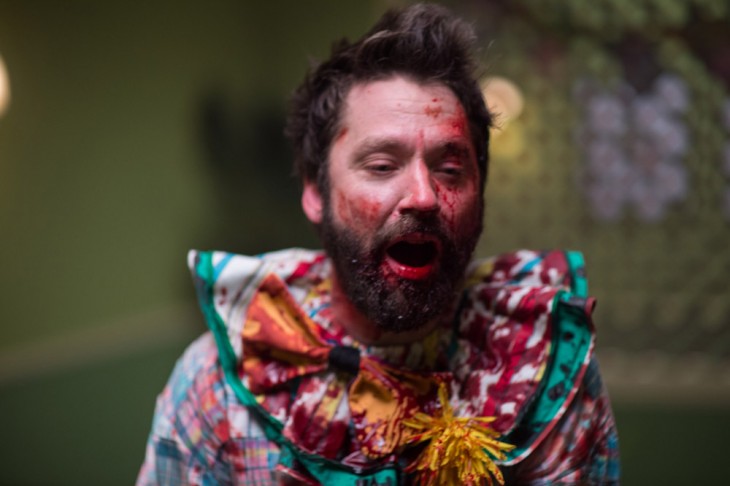 I know what would make this movie perfect –let’s make Anson, Mimi, and Stef not only psychos, but also cannibals who only eat human flesh on Halloween! More great dialogue between bad guys, and lots of great movie references, everything from mentioning CANNIBAL HOLOCAUST to a rousing game of Six Degrees Of Kevin Bacon.

The second act drags a little bit, but it’s still funny. The captors are playing party games with their victims to see who they are going to have Yannick cook up and eat. The humor is reminiscent of the style of IT’S ALWAYS SUNNY IN PHILADELPHIA. I’m not a huge fan of that show, but you add in the gore, Halloween, a clown, and I’m in love! GRAVY ends with a great level of absurdity, and at 1 hour and 35 minutes, it ends at just the right time. 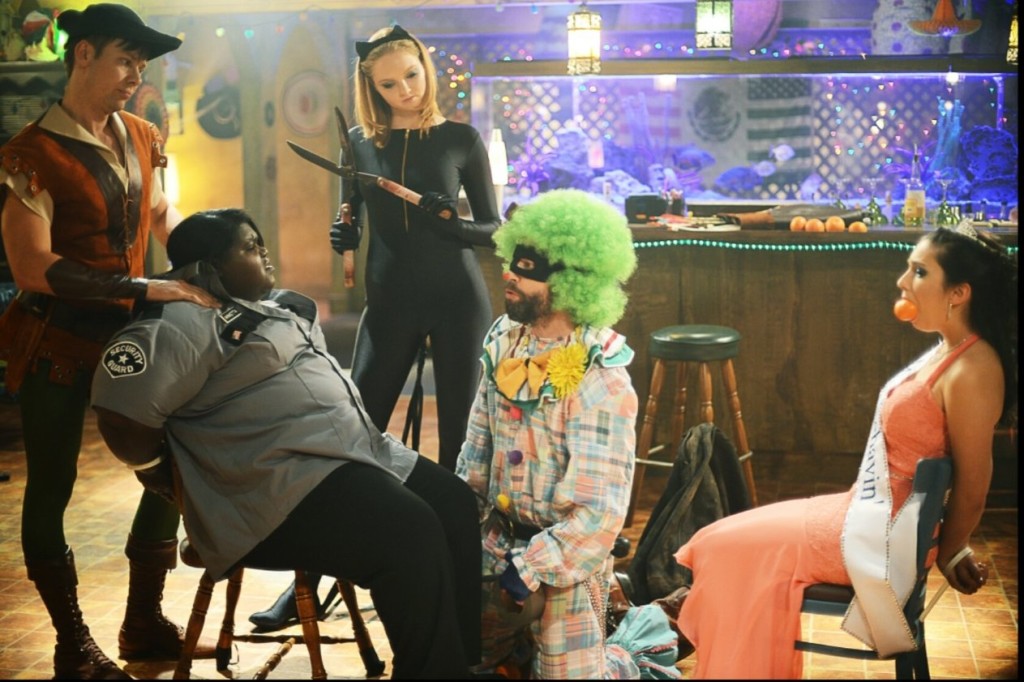 Between the sarcastic humor, and the the soundtrack that consists of a synth driven score, 80’s classics, silly songs (that sound like they were written by Sarah Silverman), and cartoonish sound effects used I was laughing the entire movie. Also, my fellow horehounds won’t be disappointed. Great gore throughout, and it’s all practical effects, no bullshit CGI. If you like your comedy served up rare and blood drenched then GRAVY will definitely hit the spot!