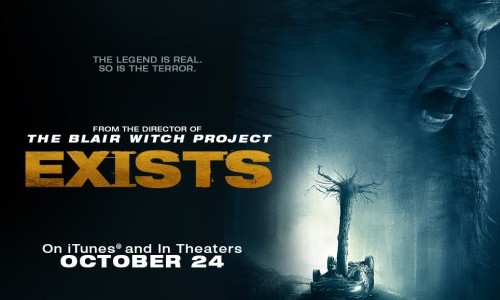 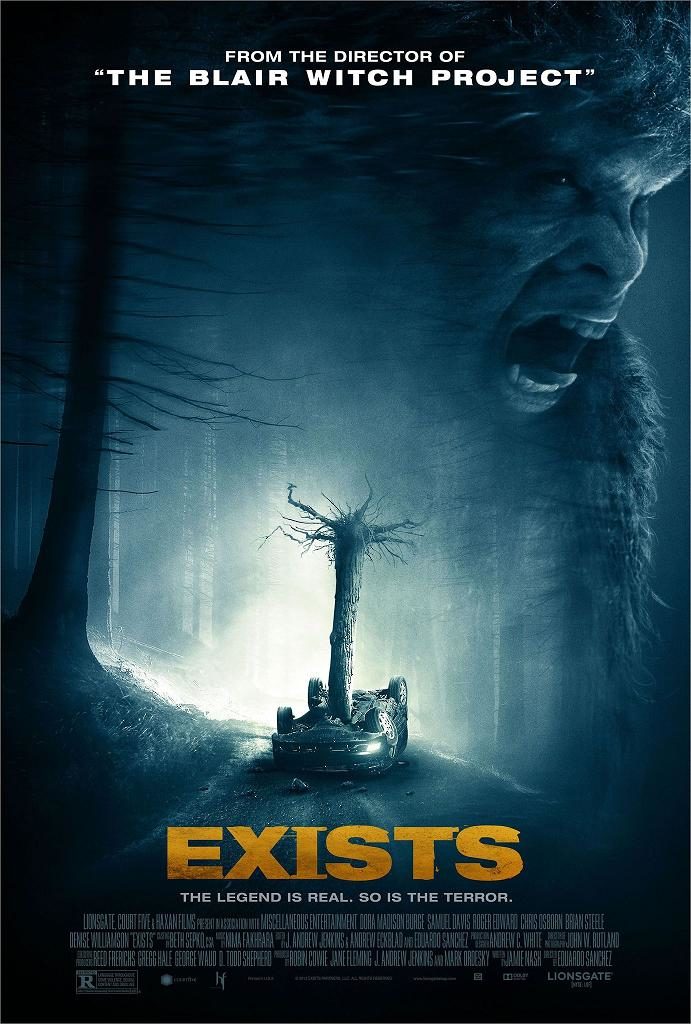 In the first edition of Calling All Cryptids, I examined Bobcat Goldthwait’s WILLOW CREEK, a film that attempts to stay true to Bigfoot lore while also creating an entertaining and scary found footage film. Now, I’m switching gears to Eduardo Sánchez’s EXISTS, another Bigfoot found footage film, which is much more violent and gruesome, showcasing an angry version of Bigfoot who is bent on destroying the humans that did it wrong. Sánchez is no stranger to the subgenre, as he directed the 1999 film, THE BLAIR WITCH PROJECT, a seminal piece of found footage horror. While EXISTS does hit similar narrative beats to THE BLAIR WITCH PROJECT, this film is all about showing you the monster and its revenge-fueled violent potential.

EXISTS begins with five young people heading off to a cabin in the woods of East Texas. The cabin belongs to the uncle of brother’s Brian and Matt, who abandoned it after seeing a Bigfoot in the woods. But they don’t tell their friends that; they just want to have a fun weekend in the woods. But that quickly goes awry when they hit something while driving to the cabin. They aren’t sure what it is at first, but when they look back at a recording, they see it was something on two feet and very hairy. Once the group arrives at the cabin, they hear what sounds like loud sobbing coming from the woods, like something is in mourning. They slowly realize that what they hit was a baby Bigfoot, and its mother is not happy about it. She decides to enact her revenge on the group, picking them off one by one.

In my last column, I wrote about how the Pacific Northwest is said to be the home of Bigfoot. However, East Texas (specifically the area between the borders of Oklahoma and Louisiana), where EXISTS takes place, is also a known Bigfoot mecca. In fact, this year Travel Channel named Texas one of the best places to spot a Bigfoot. But why East Texas? According to The Texas Bigfoot Research Conservancy, most sightings happen in the region because of its thick forests, minimal land development, and large water supply, everything a happy Bigfoot needs.

But how dangerous is Bigfoot really? Yes, they are reportedly massive bipedal apes who are extremely strong, but it’s not often that they use their strength against humans. In fact, there is only one reported death committed by Bigfoot, which was recorded by President Teddy Roosevelt in his 1890 book, The Wilderness Hunter. He describes an account given by an outdoorsman named Bauman. Bauman was out trapping beaver with a companion when they encountered what they described as a bear walking on two feet. However, it left human-like footprints. The creature, which had a foul smell, rummaged through their belongings, unnerving the trappers. One day, after Bauman returned from checking his traps, he returned to find his companion dead with his neck snapped and four teeth marks in his flesh. The size, appearance, and smell has led many to believe this was a Bigfoot encounter (you can read the full excerpt from Roosevelt’s book here). Perhaps the brutal deaths in Exists are not too far off from what Bigfoots are capable of doing to humans.

While Roosevelt was the first and only person to report a human death at the hands of a Sasquatch, there have been a slew of reported attacks throughout the centuries. In 1924, Fred Beck reported an attack by several Bigfoots in Ape Canyon in Washington State. He and his companions saw one of the creatures and shot at it. As night fell, a group of Sasquatch came and attacked their cabin; they even tried to pull apart the cabin’s logs. Footprints were found the next morning. This account, which some think is a hoax, may mean that Bigfoot revenge is not as far-fetched as it may seem. But it seems that as long as you don’t shoot at a Bigfoot, it should leave you alone.

The impetus of EXISTS’ events, though, involve a hit and run, not a gun. But, Bigfoot are not hit by cars as often as deer, making the actual reports of Bigfoot car accidents almost zero. However, last year, one Iowa woman blamed her car accident on a Bigfoot. She said she saw the 8-foot creature chasing after a deer on the side of the road. In her attempt to get a better look at it, she hit the deer it was chasing. Sadly, she didn’t have a dashcam to capture the event, like the camera used in EXISTS. If anything, Sanchez’s movie shows how it you constantly film yourself in the woods, you’re bound to capture evidence eventually.

While a Bigfoot mama on the search for vengeance is definitely a unique take, it’s not necessarily based on any true Bigfoot lore or accounts, though it seems Bigfoot are known to attack when threatened. Sanchez takes existing superstition and caution around a monster and weaves it into a horrifying account that feels all the more real through the use of handheld cameras and GoPros. He is a master of making the woods feel all the more terrifying, illustrating what could lurk behind the trees. Regardless of that fear, there is no need to worry about a Bigfoot attacking your tent. Just don’t shoot at them.