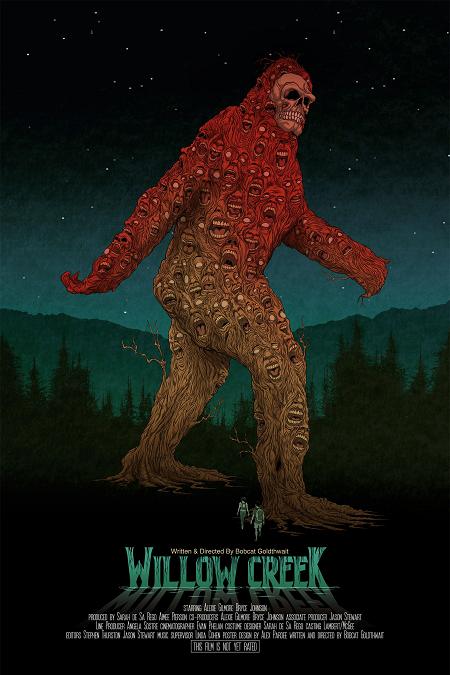 Welcome to Calling All Cryptids, a bi-weekly column where I’ll dive into a film about a legendary creature and examine just how true it is to its cryptid’s lore. For those unfamiliar with the word, “cryptid,” it is used to refer to creatures that exist through stories and sightings, but their existence hasn’t been confirmed by science. Some examples are Mothman, the Loch Ness Monster, and El Chupacabra. I’ll be examining films about each of these creatures, but to start off, I’m looking at the king of all legends: Bigfoot, or Sasquatch as he is all known. Perhaps the most well-known of the cryptids, the bipedal ape creature is said to roam the dense forests of the Pacific Northwest, though sightings have been reported throughout Canada and the United States. Bigfoot’s history is rich, with cryptozoologists and Bigfoot experts all sporting various theories about the beast. Bobcat Goldthwait’s 2014 found footage film, WILLOW CREEK, dives into the culture of Bigfoot and creates a film, that while about the scares, aims to showcase much of the reality behind the creature.

WILLOW CREEK follows a young couple, Jim and Kelly, who are heading to Trinity National Forest in Humboldt County, California to search for Bigfoot. It is a place full of thick and lush green forests, babbling brooks, and thick moss. It’s been Jim’s dream to film here, because it is the site of the famed Patterson-Gimlin footage. If you’ve ever seen a picture of Bigfoot, it’s probably from this footage. Filmed in 1967, Roger Patterson and Robert “‘Bob” Gimlin captured the first video evidence of what they claim in Bigfoot. It is grainy and shaky, but there is no denying that there is a large hairy creature walking across the frame. The footage has been the subject of jokes and parodies for decades, but it also has never been truly debunked. It stands as one of the best pieces of Bigfoot evidence found. With that in mind, Jim is determined to capture something on camera here and become like Patterson and Gimlin.

During their trek, Jim and Kelly stop in Willow Creek, which is a real town that is dedicated to Bigfoot tourism. In fact, Willow Creek considers itself the Bigfoot capital of the world. They hold a yearly festival called “Bigfoot Daze” to pay homage to the creature. Each restaurant and mural show in WILLOW CREEK actually exist in this town. There really is a restaurant that sells Bigfoot burgers, and massive statues of Sasquatch pepper the side of the road. It is truly the mecca of the Bigfoot community, and Goldthwait passes homage to that.

Further, Goldthwait interviews actual locals on camera rather than using actors. This lends an air of authenticity to the film, making it akin to the well-known THE BLAIR WITCH PROJECT. While WILLOW CREEK is a fictional film, it blends in modes of documentary to make it more than another monster movie about people getting murdered in the woods. Sasquatch has brought tourism to the town, so even regardless of whether or not he exists, there is no denying the money and attention he’s brought to the locals; he has become a way of life. Jim and Kelly even interview Tom Yamarone, the self-proclaimed Bob Dylan of Bigfoot songs.

In fact, the Animal Planet hit show, Finding Bigfoot, filmed in many of the same locations seen throughout the film. The squatching experts, Matt Moneymaker, Cliff Barackman, James “Bobo” Fay, and resident skeptic Renae Holland, visited Willow Creek to interview townspeople and experience a place that is essentially a shrine to Bigfoot. They even meet with Yamarone. Goldthwait is actually friends with the Finding Bigfoot crew. Even though he wasn’t present for their ‘Willow Creek’ episode, he was a previous guest in New Jersey, travelling into the woods with the team in New Jersey.

Goldthwait’s friendship with the crew shines through in how he portrays Bigfoot behaviors when Jim and Kelly finally enter the woods of Willow and Bluff Creek. Kelly plays the role of skeptic throughout the film, asking Jim questions like, “If Bigfoot is real, then why hasn’t a body been discovered?” This is often a question asked by skeptics to Bigfoot experts, and experts do have an answer. Some claim that Bigfoot could possibly bury their dead, a behavior picked up by watching humans. Other experts claim that their remains could merely be hidden deep in the woods where people can’t find them.

Then, when night falls, Jim and Kelly begin hearing knocks on trees and loud howls. These behaviors are documented by Bigfoot experts. Tree knocks and hitting rocks together are said to be a form of communication between Bigfoots over long distances. There are also several types of howls associated with the creature, such as howls, screams, and hoots, like the ones Jim and Kelly hear in their tent. Bigfoot experts are able to recreate these howls to try and speak with the cryptid. You can hear a few examples below.

While WILLOW CREEK ultimately ends with a bloodthirsty Bigfoot attacking the couple, Goldthwait he aims to create an honest and respectful portrayal of those who believe in the cryptid. He sticks rather closely to Bigfoot lore and reports to create his cryptid creature feature, so much so that apparently Finding Bigfoot’s Bobo was impressed. In an interview with IndieWire, he talked about a screening he did for Bigfoot believers and said, “I was actually nervous, because I didn’t want to make a movie that made fun of them. That’s too easy. My movies are always about the kooks and the outsiders. That always comes from a place of feeling that I am one of those people, so I wouldn’t want to make fun of them.” He taps into existing Bigfoot history, from the Patterson-Gimlin footage to the accounts of Bigfoot calls to create this film. Goldthwait even went on to make a documentary about Bigfoot in 2017 called AMERICAN BIGFOOT. It documents the Ohio Bigfoot Conference, where groups of believers and skeptics converge to discuss the cryptid. If you’re looking for a film that actually examines the lore of Bigfoot while also packing him some good scares, WILLOW CREEK is the perfect pick.