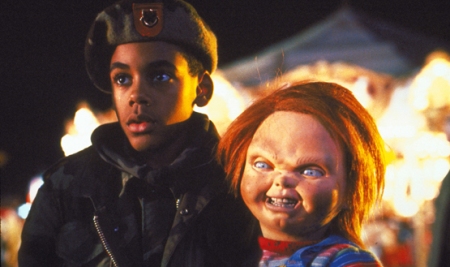 When CHILD’S PLAY came out in 1988, the films about killer dolls that had entered the popular culture could be counted on a hand: DOLLS (1987); POLTERGEIST (1982); TRILOGY OF TERROR (1975); and the Talky Tina from The Twilight Zone (Season 5, Episode 6, 1963). What Don Mancini realized when he was writing CHILD’S PLAY in his early twenties, was that the combination of the then-fading slasher movie boom and the killer doll movie had never been truly explored in feature-length (though TRILOGY OF TERROR does feature the two genres combined to form an almost proto-CHILD’S PLAY, the abbreviated length of the sequence — limited by its inclusion in an anthology film — left much to be expanded on). To say that CHILD’S PLAY kicked off a cycle of killer doll films would be true, but also too simplified; the only films of note within the cycle between 1988’s CHILD’S PLAY and its 1991 sequel CHILD’S PLAY 3 were the Charles Band produced PUPPET MASTER (1989) and PUPPET MASTER 2 (1991). However, within two months of the release of CHILD’S PLAY 3 there would be a third PUPPET MASTER film and DOLLY DEAREST (1991). Within a year there would be SILENT NIGHT, DEADLY NIGHT 5: TOYMAKER (1991); DOLLMAN (1991); and DEMONIC TOYS (1992). By the end of the decade, there would be more than could be counted on your hands, including another Chucky film: BRIDE OF CHUCKY (1998).

CHILD’S PLAY 3 was released just prior to the floodgates of killer doll films the series kicked off, however, it can also be said to be working within another of the horror cycles that had been active throughout Cinéma Dévoilé: the tiny killer film, as popularized by LEPRECHAUN (1993), which saw a similar, though smaller, boom. Directed by Jack Bender, who recently sat the director’s chair on episodes of Game of Thrones, at a cost of $13m USD, CHILD’S PLAY 3 would appear to have more of claim to legitimization than has yet been seen on Cinéma Dévoilé. However, being the second sequel of a film series that has yet to try anything new in the plot — killer with his soul trapped inside of a plastic doll tries to use black magic to place soul into a child. Released three years after the first film, the main character – Andy – has now aged from eight to sixteen, thus creating a barrier for contemporary audiences of the time’s ability to immerse themselves fully within the story. This failure of immersion further troubles the film’s ability to raise the audience to a state of terror at what is nothing more than a child’s plaything, a doll that lacks the muscles of its human victims. The first film can be seen as a clever parody of the slasher genre from written from within the genre, as proto-SCREAM (1996), but the string of sequels that followed take themselves far too serious to be considered the same – until BRIDE OF CHUCKY, which returned to the comedic nature of the first film, albeit with a more on the nose delivery. CHILD’S PLAY might have a budget but it’s still devoid. 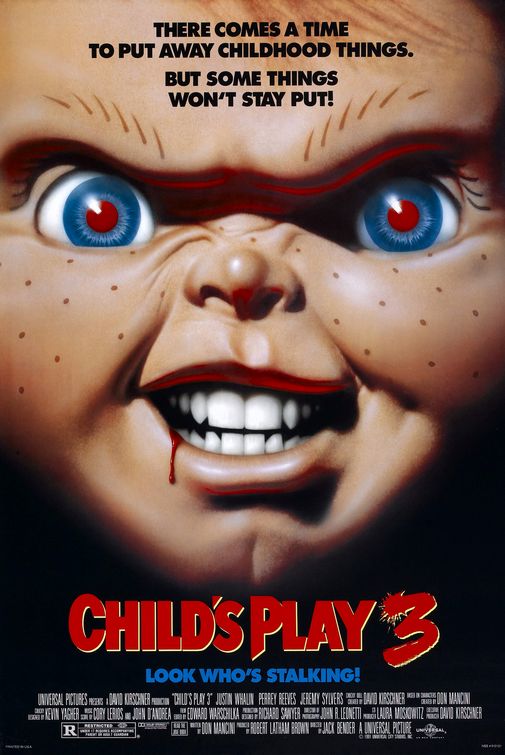 In much the same way that I discovered the films of Cinéma Dévoilé when I was growing up through this period, it is the goal of Cinéma Dévoilé to approach the film irrespective of prior knowledge and judge them not within the history I have described but as a film that stands alone. In CHILD’S PLAY 3, we are first introduced to a factory that has been taken over by cobwebs and it is here that we see the melted form of a doll stabbed through with a hook. As blood flows from this ragged form, it mixes in with the melted plastic left in it’s vat which is then drained — its drainage and eventually formation into a the figure of a doll take up the next several minutes and make for a captivating credit sequence. It is up to the audience to realize that the blood is a bad omen, a case of evil transferred that seems to reference the Hammer Picture’s film TASTE THE BLOOD OF DRACULA (1970). The film lays out backstory in a bit of forced exposition: the eight year old Andy claimed that his Good Guy doll, Chucky (Brad Dourif), was host to the soul of serial killer Charles Lee Ray and that it had attempted to kill him. When we see said doll — reconstructed, we are to assume from the opening credits, with the blood infected plastic – attack and murder the head of the company that produces the Good Guy dolls, we are left inclined to agree with the young Andy. Chucky follows teenage Andy (Justin Whalin) to the military academy he has been sent to and, through arbitrary rules the audience is not given knowledge to understand, spends the rest of the movie trying to transfer his soul into the body of a younger child and murdering random people. Eventually the action moves from the military academy to a nearby fairgrounds for it’s final showdown between doll and man.

It’s not hard to see the flaws within CHILD’S PLAY 3 and the ways that it plays to cliche rather than attempt to be creative. The deaths in the film play as a series of murder vignettes that do little to advance the plot. There really is not much plot within the 90-minute run time to be concerned with. However, the murders themselves are entertaining to watch and the one liners the killer spouts — “Nothing like a strangulation to get the circulation going” — are enjoyable for the camp value. There are moments of stunning brilliance to be found, as well. The film plays to its killer strengths — his devious nature and small size – by having him sneak into the armory and exchange paintballs for live ammunition prior to the academy’s wargame exercise; the chaos that ensues is the more rewarding for its cause being located in the stealth of the doll rather than in the physical impossibilities that are demanded by his role of slasher movie villain.

The most interesting aspect of the film is by far the use of settings and the different feels that they lend the movie. We travel from a worn-down factory/business headquarters to a military academy to the bright lights of a fair; it gives the feel of traveling through a gothic post-industrial capitalist nightmare to a TAPS-inspired fish out of water fever dream to an expressionistic journey out of Dante’s Inferno. It is in the way that the film manages to provide these artistic homages while having a story focused on the most ludious of movie monsters that the camp value of CHILD’S PLAY 3 shines the brightest. The time and dedication that had to be given to perfecting every shot within the film is commendable. It was the first feature film of cinematographer John R. Leonetti who would, during the time of Cinéma Dévoilé, do the cinematography for several episodes of Tales From the Crypt (1988-1993) and direct MORTAL KOMBAT:ANNIHILATION (1997); more recently he did the cinematography for THE CONJURING (2013) and directed THE BUTTERFLY EFFECT 2 (2006) and ANNABELLE (2014).

CHILD’S PLAY 3 is the perfect example of the positive side of Cinéma Dévoilé. Fun performances (particularly Brad Dourif in the role of Chucky), quirky special effects and a narrative that makes little sense (the film gives no damns about Chucky’s offscreen geographical positioning) all come together to make a film that is far better than deserved for the second sequel about a killer doll.