Beyond appreciation, there lies fandom.

Beyond fandom, there lies obsession.

Beyond obsession, there lies Doug Tilley.

There’s no explanation needed as to why cinematic and television output of actor Eric Roberts is a fascinating thing to explore. Emerging in the late ‘70s and early ‘80s as a supremely talented actor with performances in films like STAR 80, KING OF THE GYPSIES and RUNAWAY TRAIN, by the ‘90s, Roberts had become one of the most insanely prolific actors working in Hollywood (and any other locale that happened to be shooting a movie at the time), appearing in over a dozen films each year by the mid-2000s, a workload the 61-year-old actor continues to this day. Among the way, Roberts has appeared in countless genres, ranging from music videos to sitcoms, from faith-based dramas to HUMAN CENTIPEDE 3 to THE DARK KNIGHT to A TALKING CAT!?!. You could pretty much watch the filmography of Eric Roberts and check every type of media genre in history off of your list. 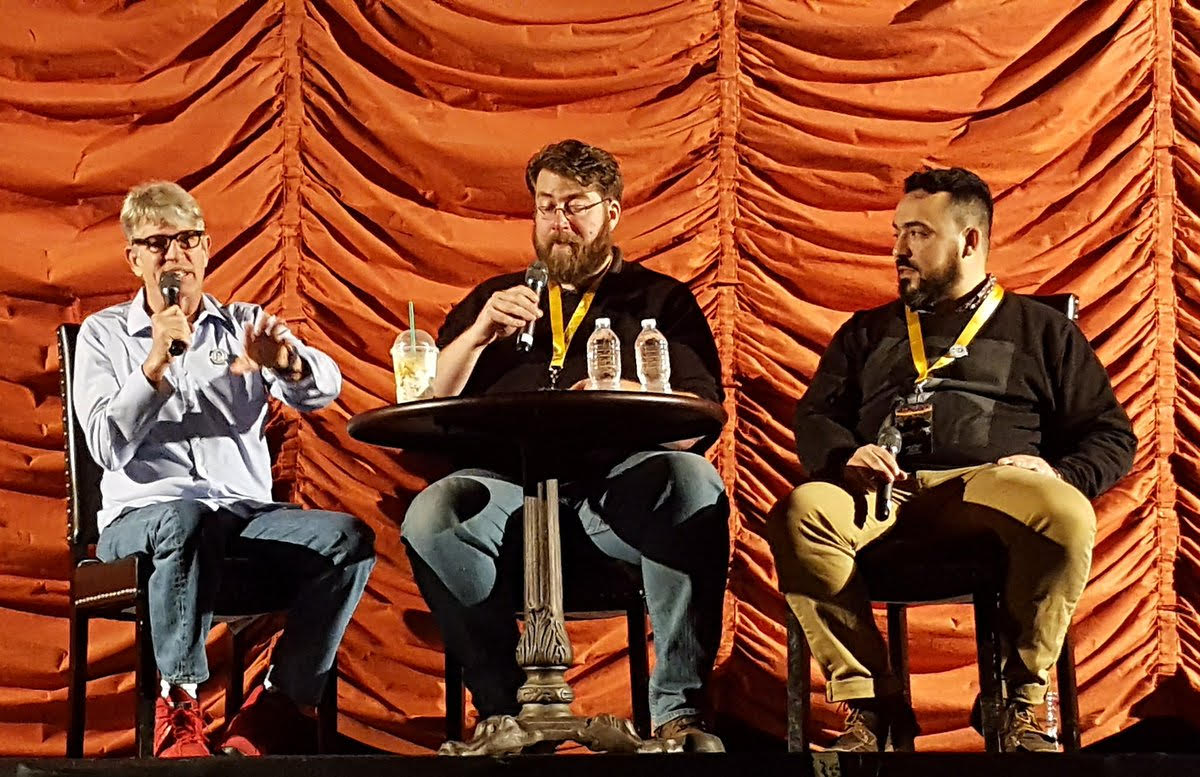 Doug Tilley has been doing that since 2015, when he and co-host Todd Rigney began the podcast ERIC ROBERTS IS THE FUCKING MAN, named from a comment pointed at Roberts by friend Mickey Rourke at the 2009 Independent Spirit Awards.   Tilley, already an old pro at the podcasting game from his long-running NO-BUDGET NIGHTMARES podcast, would spend the next two years and 61 episodes exploring the output of the aforementioned fucking man, with Rigney bowing out to spend more time with non-Eric Roberts related activities and Cinepunx founder Liam O’Donnell taking his place.

This past weekend, this exercise finally reached its pinnacle at Chicago’s Cinepocalypse Film Festival at the Music Box Theater, when Eric Roberts himself agreed to be the duo’s third guest host on their most recent episode. What would happen when the hunter became the hunted? Would it be strangely awkward, like when “Scaredy-Cat Stalker” zine writer Krista Garcia met Henry Thomas? Would it become a twisted cat and mouse game that would serve as a premise for an upcoming Lifetime film called STALKED BY MY PODCASTER with Eric Roberts as Doug Tilley and Bruce Greenwood as Eric Roberts?

Thankfully, the results were so much better, with an affable Roberts being very welcoming of Tilley and O’Donnell’s in-depth look at his career. He didn’t even threaten to sue them, much to their relief.

Among the topics covered in the podcast were:

The podcast recording was followed by a screening of Larry Cohen’s THE AMBULANCE, for which Roberts was joined by Cohen for a Q&A after the film – a special treat, as the film received only a negligible theatrical release in its initial run. You honestly couldn’t wish for a better, more Eric Roberts-filled day at the movies.

Be sure to keep tabs on all things Eric Roberts and listen to the podcast itself at the ERIC ROBERTS IS THE FUCKING MAN site here!