One of the greatest pleasures of any film festival is the discovery of a film that comes seemingly completely out of nowhere and blows your mind. The excitement generated by such a find is directly proportional to how rare they are; this is compounded by the ready availability of information online about virtually any movie in production on the planet at any given time. If one tries to keep up on what’s in the works or coming soon, it can be tough for something really special to sneak under the radar. This is what makes Johnny Kevorkian’s AWAIT FURTHER INSTRUCTIONS a great “festival find,” a film that appeared out of the ether to steal the show at this year’s Cinepocalypse. It’s also destined to be a Christmas horror classic. 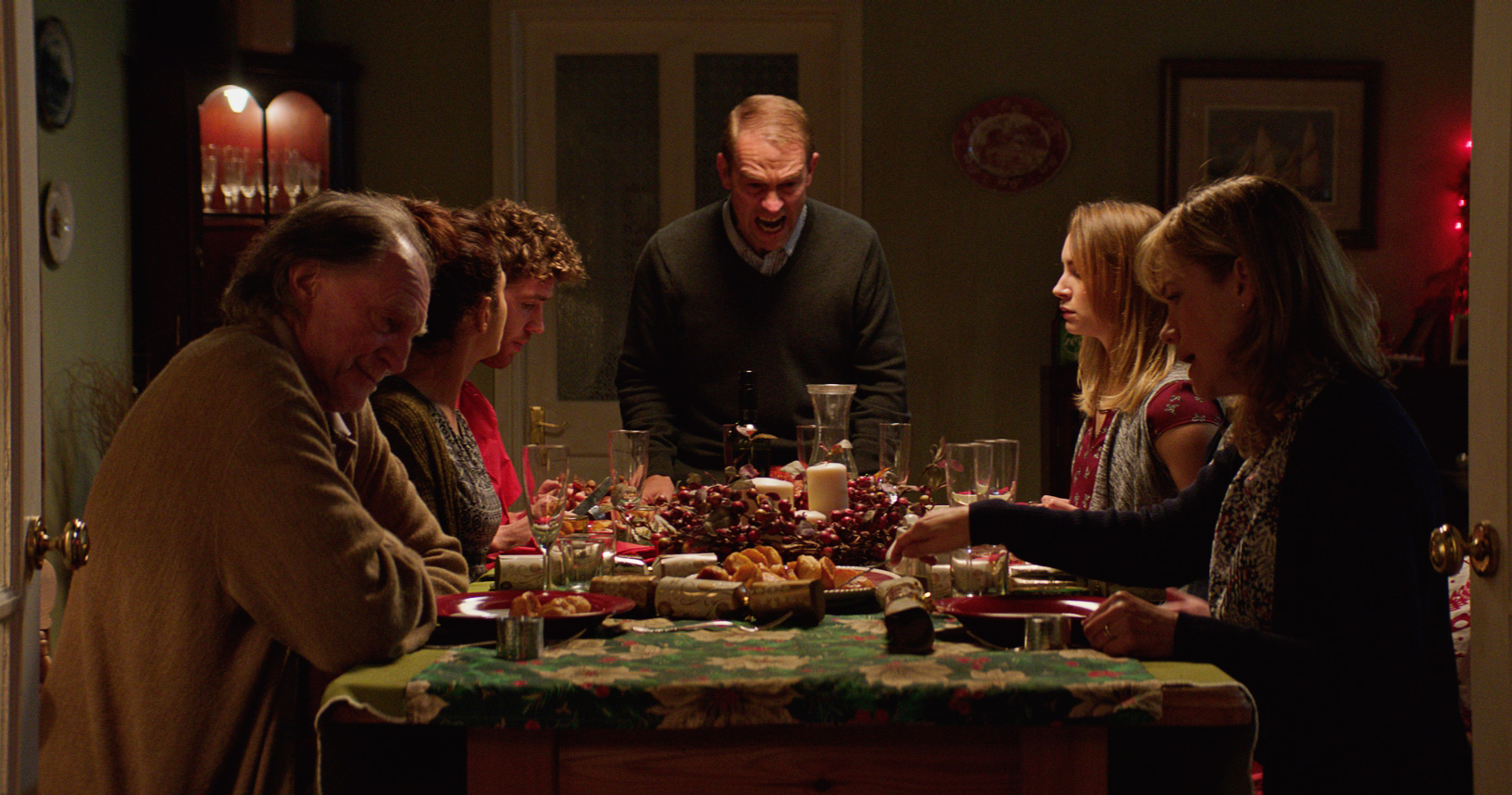 Nick (Sam Gittins) is taking his girlfriend Annji (Neerja Naik) to meet his family for the first time at Christmas. He’s been out of touch with them for years, and shortly after the introductions are out of the way it’s obvious why: Granddad (David Bradley) is a racist who loves berating Nick’s dad Tony (Grant Masters). Tony, in turn, tries to run the household like a business and he’s clearly eyeing son-in-law Scott (Kris Saddler) to take Nick’s vacant spot in the family hierarchy. Nick’s sister Kate (Holly Weston) is heavily pregnant and painfully self-absorbed, leaving only their mother Beth (Abigail Cruttenden) trying to hold the family together for a nice Christmas visit. Unsurprisingly, once everyone sits down to dinner, her plans go straight to hell as tensions reach a breaking point. Nick and Annji plan to leave in the middle of the night so they don’t have to deal with any more yuletide misery, but when they open the front door they find it blocked by a black metallic substance. The same thing covers every door and window of the house, and once the rest of the family wakes up a mysterious message appears on the TV in the center of the living room: “REMAIN INSIDE. AWAIT FURTHER INSTRUCTIONS.”

From there, AWAIT FURTHER INSTRUCTIONS goes wildly, unpredictably out of control. Writer Gavin Williams establishes each character as an individual with understandable drives and emotions, and the cast does an excellent job of creating them in a short amount of time before the situation escalates. And it certainly does, as the messages on the television become increasingly ominous and worryingly specific. Director Kevorkian uses the single location to maximum claustrophobic advantage, creating an atmosphere of dread and paranoia that admirably ratchets up in intensity as the hours tick by inside the house. The underlying themes of the story are hardly subtle, but that’s not really a complaint–sometimes a scalpel makes for effective satire, but sledgehammers certainly have their place. AWAIT FURTHER INSTRUCTIONS is much more the latter than the former, using its surreal setup as a way to explore issues of xenophobia and authority that feel unfortunately timeless. 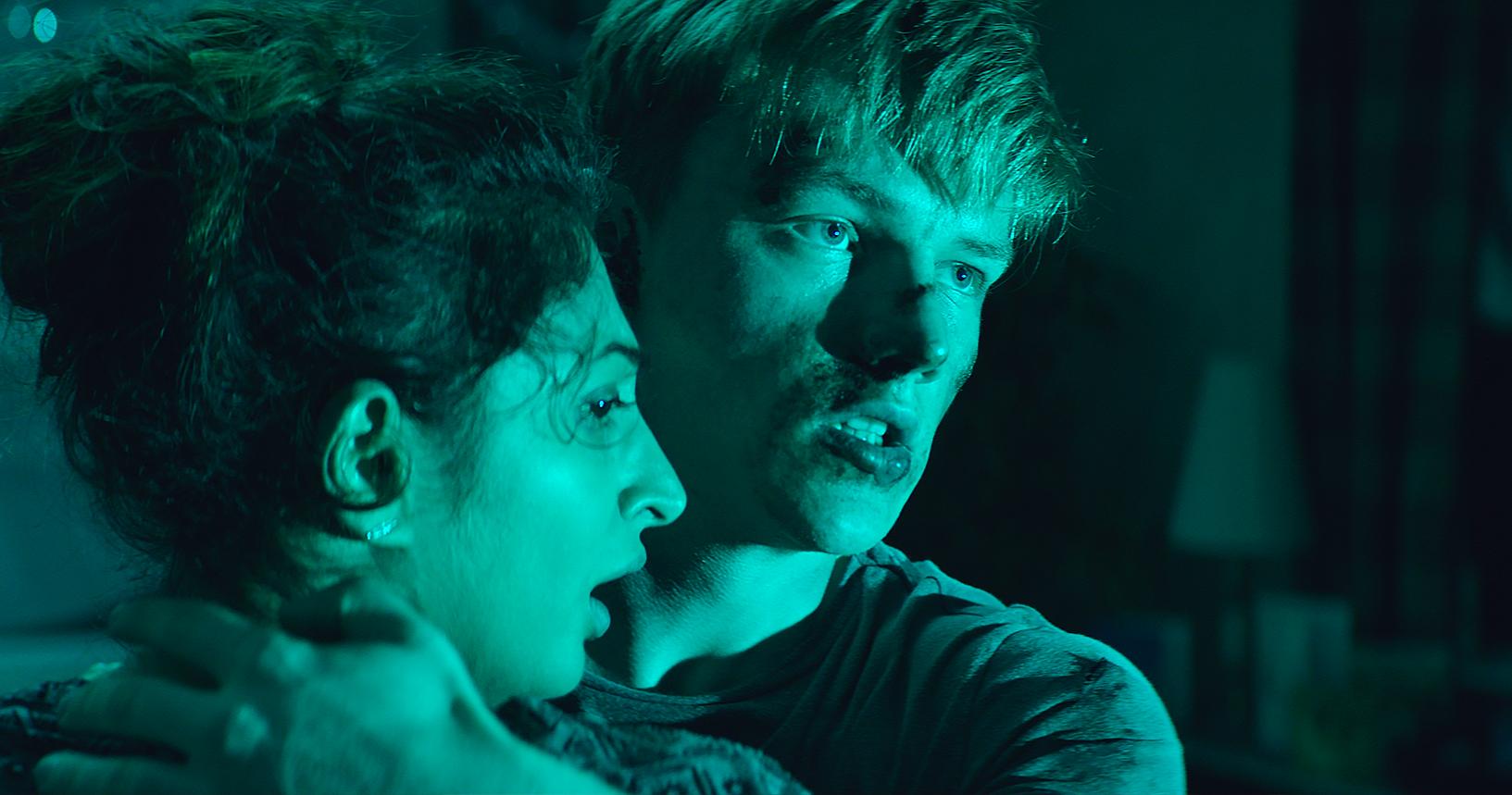 At the film’s Cinepocalypse screening–its world premiere–the filmmakers specifically said they wanted to be able to look at the first five minutes of the film and the last five minutes and have no idea they were from the same movie. It’s difficult to talk much about the film without giving away too much of the game, but suffice to say they succeeded in grand fashion. There’s something about the basic foundation of the story that lends itself to uncomfortable humor, but as the possible explanations narrow the film jets off into some strange territory that recalls a number of sci-fi/horror touchstones. Naming any of them specifically would spoil the fun, but the film never feels derivative–Williams and Kevorkian have synthesized some highly unexpected genre influences and the family comedy/drama into something unique. AWAIT FURTHER INSTRUCTIONS is a fantastic siege horror film with a brilliant twist, and is well worth keeping a look out for when it gets a wider release here in the States courtesy of Dark Sky Films.