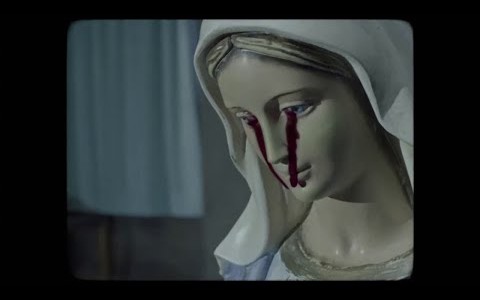 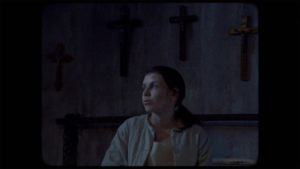 It is incredibly hard for a filmmaker to do anything new with a subgenre like found footage. The tropes and shorthand way of communicating with the audience are embedded into the DNA of this style of filmmaking. So any found footage film that tries to find a new wrinkle normally gets on my good side. THE DEVIL’S DOORWAY does try to find something new by turning in a period piece that is supposed to have been shot on a 16mm camera. Unfortunately, the filmmakers not only squander that unique element, they also torpedo a decent, if familiar, haunting/possession story rooted in some ugly real-world horrors by smothering it in standard found footage clichés.

Set in Ireland in 1960, the film tells the tale of Father Thomas (Lalor Roddy) and Father John (Ciaran Flynn), two priests sent to one of the Catholic Church’s infamous Magdalene laundries to investigate a possible miracle. Thomas is older and disgusted with the practices of the Church—including the sending of women deemed problematic (unmarried pregnant women, mentally ill, orphaned, and others who do not fall into their narrow view of how women should behave) to work as slave labor in the laundries. John is younger and desperate to believe the possible miracle (a statue of the Virgin Mary supposedly crying tears of blood) they have come to investigate is true. 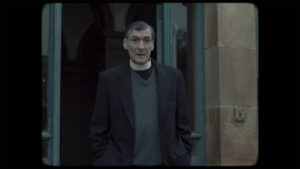 John uses a 16mm camera to document their investigation that includes interviewing the prickly, unhelpful Mother Superior (Helena Bereen). When Thomas tires of John constantly filming him scraping dried blood from the statue, he sends him off to capture footage of the horrible working conditions and punishments the women are forced to endure, exacerbating tensions between the priests and the nuns.

Information from a guilt-ridden nun sends the two priests into the bowels of the laundry where they discover a pregnant teenager named Kathleen (Lauren Coe), chained to the wall, filthy, and nearly starved. Furious, Thomas clashes with the Mother Superior about Kathleen’s treatment, even as it becomes apparent that not all is right in the head with Kathleen. Director Aislinn Clarke does not take much time establishing—via moments captured on film while the priests aren’t looking—that the cause of Kathleen’s behavior is supernatural and not mental illness, clashing with Thomas’ staunch refusal to believe in an evil beyond that which man is capable of committing.

Many of the themes present in THE DEVIL’S DOORWAY are right in my wheelhouse: righteous anger at the hypocrisy of organized religions that commit evil in the name of supposed good, basing horror in actual events, and debates about the merit of faith outside of religion. Frustratingly, these bigger ideas get sidetracked by a plot cobbled together from bits of THE EXORCIST, THE LAST EXORCISM, and any other number of “evil nun” and satanic panic flicks. 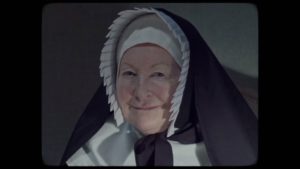 Even more annoying than the plot feeling like a surface-level pastiche of many other films is the use of the found footage genre to tell the story. Had the filmmakers presented their plot as a straight narrative, it might have been familiar, but it could have potentially been a decent genre film that dug into an exploration of how people try to create a supernatural reason for their evil ways. Instead, the found footage angle quickly overshadows everything with the expected shaky cam shots, jump cuts, and figures appearing in panning shots only to disappear when the startled cameraperson whip-pans back.

While I expect all the things I’ve complained about from every found footage film, what makes their use in THE DEVIL’S DOORWAY particularly frustrating is that it did not even need to be done as found footage. Even worse, the filmmakers do not commit completely to the found footage style. The sound design is very modern in places, with sounds effects being heard from different sides of the frame in a way that never could have been captured with the single microphone used by John for interviews. More confusing is that the film is completely scored, complete with stingers accompanying the jump scares.

If it sounds like I am nitpicking at this point, I suppose it is because I am. Based on the story synopsis I had read going into the film, I had high hopes for THE DEVIL’S DOORWAY. Watching the filmmakers shoot themselves in the foot was infuriating. There is a decent film trapped under the forced clichés of its chosen genre. It is just too bad that it never made it to the screen. 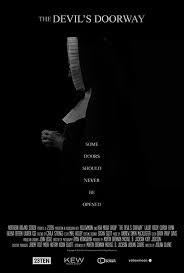