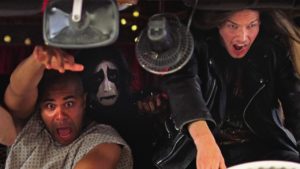 The story starts as you might think; with a bunch of weirdo Finnish death/black metal dudes cranking out metal cover tunes in their parents’ basement. Their first practice is interrupted by someone’s nice parents coming down between symphonic grindcore tunes to let the boys know supper is ready and the whole band goes upstairs to eat. The parents are supportive, but of course they don’t get it.

Neither does anyone in the small town they live in. Turo (Johannes Holopainen), the bands singer, gets tons of homophobic insults thrown his way on a daily basis (he’s not gay, but he has long hair). All the dudes have the typical decent jobs that twenty-something rock band weirdos get, and no one understands them there either. Add to that some inner band strife, with some of the dudes dying to get out there and play and some of the dudes content to just jam with their friends in the basement. If you’ve ever played in band, on any level, you will relate to these dudes.

You can pretty much guess most of the plot points from here. A chance meeting with a metal music VIP may or may not lead to a big break for them. Will there perhaps be a bad warm-up gig? Possibly some more band arguments? Maybe an attractive small town blonde girl (who isn’t into metal) for a member of Impaled Rektum to fall in love with? And no, the journey to the big gig will not be easy either. The plot is predictable, but it doesn’t matter, HEAVY TRIP really fucking works because it’s funny and the characters are all crazy likable.

The jokes about metal are all pretty spot on. Part of the charm of this movie is that while it certainly sees the humor in heavy metal, it’s not at all shitting on metal and metal fans. The movie understands metal, and it also gets a concept that I often espouse: that it’s far more intriguing to be passionately into something stupid than just being interested in the boring shit everyone else likes. I have to imagine a few metal dudes must have been involved with writing this film

The only downer is that it’s kind of hard to go the full THIS IS SPINAL TAP or CB4 route with black/death metal as most of those bands are so over the top anyway (Really, is Impaled Rektum any more ridiculous of a band name then Aborted Fetus or Rotting Christ?). Plus, it’s hard to write funny songs when you can’t understand any of the lyrics anyway. It’s also worth noting that Lauri Porra of the band Stratovarius, who is certainly more than legit for this style of music, handled the film’s soundtrack.

But none of that changes the fact that HEAVY TRIP is awesome. It’s the best rock and roll film in at least a decade. Go see it. 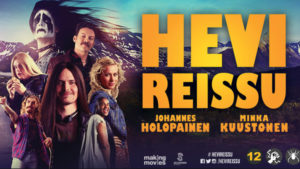