The post-apocalypse film has made a huge comeback in the last few years, with filmmakers discovering that the concept of a world in which humanity’s reign as the ruler of the planet is coming to its end is both timely and presents some great opportunities for storytelling.  As of late, these tales have tended to take one of two directions, those films that use the concept as a method of creating outrageous, oddball speculations as to what may be (THE BAD BATCH, TURBO KID, DOOMSDAY) and those that use the imperiled future as a source for drama, exploring what happens to the humanity involved (THE ROAD, YOUNG ONES, Z FOR ZACHARIAH, CARGO).  Also, sometimes there are zombies.

THE DOMESTICS, the debut film from director Mike P. Nelson which launched this week’s Cinepocalypse Film Festival in Chicago, is an attempt to do both, taking themes from THE WARRIORS and the original MAD MAX and mixing in a little BLUE VALENTINE.  Don’t, however, assume that these influences prevent THE DOMESTICS from being very much its own beast, as THE DOMESTICS treats its path with a unique style and voice, feeling familiar without ever coming off as well-worn.  (Also, no zombies.)

Mark (Tyler Hoechlin) and Nina (Kate Bosworth) live in a relatively safe community in northern Minnesota an undisclosed time period after the “reset button” has been hit on humanity, rendering much of the United States’ larger locales dead.  In an effort to get back to Nina’s parents, to whom communication has been sporadic, the pair gets into their station wagon and heads back through Wisconsin to Milwaukee, venturing their way through lands controlled by various colorful gangs with gimmicks comforted only by the occasional voice of a radio DJ who plays the oldies in between advising our title characters on what’s happening in the world.

Okay, so the setup is so THE WARRIORS (even the title of the film could be considered an homage) that you’re surprised Sol Yurick doesn’t get story credit, but the way THE DOMESTICS goes about its business is clever and often unexpected.  The gangs are colorful, sure, but Nelson’s script and the performances involved allow for just enough nuance in the characterizations that even the most minor characters feel as though they have a backstory, never becoming the clichéd archetypes of “masked street tough” that they easily could be.  They don’t feel like gangs that have cropped up out of nowhere, like so many post-apocalypse films, but rather the natural progression of people that were once very acclimated to societal structures (and some that desperately cling to them) and are now free to do as they see fit.

The results mean that THE DOMESTICS plays less as a straightforward MAD-MAX-meets-THE-WARRIORS clone than an action film with an undercurrent of satire and humor, a film a bit more closely aligned to the likes of A BOY AND HIS DOG.  Even better is that the humor comes naturally from the characters and never seems strained – for the most part, the moments of levity feel like genuine ramifications of the characters and situations that the film has set up, rather than comic relief there to relieve the downbeat nature of the central plot of a couple struggling to maintain their relationship.

THE DOMESTICS doesn’t delve into many details about the circumstances of the event, and it’s all the better for it.  The best science fiction films don’t need to explain everything that is happening in great detail – they only need to convince the audience that it and the characters within it have an understanding of the unexplained, and THE DOMESTICS does this quite well.  (One gang, a reveal towards the end of the film, is an exception that strains the bounds of incredulity, but hey, it’s a minor nitpick.)  The film has enough on its plate, juggling a well-defined relationship, several batches of bizarre roaming apocalyptic gangs, a humorous subcurrent and, oh yeah, plenty of action that leads to some pleasantly unexpected plot turns.  It’s not “hard sci-fi,” but THE DOMESTICS understands that it doesn’t need to be – it’s a crowd-pleasing action drama satire that manages to be all of these things pretty darn well. 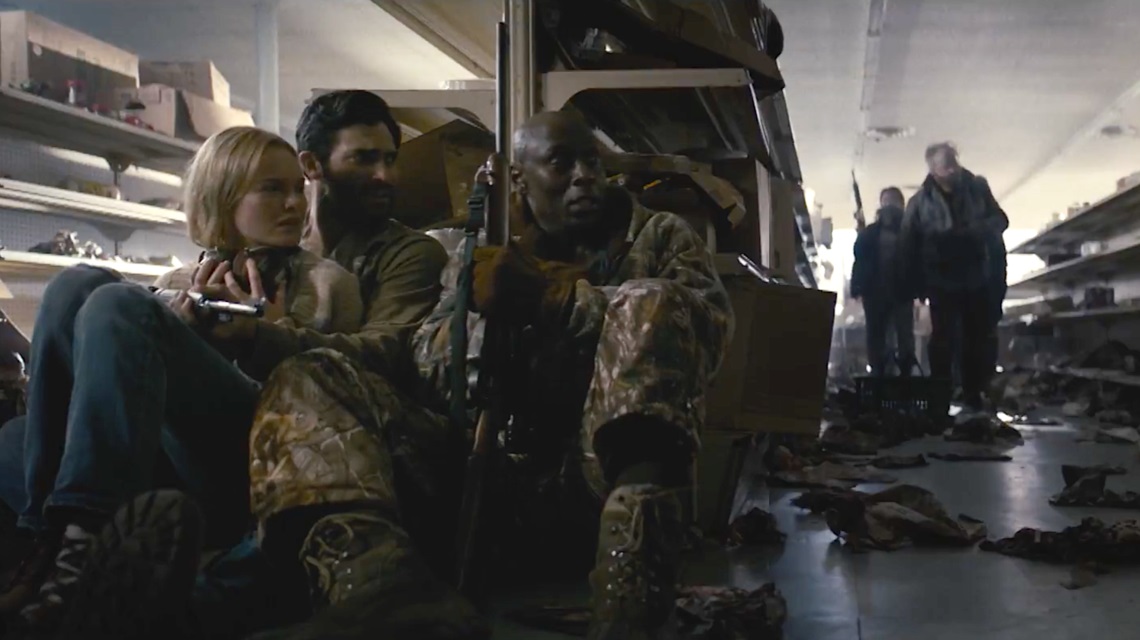 I hesitate to use the term “comic book-like” as it’s a pretty wide net to cast for a film, but THE DOMESTICS feels like the adaptation of a really great serialized indie comic story, down to the episodic structure of the journey and the gangs that have names that feel like plural forms of a golden age comic book villain, like The Ghosts and The Gamblers.  Even the casting, with Supergirl’s Superman Hoechlin and SUPERMAN RETURNS’ Lois Lane Bosworth giving an underlying subtext of the gender politics of comic book lore in the central relationship, lends the film a little bit of a comic touch in the best way, embracing the action aspects while exploring the stereotypes of the format in a compelling way.

If you’re a fan of post-apocalyptic drive-in flicks (and, this is Daily Grindhouse, so I’ve got to make assumptions), there’s no good reason not to check out THE DOMESTICS.  It’s a wild, hugely entertaining ride that takes old concepts and mixes them up in new and interesting ways – exactly what an opening night film at a genre film festival like Cinepocalypse should do.  Mike P. Nelson is a talent to look out for, and THE DOMESTICS is about as assured a debut as one can yet.

THE DOMESTICS hits select theaters and VOD on June 29.