By now, just about everyone has heard a story of a Bill Murray encounter. Or they’ve heard a story about a story about bumping into Bill Murray. The 67-year-old actor has spent the last decade or so honing his legacy from a reputation into a mythology. The new documentary THE BILL MURRAY STORIES: LIFE LESSONS LEARNED FROM A MYTHICAL MAN, which is playing at Cinepocalypse with director Tommy Avallone in attendance, serves as an examination of the legend and not merely a rehashing of anecdotes.

Don’t be too concerned, there is plenty of sharing of these now-infamous encounters with the man himself. You know the time Murray crashed a couple’s engagement photoshoot? Rather than just retelling this well-known story, Avallone tracks down the photographer and gets his first-hand account of the incident. And when Murray showed up in Austin and started to bartend? The bartender who shared bar duties with him that night is there to tell that tale as well. 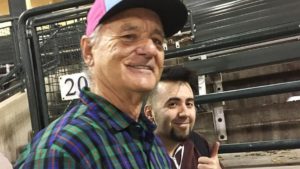 In addition to having these actual Bill Murray event participants interviewed, THE BILL MURRAY STORIES adds to the existing documentation with creative reenactments of the encounters. Historical reenactments have a bad reputation, due in large part to programs like Unsolved Mysteries and Rescue 911. THE BILL MURRAY STORIES is very aware of the hokey heritage and leans into this legacy. The film’s re-enactments feature a regular man in a comically terrifying Bill Murray mask. The facsimile of the actor adds to the absurdity of the reenactment, acknowledges its silliness, and was one of my favorite artistic privileges taken in the film.

But beyond these retelling of Murray encounters is some honestly fascinating examination of the pattern of activity and its intersection with Murray’s career. As much fun as it would be to just laugh at one Murray campfire story after another, it is this analysis which elevates THE BILL MURRAY STORIES to be a great and introspective documentary. We will never really know why Murray does what he does, but we can read through the lines and see what he might be conveying in these myth-making exploits. And it is through this emerging pattern of behavior that we can start to deconstruct the legend back into the man.

Perhaps I’m reading too far into this, and perhaps I’m grasping at straws for some reason within this chaotic world, but the myth of Bill Murray feels like an honest attempt by a man to just spread some comfort in the world. The proposed Taoist roots of his behavior are ones not of blind enthusiasm, nor of blind pessimism, but of acceptance and action. These feel like attainable goals, and are coming at a time when we need them.

THE BILL MURRAY STORIES does a good job of conveying all of this heady rhetoric with some entertaining anecdotes, and not nearly enough scenes with that creepy Murray mask. It is a comforting documentary that offers the reader some introspection into their own world, through the Rorschach rambunctiousness of our cinematic eternal child.