In the interest of full disclosure, I should mention that I know some of the folks who worked on GAGS both in front of and behind the camera. I had been looking forward to it for some time, ever since the initial Gags “sightings” in Green Bay, WI were revealed as a sort of viral launch for the film. It was exciting that the finished product was getting a World Premiere screening at Cinepocalypse, both because a number of the people who worked on the film would be able to attend and because it was a big platform for such a relatively small production to make its debut. While star Lauren Ashley Carter couldn’t make it, she did send along a video introduction to the film which was a cool gesture and an illustration of how much this little movie meant to everyone who worked some long, cold Wisconsin nights to make it happen. The finished product is an unexpected treat, one of only a handful of “found footage”-style horror comedies out there. Happily, it works like gangbusters. 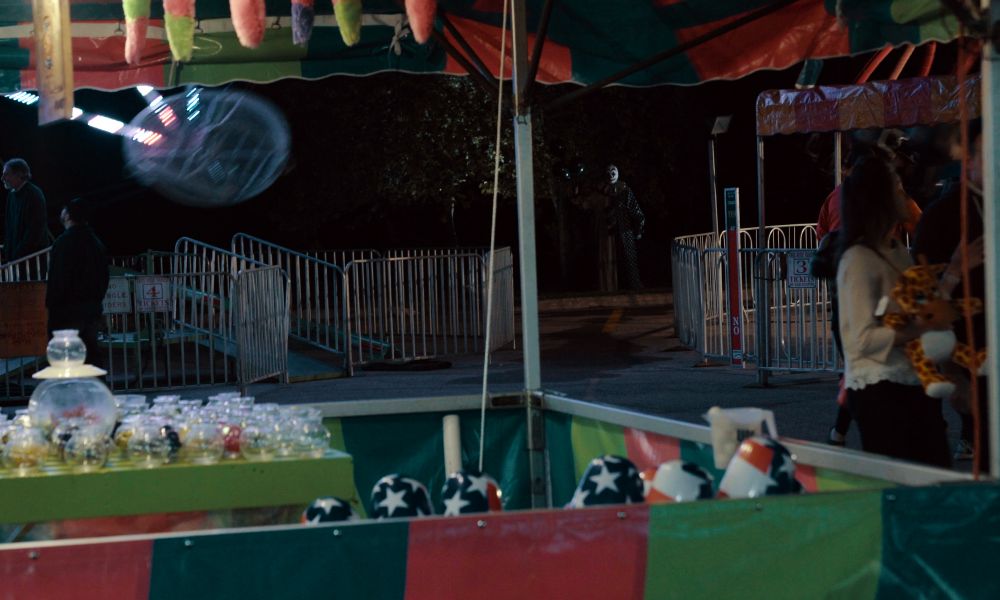 It’s been eight days since the first appearance of Gags, the clown who appears in Green Bay in the middle of the night with a clutch of black balloons in one hand. Local TV news reporter Heather Duprey (Lauren Ashley Carter) is unhappily tasked with “Gags Watch,” roaming around the city with cameraman Dale Russell (Wyatt Kuether) looking for people to interview or other developments in the story. If anything, there are too many of the latter: in the midst of all this panic, people are seeing clowns everywhere. A group of teenagers use a clown costume to startle their friends at a house party until it gets busted, and then they set out to do the same to random passersby around town. Right-wing Internet celebrity Charles Wright (Aaron Christensen) decides to take matters into his own hands by tracking down Gags and demanding–in person, at gunpoint, and live on Facebook–that the clown stop terrorizing the good people of Green Bay. Meanwhile, the cops have their hands full with reports of clown activity all over town, but patrol car partners Chrissy Renard (Tracy Perez) and Jake Gruber (Evan Gamble) seem to be on the trail of the real thing.

GAGS plays out as a sort of “found footage” anthology a la TRICK ‘R TREAT, following four main threads over the course of the night until they come together as Gags’s final plan is revealed. The most consistently entertaining of these is the one following Carter and Kuether as the harried newscaster and her laid-back cameraman, the two actors playing off each other brilliantly with convincing chemistry. Their natural interplay provides most of the movie’s biggest laughs, including a running gag where they keep bumping into an reporter and cameraman from a rival TV station. Aaron Christensen is perfectly cast as a gun-toting NRA/MRA blowhard, although if anything his character is a little too accurately portrayed; this kind of dude is running the country now, and he was probably easier to laugh off as a self-evident punchline back when GAGS was shot before the 2016 election. Until the groups come together for the finale, the police played by Perez and Gamble encounter the creepiest stuff in the film, and the connection between Perez’s Renard and one of the pranking teens helps give both of their characters a little more emotional depth. This helps the teenagers more than the cops, as their storyline is the weakest of the four, if still the source of some solid comic bits. 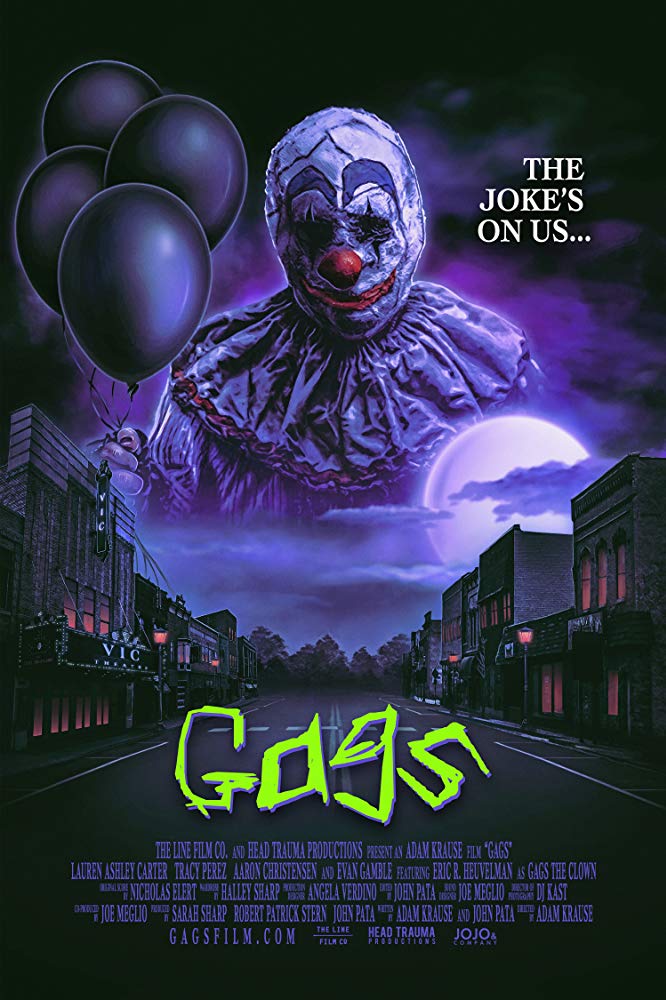 GAGS is one of the few examples of the “found footage” style being used where it doesn’t feel like a gimmick to cover up a low budget. It also doesn’t feel like it would work better as the same story/stories done in a traditional narrative. Instead of being presented as a compilation of prepared footage, the approach is a sort of omniscient third-person that peers through security cameras, police body cams, TV news cameras, smart phones, and whatever else has an eye on the proceedings. Most of the time this works very well, although there are a few brief tangents that ultimately feel extraneous. Director/co-writer Adam Krause and editor/co-writer John Pata keep the pace brisk throughout the film’s running time, with a steady stream of jokes and creepy set pieces. The finale really kicks the proceedings up a notch, and the final shot provides a perfect punch line to the whole film. GAGS is funny, wild, and a great, inventive example of how to make the “found footage” style practical and effective.