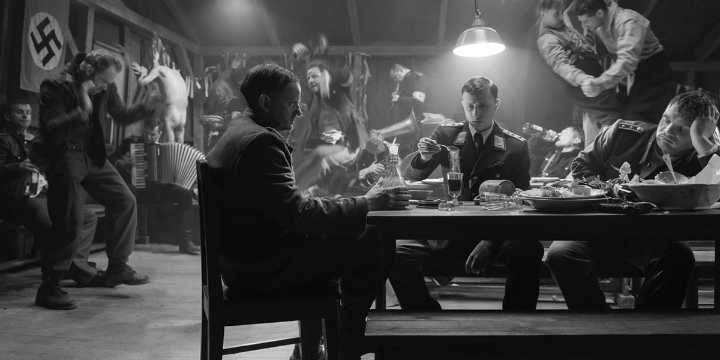 Willi Herold (Max Hubacher) is on the run, a deserter from the German army in the final days of WWII. He happens upon an abandoned car that has a captain’s uniform, and puts it on as a goof when he’s found by a lost German soldier who assumes he is a real captain. With someone under his immediate command, Willi decides to pose as a high-ranking officer on a special mission for the Führer himself. As he and his growing entourage of lost soldiers bounce around the desolate countryside and prison camps, Willi grows into the part with frightening aplomb. THE CAPTAIN is a fascinating, horrific tale based on a true story that is enhanced with a streak of utterly bleak, pitch-black humor. It’s gorgeously shot in stark black & white, with a sharp screenplay and a phenomenal lead performance by Max Hubacher. THE CAPTAIN won the award for Best Film at Cinepocalypse this year, and it certainly deserves the honor–this is one of the best films of the year so far, regardless of genre. 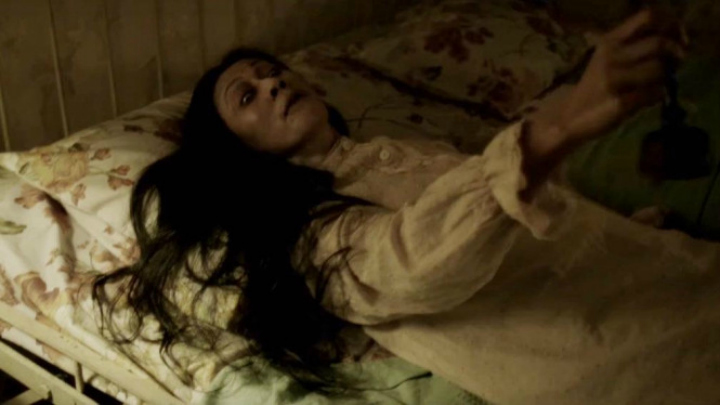 After their mother dies, a house full of siblings start to encounter supernatural occurrences while their father is away taking care of family business in the wake of his wife’s death. The kids range in age from maybe 5 or 6 to at least late teens, but the ghost that plagues the family seems most interested in the youngest. When eldest daughter Rini (Tara Basro) tries to figure out why they’re being haunted, she stumbles upon a demonic secret from her parents’ past. SATAN’S SLAVES is a relatively straightforward haunted house movie, but it’s positively dripping with atmosphere thanks to some beautiful cinematography and effective sound design. Like Paco Plaza’s recent exorcism film VERONICA, SATAN’S SLAVES relies on a slate of fantastic performances by an ensemble of child actors who absolutely sell the scares and the sibling interactions. It’s just some good, creepy fun–keep an eye out for this one, hopefully coming to the States soon.

Billy Moore (Joe Cole) is a young Englishman living in Thailand and trying to make it as a boxer, but after he’s arrested for drugs, he finds himself on a rapid downward spiral in a Thai prison. After hitting rock bottom and then boring down deeper still, Billy rediscovers his passion for boxing and joins his prison’s team. But with the enemies he’s made and the debts he owes, it may be too late for him to dig himself out of despair before his meager luck runs out. Based on the memoir of the same name by Moore, A PRAYER BEFORE DAWN is a harrowing, uncompromising prison drama with an excellent lead performance by Joe Cole. There’s some well-choreographed and nicely shot Muay Thai boxing sequences in the film, but this is hardly a typical sports or martial arts movie. The focus here is squarely on Moore’s descent and the things that kept him alive despite a seemingly hopeless situation. A24 will be releasing this in the States at some point, and it’s an experience not to be missed on the big screen.

It’s a typical boring summer vacation in small-town America, but for Davey Armstrong (Graham Vachere) there’s hope for an adventure. Unfortunately, that hope is the revelation that a serial killer preying on teenage boys is on the prowl somewhere in Davey’s town. He enlists the help of his childhood friends to investigate the man Davey believes is the killer: Wayne Mackey (Rich Sommer), a well-regarded member of the community and also a cop. As Davey’s schemes to investigate Mackey become progressively more dangerous, his former babysitter and current crush Nikki (Tiera Skovbye) begins to confide in him about her parents’ divorce. It’s a lot to deal with, and it only gets worse when Davey attracts the attention of the killer for real. SUMMER of ’84 is the second feature directed by Canadian filmmakers RKSS (François Simard, Anouk Whissell, and Yoann-Karl Whissell) after their cult hit TURBO KID. Like their first film, this one is packed with 1980s signifiers; unlike that film, this is much more “down to Earth” and while it’s frequently very funny the tone is very dark. More than just about any other recent 80s nostalgia films, SUMMER OF ’84 feels like it could have been made in the era it mimics so deftly. Think an Amblin production directed by Sean Cunningham: a loose, fun teen coming-of-age story that gets t-boned by a brutal slasher. 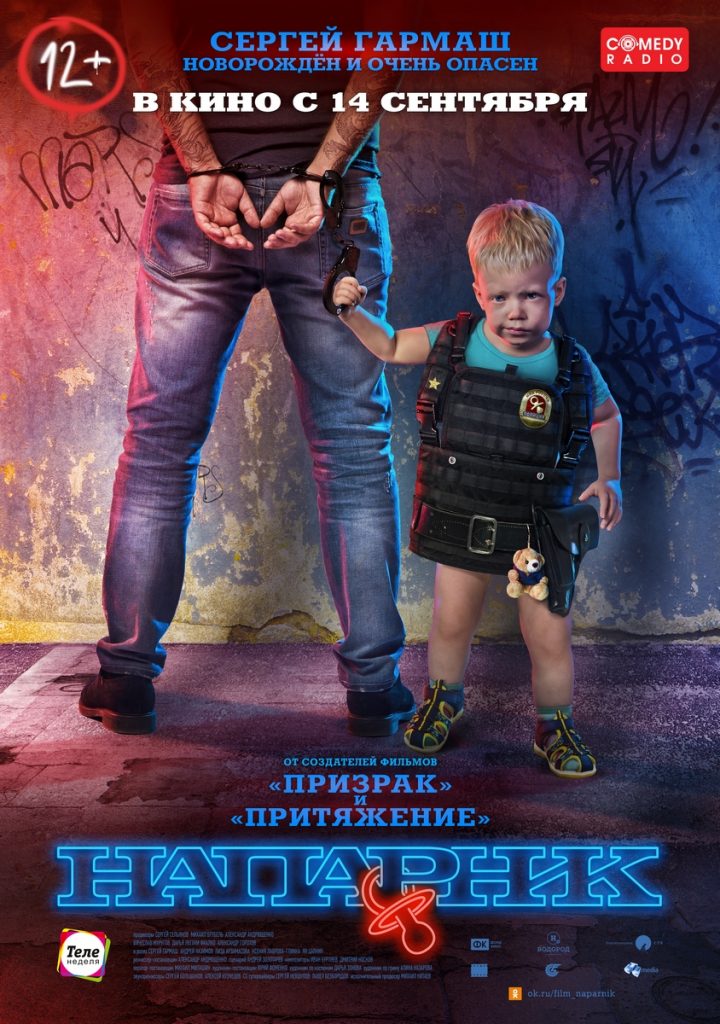 Following an elaborate undercover sting gone wrong, a tough-as-nails cop finds himself in the body of the newborn baby of Katya (Elizaveta Arzamasova) and Oleg (Andrey Nazimov), the strait-laced environmental cop whose interference botched the operation. When the baby turns one year old, he can suddenly speak in the voice of the grizzled cop and after the initial shock wears off he convinces Oleg to help him finish the job. But a fortune teller also gives him the key to get his body back if he can figure out what her riddle means. Will they bring down the crime syndicate before nap time? PARTNER is a weirdly restrained take on a premise that could have been totally outrageous, but it’s got loads of goofy charm. The baby is mostly CG, which is legitimately disturbing, but the way the situation is played totally straight works in the film’s favor. There are some fun set pieces here, but nothing that would score it more than a PG from the MPAA. It’s deeply silly stuff, but at least is aware of it, and it was a great pick for a late-night festival screening. God only knows if this will ever be released in the States, but if it plays a festival near you it may make for a nice breather between more challenging screenings.