I’ve been excited to see CLOWNTOWN ever since the trailer was posted on YouTube back in May. If you follow my reviews, you will know that I love any horror movies with clowns in them. In the past year we have had some stellar entries into the sub-genre. The Eli Roth produced CLOWN was amazing! I also can’t say enough good things about director Billy Pon’s debut movie, CIRCUS OF THE DEAD. CLOWNTOWN is a fun hack-and slash that will hit select theaters September 30th, and will be available on DVD and video on demand October 4th!
I’m all for a nudge and a wink to your audience, an homage can be great, but CLOWNTOWN sets up its story with a sequence that’s almost a rip-off of John Carpenter’s classic HALLOWEEN. There is a babysitter, a kid in a clown costume, and a murder. It’s to the point where even the family’s last name is Strode. Come on, I get it, but a little originality would be nice. I do have to say though, all the vintage clown decor in the house makes me happy. Reminds me of my own home! A lot of modern horror films claim to have a 1980s throw-back feel to them — but CLOWNTOWN is the real deal.
Fast-forward a few years, and we meet up with a group of pretty nondescript good-looking young people on their way to a country music concert. I hate them already. Bring on the fucking clowns, and murder these silly city folk! Brad (Brian Nigel), Sarah (Lauren Compton), Mike (Andrew Stone), and Jill (Katie Keene) aren’t bad people — it’s just that there is absolutely no character development. I mean, I would have almost preferred them being the standard horror-movie cliche tropes. Instead they are just boring, and I don’t care about them. Like all dumb city folk in horror movies, they ask for directions from the locals. Stupid move. If you’ve ever watched any horror movie ever, you know hillbillies always want to kill you…trust your mother fucking GPS, and that’s it.
Of course they take the short cut that isn’t on the map, and get themselves all turned-around backwards lost. Next thing you know, they end up in an abandoned town. The town reminds me of a combination of the Springfield seen in FREDDY’S DEAD: THE FINAL NIGHTMARE and LEATHERFACE: TEXAS CHAINSAW MASSACRE III. It’s stark, ominous, but with a sense of campiness. Things start getting a little more interesting now that they are lost. CLOWNTOWN turns into a weird mix of CHILDREN OF THE CORN and the infamous CLOWNHOUSE. What better time to smoke some weed. More idiocy! Don’t you know the rules? You just did drugs, so now your dumbasses are going to have to die.
Speaking of horror movie devices that are overused… the kids’ car won’t start, and they aren’t getting any phone reception. Argh, really? Finally the clowns are introduced! They all kind of look like store-brand knock-offs of the clowns from Rob Zombie’s 31, crossed with classic characters made famous by Lon Chaney in films like LONDON AFTER MIDNIGHT and LAUGH CLOWN LAUGH, the Joker from all the BATMAN movies, and something you’d see in the promo reel for AMERICAN HORROR STORY: FREAK SHOW. For me these are a definite plus! I love how maniacal and twisted the clowns are. My only complaint is that I wish that they had more speaking parts. I like my killers with personality! Are the clowns supposed to be freakin’ mimes? Most of them don’t talk at all.
For the remainder of the movie, our out-of-towners are running from one nondescript location to the next. This brought to mind how tedious LAID TO REST was. The only redeeming quality of this sequence was the group meeting up with a crazy old homeless guy named Frank (Greg Violand), who tries to help them escape. For my money, Frank is the best and most likable character in the movie.
I could have done without the music-video-style editing, but I will have to say that the colorful lighting and unique shots gave CLOWNTOWN an almost giallo feel. Despite huge plot holes and no character development, I really liked CLOWNTOWN. If you are like me and enjoy any horror movie with clowns in it, then you should check out CLOWNTOWN. 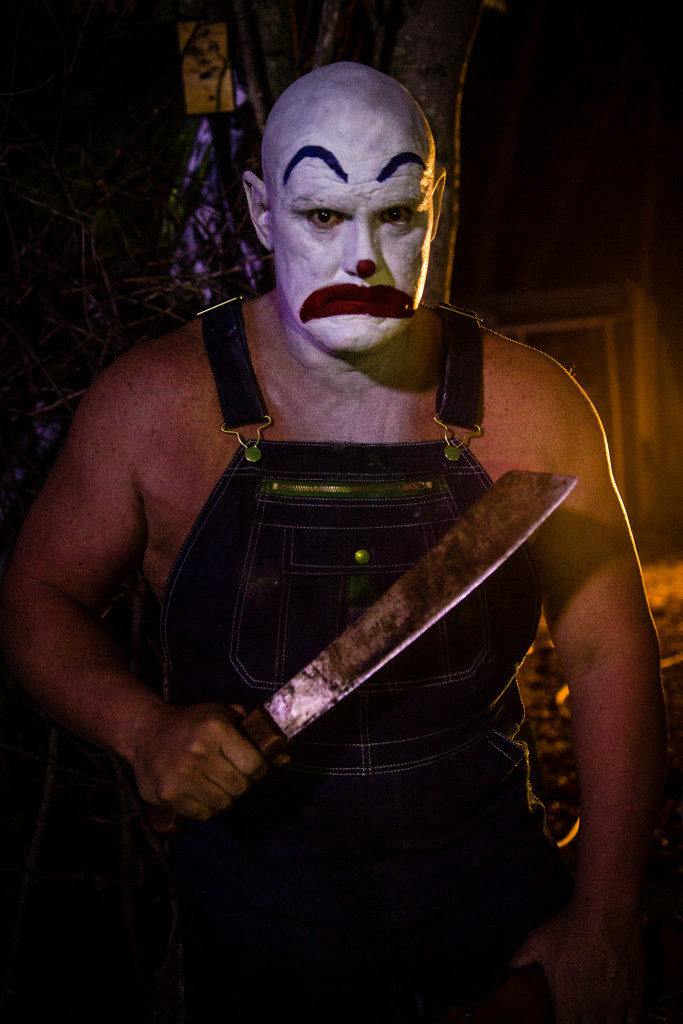