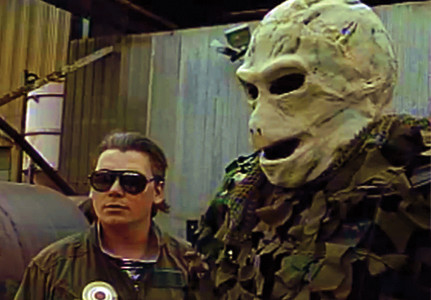 PHOBE: THE XENOPHOBIC EXPERIMENTS looks like the sort of oddity you would run across on a cable access channel back in the early ’90s. That is because it is that oddity. Shot in the early ’90s in and around the Niagara, Ontario area with an amateur cast that often doubled as the volunteer crew, it gained a cult reputation through repeated showings on the cable access channel where writer/director Erica Benedikty worked.

Featuring an ambitious story that draws on big-budget ’80s sci-fi films, Benedikty also included early computer animated sequences, miniatures work, and lots of “roman candle” pyrotechnics in her shot-on-VHS epic. On Tuesday, September 27th, Intervision Picture Corp. (a subdivision of Severin) is releasing a remastered version of the film for its home video premiere. Benedikty was kind enough to answer a few questions about her enigmatic film.

Daily Grindhouse: It seems like you had a whole mythology in mind for the world Dapp
comes from and how that world has been corrupted by greed that is barely touched on in the film. How long had you had PHOBE in mind when you went to your local cable station about making it?

Erica Benedikty: Wow, great question, one that I don’t often get. Yes, there is a whole world around Dapp and how he becomes the character he is that was never fully explored in the original PHOBE movie. It’s something that’s always existed in my mind and you get a little insight into this with the opening scene and when he takes off his glasses for the first time. PHOBE started back in the late 80’s as a small project for a college assignment. The movie was only about 5 mins. and was shot on Super 8mm. A few different versions developed from this including a type of space cop sci-fi movie. Then an opportunity arose so I developed the story into a horror/slasher for financing from an interested party. This was going to be shot on 16mm and would cost around 500k. Unfortunately or fortunately depending on how you look at it, the investor went in a different direction. Once I learned of the community channel in my area I approached them with the idea of making a movie, I wanted to do PHOBE, but I had to rewrite it to make it more family oriented to fit the channel. The current version of PHOBE is more of the vision I had over the Horror version, so things worked out better. Currently with newfound interest I’ve taken to writing a sequel to PHOBE which does get a little more into who Dapp is. It’s allowed me to focus more on the universe the PHOBE and Sgt. Dapp come from. Maybe this time I’ll make it for $350 dollars…

DG: The film seems inspired as much by ’80s-early ’90s knockoffs of movies like THE TERMINATOR and PREDATOR as the actual big-budget originals. The full title of the film, the opening credits, and the score, for example, reminded me a lot of Charles Band’s Full Moon productions. Did you watch a lot of those types of movies or is that just a happy coincidence?

EB: The movie does draw inspiration from THE TERMINATOR and PREDATOR for sure. Wonder if Arnold Schwarzenegger wants to be in the PHOBE sequel? The opening score was more of what I had to work with at the time. I had someone (Jeff) who wanted to do the music for the movie, so we went into the studio one day, recorded what he wrote and that became the title track. I felt it fit and was original, which was a bonus instead of using music from our sound library

DG: Was there ever a point when someone tried to discourage you or talk you out of making the film? Not many DIY productions in the early ’90s were attempting a story with this large of a scale.

EB: Not that I recall. I don’t think I thought of the movie in such a scale or it may have scared me off. In my mind I just wanted to make a Hollywood style movie so I did. It’s only now when I look back at what I managed to pull off that I realize the scale of the project.

DG: I love how the film feels like a time capsule from that early ’90s era. The fashions, hairstyles, and the ways the houses were decorated took me right back to that time. But there also seems to be something specific to the blue-collar feel of the area where you shot it. How important to you was it to capture that atmosphere accurately?

EB: Well in reality, most of the atmosphere came about from getting free locations to film in. The original ending of the movie took place in the parking garage, but when my Uncle said that the factory he works at would allow us to go and film the movie there, we quickly jumped at that opportunity. I was more focused on getting the scenes done and
hoping to create some kind of coherent atmosphere.

DG: I know PHOBE aired repeatedly as schedule filler on your station, but it clearly was connecting with an audience for it to gain the cult following that it has. Were you surprised that it had that kind of an impact? Were any of the cast members recognized when they went out in the Niagara area as a result of the film’s following?

EB: It did air a lot as filler, but at the station we would routinely get requests to play the movie. Of course, at the time my boss would say “Stop getting your mom to call in and request PHOBE“.  The cast were frequently recognized when they were out and about in Niagara. Even recently, Tina (who played Jennifer) was recognized when she was in
line at a grocery store, the movie hasn’t aired in 20 years!  I never really knew the scope of the following or impact the movie had in the area until now and I’m amazed and blown away by it. Since the movie came out long before social media it’s nice that it gained such a following.  It’s just an awesome thing to experience now.

EB: Well, my first honest reaction was “Am I being Punked”? I was amazed that people still knew about the movie, then once it sank in, I was supper pumped about the idea and super stoked on what they’ve done with the poster and behind the scenes documentary. It’s been an amazing experience thanks to Severin.  Prior to Severin there was nothing, as I didn’t really even think about doing much with the movie, it just wasn’t on my mind. It just sat on the shelf.

DG: Have you ever had the itch to make another film? Have you tried to get another production off the ground in the intervening years?

EB: Oh, the itch to make another movie never really goes away. I did make another movie after PHOBE called KOBBLESTONE – THE JOURNEY BEGINS. It’s about a group of kids who love playing D&D and are soon drawn into the fantasy world and become their characters. In order to get out, they must rescue a princess and defeat the evil wizard. I’m just in the process of getting that one on the computer to see what I could do with it. I made that one in 1995 right after PHOBE had aired. As I became full time at the channel, I seemed to have less and less hours to work on my own stuff. Now with the revival of PHOBE it’s inspired me to work on new ideas and scripts, as I mentioned I wrote a 123-page sequel already and I’ve just started a different script. I’m hoping that I may trying working on another project soon as I’m having a lot of fun just writing scripts in my spare time. Who knows, maybe soon we will see PHOBE II in theaters.