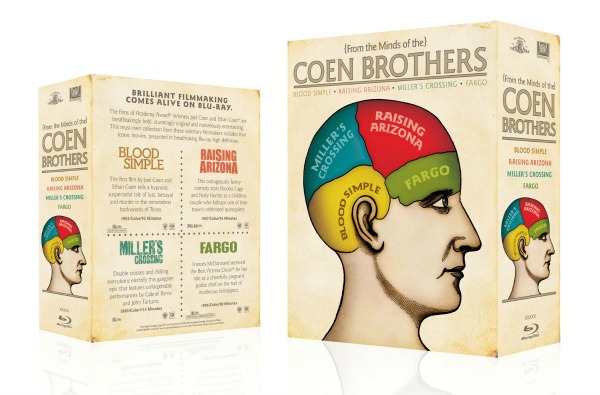 Blood Simple Blu-ray
From the celebrated filmmaking team of Joel Coen and Ethan Coen (Fargo, Raising Arizona), comes this visually stunning tale of a double-cross—and murder—in a small town. When the owner of a backwoods bar hires a man to kill his cheating wife and her boyfriend, he opens a door into the criminal world that he’ll never be able to shut. Blood Simple hurtles forward with the speed and intensity of a fired bullet…and delivers as devastating an impact as has ever been felt from a noir film!

Fargo Blu-ray
Nominated for seven Oscars® and winner of two, this darkly amusing thriller combines a first-rate cast, “a dazzling mix of mirth and malice” (Rolling Stone) and a bizarre kidnapping plot that unravels the Midwest like never before. Starring Frances McDormand, William H. Macy and Steve Buscemi, Fargo is a brilliant tour de force from the creators of Raising Arizona and O Brother, Where Art Thou?

Leo (Albert Finney), a likeable Irish gangster boss, rules an Eastern city along with Tom (Gabriel Byrne), his trusted lieutenant and counselor. But just as their authority is challenged by an Italian underboss (Jon Polito) and his ruthless henchman (J.E. Freeman), Leo and Tom also fall for the same woman (Marcia Gay Harden). Tom, caught in the jaws of a gangland power struggle, walks a deadly tightrope as he tries to control and manipulate its violent outcome.

Once he decides to give up crime, a small-time robber (Cage) proposes to a pretty cop (Hunter). But when the newlyweds learn they can’t conceive a baby, they decide to steal one from a couple who seem to have one to spare – since they just had quintuplets! With its outrageous plot, fast-paced action and even some wild pyrotechnics, Raising Arizona will forever have a place in the hearts of lovers – and film lovers – everywhere.