HORROR NOIRE: A HISTORY OF BLACK HORROR premieres on January 7. It’s Shudder’s first original documentary, and it’s an ambitious maiden voyage. Based on Dr. Robin R. Means Coleman’s Horror Noire: Blacks in American Horror Films from the 1890s to Present, Coleman also serves as an executive producer and features heavily in the documentary. Her delivery is that of the best professors: passionate, knowledgeable but clear and straightforward with a sense of humor, and it sets the tone for the many interviews that populate the documentary. 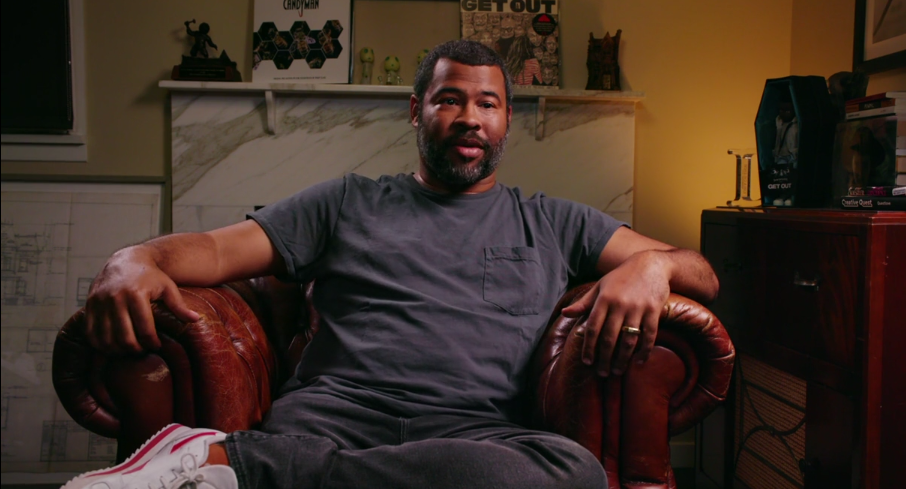 Since Coleman’s book was published in 2011, the documentary is able to dive into more recent horror films starring, helmed by, and written by black creatives. It should be no surprise that GET OUT is heavily featured, as the Oscar-winning film signaled a sea change that, as the documentary shows, has been swelling for decades. One of the most interesting and heartbreaking aspects of HORROR NOIRE is that, for as vibrant and influential as black voices have always been in film, for many viewers, that fact is a complete mystery. The film acknowledges both the heaven and hell that make up black genre film history for a fun but clear-eyed guide that goes decade by decade through horror history, with a few stops in neighboring genres. It focuses primarily on the African-American experience, save for a few modern British films like ATTACK THE BLOCK and THE GIRL WITH ALL THE GIFTS.

“THE BIRTH OF A NATION was a horror film, especially if you were a black person.” — Tananarive Due.

The documentary dives in immediately to the very early days of film, addressing but not lingering long on blackface and other racist tropes created and held aloft by white people for decades. They’re given context but not energy: Films like 1940’s SON OF INGAGI is much more fascinating and much less talked about. Directed by Richard C. Kahn and written by Spencer Williams, both African-American trailblazers in both screenwriting and directing, this film portrayed black women working in STEM fields and the black middle class. The oft-replayed “glory of the Ku Klux Klan” footage from THE BIRTH OF A NATION isn’t the only way to get the full brunt of the sickness of racism and how it infects art: The fact that the mundanity of showing educated people with well-paid scientific or law careers in 1940 is shocking based solely of the skin color of those characters says far more than it should ever have had to.

Sadly, we go from that rare high to the ridiculous lows in monster movies to near-total erasure during the atomic sci-fi horror movie age. If black actors were featured, they were most likely heavily accented servants. It’s also pointed out that a good deal of monsters and creatures who fell under “The Horrifying Other” had stereotypical black features worked into their makeup. It’s heartbreaking that one of the most fun and vibrant times in both the horror and sci-fi genre either glossed over or insulted a huge swath of the moviegoing public.

NIGHT OF THE LIVING DEAD was, unsurprisingly, monumental, not only for birthing and defining a horror subgenre, but also for its representation. Along with GET OUT, this is the most discussed film in the documentary. Ken Foree (DAWN OF THE DEAD) saw star Duane Jones in a similar way to the way he saw civil rights leaders at the time. “For the first time, we weren’t just the victims. We were the destroyers, the protectors for other people.” As it mentioned here, George Romero famously said the race of Ben was never set one way or the other: Jones was simply best for the role. Filmed during the Civil Rights Movement and delivered to distributors right during the time period Martin Luther King Jr. was assassinated, this, paired with footage of lynchings and the recent violence in Charlottesville, reminds us that it’s absolutely ignorant when anyone complains that they “don’t want politics in their horror.” Your bedfellow might be strange, but you’ve been bunking up since the beginning.

My favorite section might be the one devoted to blaxploitation, which is about as sharp as a double-edged sword can get. The movies were predominantly made by white men like Matt Cimber, and it was a grab bag on whether they’d break the mold to one degree or another or double down on the “pimp aesthetic.” I couldn’t help but think of how, inverse to Romero’s open role for NIGHT OF THE LIVING DEAD’s Ben, Isaac Hayes was cast as Truck Turner because, according to American International Pictures’s Larry Gordon and director Jonathan Kaplan, they couldn’t get a Lee Marvin or any other grizzled middle-aged white man type, so it became a blaxploitation feature.

Still, bright spots like BLACULA, directed by William Crain, inspired young black men and women to have fun with a classic character they could finally relate to and, more importantly, see filmmaking as the viable option it should have always been for them. One of the many treasures of HORROR NOIRE is hearing Crain lay out how he had to figure out on the film’s signature horror shots. 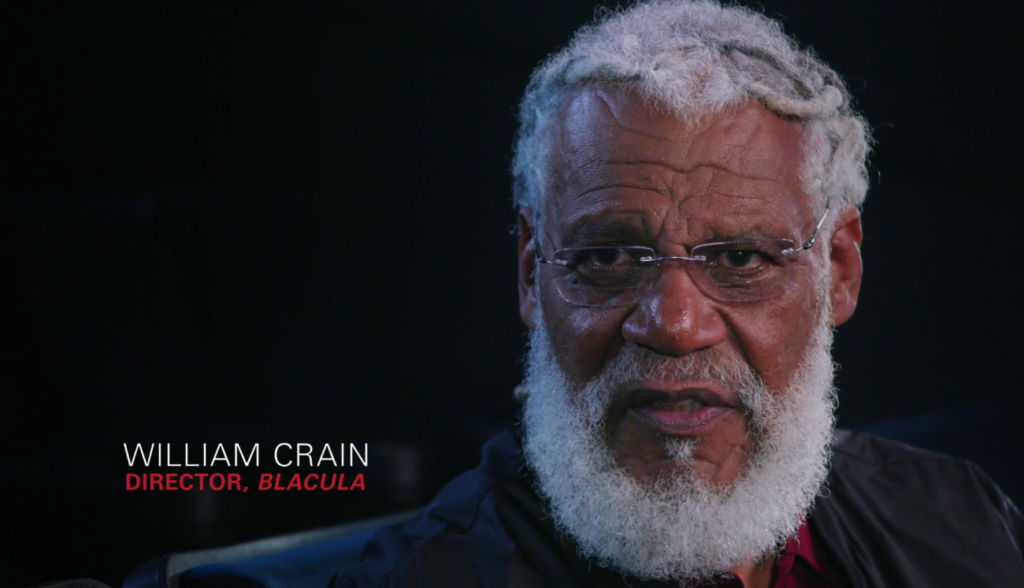 Black feminism and black female power on celluloid emerging with Pam Grier’s role in BLACULA is also showcased, and later on, a concentrated look at Kasi Lemmons’ stunning EVE’S BAYOU illustrates how overdue we are in going back and appreciating these films and how knowing that history should be even more fuel to empowering new black female voices in filmmaking.

HORROR NOIRE flies by, but it really picks up the pace when it hits the 1990s. From the most shameful portrayals (the “magical negro” and “sacrificial negro,” which aren’t as far in our collective rearview as we’d like to pretend they are) to an appreciation of Wes Craven’s earnest attempts to frequently feature black leads to the amazing ’90s renaissance of successful mainstream black filmmakers finding success with a social conscience outside of horror, no film shows the divisiveness in this era as much as CANDYMAN. Everyone chimes in, and it’s interesting to see how it hits actors versus filmmakers versus writers and how it shifts among the generational divides. The discussion is deep, and the talk of how something so artistic and groundbreaking can still be problematic is unmissable. 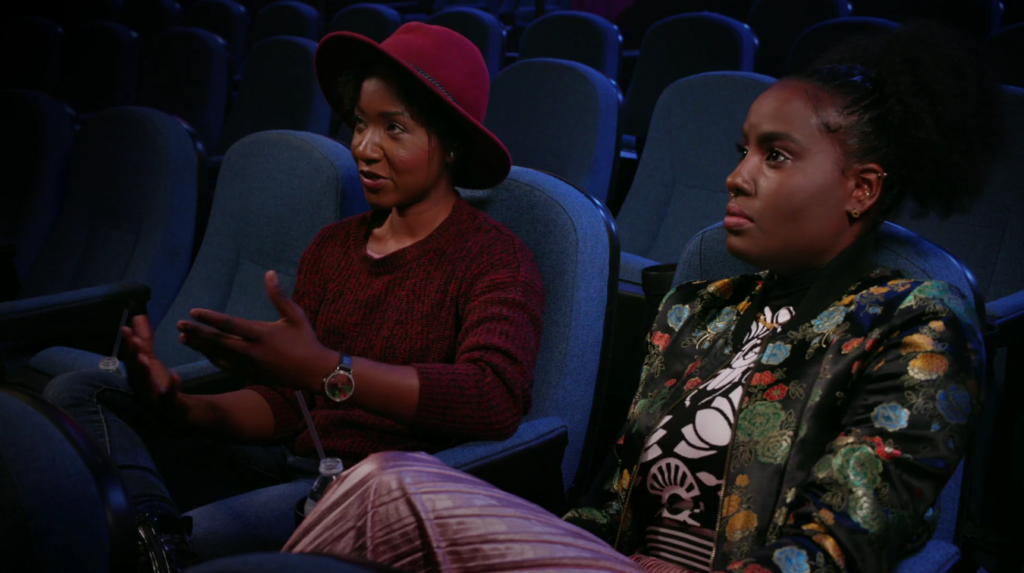 The set-up is classic interview-clip-interview-clip, but it feels fresh with its (mostly) movie theater setting, kinetic editing, complete avoidance of filler, and great use of music. Fitting in as many fascinating talking heads as possible doesn’t hurt, either. Author and educator Tananarive Due is a favorite, as is hearing from younger writers like Ashlee Blackwell. Director Ernest Dickerson is usually my favorite person to listen to in any room he’s in, and he’s frequently featured here as both a fan and a deeply experienced genre heavy who can speak on working with Spike Lee and creating his own visions, including TALES FROM THE CRYPT: DEMON KNIGHT and my personal favorite, BONES. It’s star-studded though, with Jordan Peele, Ken Foree, Tony Todd, Rachel True, Rusty Cundieff, Kelly Jo Minter, and many more. Whether they’re talking about their own films, what inspired them, or being shown clips of classics they aren’t familiar with to react to, it’s a treat.

This is director Xavier Burgin’s first full-length feature, and he avoids the stale nostalgia-drunkenness some horror documentaries find it easy to indulge in. The feeling that we’re hearing intelligent, creative people talk about issues they’ve dealt with their entire lives but have been too-rarely engaged about is both subtly delivered but profound. Writers and producers Ashlee Blackwell and Danielle Burrows use both Coleman’s and their own research and deftly balance it with academia, history, and the pure fun of being a horror devotee. This is the absolute sweet spot of entertaining, smart pop culture documentaries that teach instead of preach. 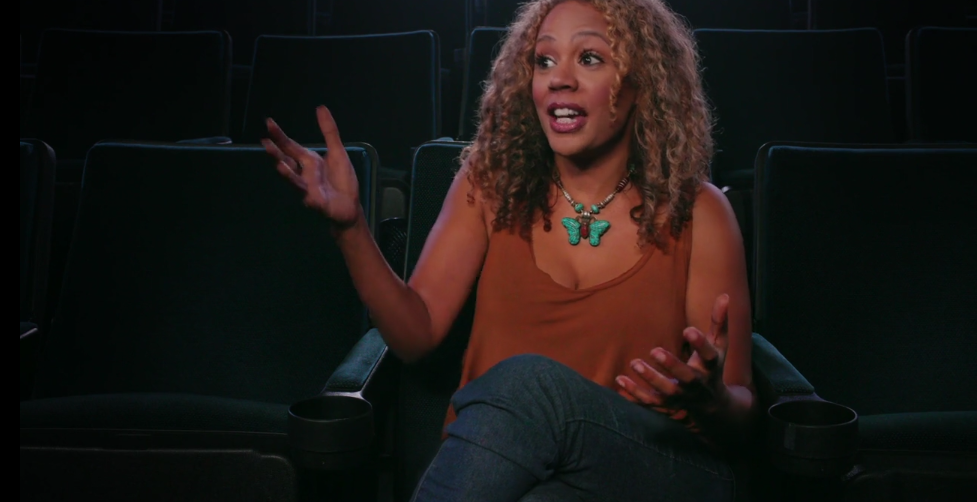 The subjects, be they academics, filmmakers, writers or actors, are charming, hilarious, and everyone knows their stuff. It’s a huge topic for a documentary that clocks in under ninety minutes, however, and my only real criticism is rooted in my own greed: This is about as flawless of a highly-curated primer as anyone could hope for, but there could easily be a fantastic docuseries here. I hope this leads to the book selling out a few more printings, an updated re-release, and a stampede towards the special features for the movies mentioned (and beyond), so people can dig into commentaries and featurettes that have been waiting for fans on the shelves this whole time.

Films should come to their audience purely, honestly, without bias; their intent — be it entertainment or a specific message — front and center. While the plot and film style can be wrapped in an experimental mystery, the fabric of its delivery should be clean. Hands dirtied by bigotry should never be allowed to interfere in artistic expression, under any circumstance.

As a movie asserts itself as an unconscious communal adventure, the audience is welcomed to surrender to this alternate, cinematic world. Sadly but not surprisingly, when it comes to the availability of this comfort, both the portrayal of black characters and the lack of appreciation for the talent behind the screen have denied a massive percentage of the population this simple joy.

Some of the most imaginative, thoughtful, and daring chances have been taken by black creators, and as decades tick by, those professionals who have turned profits, broken barriers, and garnered rave reviews are forced to prove themselves again and again in ways white filmmakers haven’t. Seeing those shameful threads tied together in a single documentary is as inspirational as it is unforgivable. HORROR NOIRE is pure fun for horror fans both experienced and new, but I have no doubt that it’s also going to become a go-to informational gateway. Everything is laid bare here, and I can’t recommend it highly enough.