Home  ⁄  The Wire  ⁄  [COMING SOON] Dead Or Alive, ROBOCOP 2 & ROBOCOP 3 Are Coming With You From SCREAM FACTORY

It is hard to imagine a major studio franchise more schizophrenic in nature than the ROBOCOP films. While the second and third entries in the series had the unenviable task of following up Paul Verhoeven’s damn near perfect first film, they have their own idiosyncratic elements and some diehard defenders. Those defenders should be happy to learn that ROBOCOP 2 and ROBOCOP 3 are being given deluxe Blu-ray releases from the ever-prolific folks at SCREAM FACTORY on March 21st, 2017.

While ROBOCOP 2 was missing the layered script of Edward Neumeier & Michael Miner and the deft satirical touch of Verhoeven behind the camera, it did gain a nasty, cynical script by Frank Miller & Walon Green that director Irvin Kershner turned into an over-the-top, grand guignol piece of gory mayhem. Returning stars Peter Weller and Nancy Allen lend some heart to the grisly proceedings and Tom Noonan makes for a memorably crazed villain. 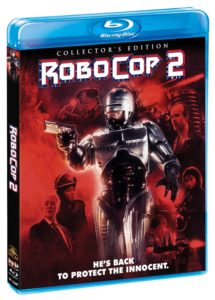 The ROBOCOP 2 Blu-ray comes loaded with extras, many of which are new and exclusive to this release:

New: 2K scan of the inter-positive

New: Audio Commentary with the makers of “RoboDoc: The Creation of RoboCop” documentary – Gary Smart, Chris Griffiths and Eastwood Allen

New: OCP Declassified – a collection of rare archival production and behind-the-scenes videos including interviews with director Irvin Kershner, actors Peter Weller, Dan O’Herlihy  and a look at the filming of some deleted scenes (46 minutes)

While the idea of Fred Dekker, director of NIGHT OF THE CREEPS and THE MONSTER SQUAD, taking on ROBOCOP 3 sounds like a terrific idea, the results were mixed. With Orion Pictures going through bankruptcy, Dekker lacked the large budget that Verhoeven and Kershner had been given and he was further hamstrung by the loss of Peter Weller in the titular role and the demands of a PG-13 rating—which is honestly a terrible idea for a ROBOCOP film. That said, there is something goofily entertaining about the film, making it worth checking out for completists. 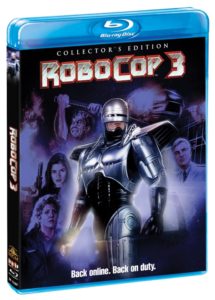 Even with its status as the limp end to the trilogy, the ROBOCOP 3 Blu-ray is still loaded with several new extras for fans:

New: Audio Commentary with the makers of “RoboDoc: The Creation of RoboCop” documentary – Gary Smart, Chris Griffiths and Eastwood Allen

Both discs are available for pre-order from SCREAM FACTORY.