Home  ⁄  The Wire  ⁄  [CONTEST] Do You Want A Copy Of Garagehouse Pictures’ TRAILER TRAUMA 3?

TRAILER TRAUMA 3: ‘80s HORROR-THON is the third entry in GARAGEHOUSE PICTURE’S genre trailer compilations. The collection features 250 of the scariest and goriest trailers that crept into theaters from during the Reagan era. All of the trailers have been transferred and digitally mastered in 4k and the sound remastered from the original optical tracks assuring you that this is the best some of these clips have looked since they were struck from the negative. The latest release from GARAGEHOUSE also features a very fun and interesting commentary with Chris Poggiali, Ted Geoghegan, Michael Gingold, Tim Ferrante, Grady Hendrix, Stephen Romano, Dan Buskirk, James (Doc Terror) Harris and Exhumed Films’ Dan Fraga, Harry Guerro and Jesse Nelson, as they provide personal anecdotes and fun facts about the terrifying previews of coming attractions. TRAILER TRAUMA 3 is a perfect Blu-ray to put on at your next murder party and we here at DAILY GRINDHOUSE are just giving it away, as well as a copy of TRAILER TRAUMA 2: DRIVE-IN MONSTERAMA thanks to DIABOLIK DVD and EXHUMED FILMS! 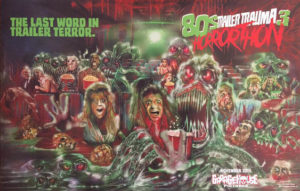 As we stated, there are over 250 trailers on TRAILER TRAUMA 3 but we want to know, how many of the films have you seen? DAILY GRINDHOUSE contributor JASON COFFMAN has compiled a Letterboxd list of the films featured on the collection. We need you to simply tweet at us how many you have seen (we’re going on the honor system here, people) along with a photo from your favorite trailer on the Blu-ray. Don’t forget to tag @diabolikdvd and @exhumedfilms and use the hashtag #TrailerTrauma3.

It’s just that simple. Who ever has seen the most films featured on TRAILER TRAUMA 3 will win a copy of the new Blu-ray. A lucky second place winner will receive TRAILER TRAUMA 2. Winners will be chosen next week.

Sound easy? It is. Don’t let us catch you in a lie though…you know what kind of movies we’re into.