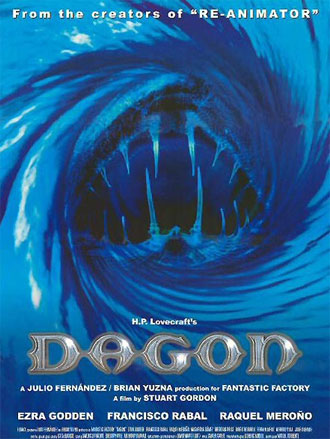 If you’ve been reading these reviews of mine for any time now (and you will, because you’re a smart individual) you’ll know by now I have a teeny, tiny penchant for tentacle rape. Nowhere in classic literature are you sure to get some good old forcible tentacle action as you will find in Lovecraft. Whilst it’s a far cry from 50 Shades Of Suck in terms of being explicit, it does however make no bones about Old Ones having a bit of a taste for our mortal women. Not that I can blame them. If I had come to earth and scoped out Zelda Fitzgerald, I’d have thought “You know, It’s been eons since I did anything kinky. Let’s try it with one of those sexy hairless apes”. At least I’d assume that’s what would be said. Either way, Lovecraft’s writings are rife with evidence that Cthullu liked to hit that. 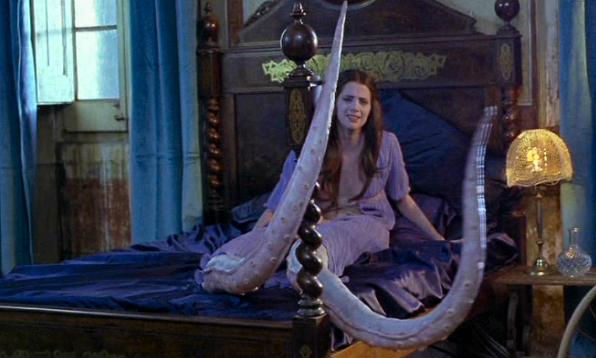 Which brings me to Dagon. I first saw this at the Cinemurte Film Festival in Vancouver. A friend of mine who had shown me RE-ANIMATOR had insisted that we go check out this film. I’m grateful that he did. This little gem with a screenplay by Denis Paoli was also directed by Stuart Gordon. So as we settled into the patently uncomfortable seats of the Pacific Cinemateque I knew I was in for a treat. All my debased desires would be catered to here.

It starts with a dream of a beautiful alluring mermaid. With a face full of sharp teeth. Normally this is what comes from shark-rapings, but our hero Paul (played by Ezra Godden) awakes on a boat in the Mediterranean with his girlfriend, Barbara. They are currently on holiday in Greece with their friends Howard and Vicki on Howard’s yacht. While it never clarifies if they are all just friends, cousins, or swingers, the mood is jovial until the ship hits some rocks. With Vicki suffering from a leg injuries, Paul and Babs decide to try the local fishing town to recruit help. 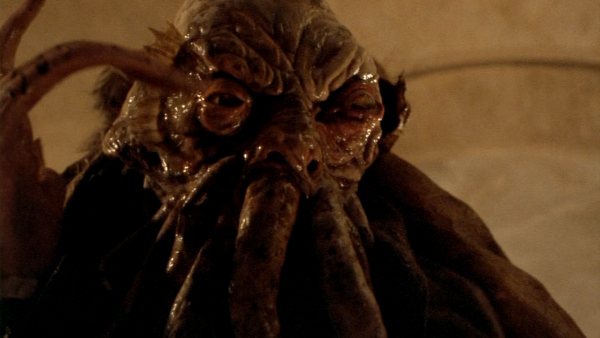 Help is all but denied as they are pursued by the locals. In a bizarre HALLOWEEN-like display of wearing a skin mask over their deformed faces, Paul and Babs play cat and mouse with the crowds (which are a secondary body hair away from using torches and pitchforks in their pursuit of the pair). It’s their shitty luck to be in a town that sold its collective soul to local water god Dagon in exchange for bountiful fishing. However, these exchanges are hardly ever fair and equitable. The people have started to morph into fish and squid-like creatures with the plan to join the sea. Oh yeah, Dagon also likes the mortal meat… and not in a culinary fashion. Both Babs and Vicki are fair game for cross god-breeding purposes it seems. We do meet one of Dagon’s hot bastard daughters, and find an eerie, yet vaguely arousing family connection that ties the whole thing together in one big, fishy bow.

With fun demigod incest, Scooby Doo-like chase scenes, and Gordon’s delight in subtle perversion, there’s lots here for Lovecraft fans to chew on. And the fanged mermaid is really attractive also, which may give you a craving for sushi….