The horror/thriller MONSTER PARTY follows three teenage thieves as they plan the ultimate heist in a fancy Malibu mansion. Little do they realize, the residents of the mansion are members of the social elite holding a rehab group for a deeply disturbing addiction. As they get sucked further into the deadly party, the thieves are just trying to escape with their lives. Starring, among others, Lance Reddick (JOHN WICK), Julian McMahon (Nip/Tuck), and Robin Tunney (THE CRAFT), MONSTER PARTY is a violent, scathing social commentary on class systems and addiction. Daily Grindhouse got the chance to catch up with writer/director Chris Von Hoffmann for an interview. 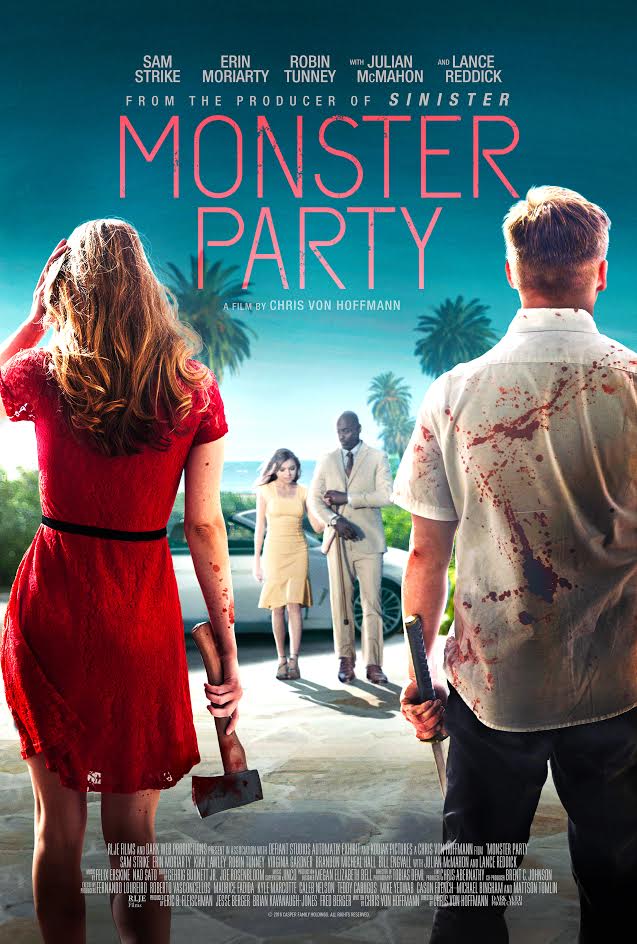 Daily Grindhouse: What inspired this idea of a rehab group?

Chris Von Hoffmann: During that time it was something personal, dealing with addiction. I was fascinated by the social statement it made and wanted to shake things up, to see the explosion of it all. To see the roles of the upper and middle class converge, those two worlds coming together.

Daily Grindhouse: What kind of class commentary, if any, were you trying to make in the film?

Chris Von Hoffmann: These are some topics that move through the story, like movements happening under a magnifying glass. It’s rare to see it addressed in a genre format. I wanted to make it extreme and vicious, to really have an impact on the audience. I wanted to really make a social commentary on it, and not sugar-coat it.

Daily Grindhouse: Why did you feel it was necessary to wait so long before the first violent scenes?

Chris Von Hoffmann: The first time I showed violence, it was a plot point. It was also very gratuitous and extreme. It doesn’t follow your standard slasher formula, with an opening kill. That makes it good for a twist. But once the violence starts, it never stops.

Daily Grindhouse: What other films may have been an influence on this one?

Chris Von Hoffmann: There is one key film, from beginning to end, and only cinephiles probably know this. It is the film SOCIETY from 1989, directed by Brian Yuzna, with actors who are well-known to this day. It’s an obscure gem, but with a tone that is more overt, like BLUE VELVET. It’s more of a mystery paranoia film. I first I even wanted to do a remake of it. It’s a similar kind of 1 percent film. Other inspirations were THE RULES OF ATTRACTION, AMERICAN PSYCHO, and FUNNY GAMES, though it takes itself less seriously.

Daily Grindhouse: What has the audience reception been to this film?

Chris Von Hoffmann: It’s been pretty strong. There was a distributor screening back in May for about 200 people. I was taken aback at how much everyone seemed to enjoy it. My mother even liked it. I thought maybe it was too out there, so I was surprised by the versatility. In almost everyone, it brought out a strong reaction.

Daily Grindhouse: What is the significance of the title MONSTER PARTY?

Chris Von Hoffmann: Well in a first draft they were all actually monsters, then I scaled down. By the end the word was just embracing what it means metaphorically and figuratively.

Daily Grindhouse: Why did you decide to have the characters who entered this situation be thieves?

Chris Von Hoffmann: The three key characters who are our main protagonists show that everyone has flaws. They’re not perfect, and they don’t do the best things. They’re shown robbing people’s houses. I liked to show flawed people up against more flawed people. That makes it more likable when they are mixing. They’re OK with life in the valley, and decide it is time to upgrade to a larger mansion, then find those people are more disturbed than they could possibly be.

Daily Grindhouse: How was this film different from other projects you’ve done?

Chris Von Hoffmann: It was the first movie I had truly written and directed, so it was the first time I was able to focus on directing. I spent a long time on the screenplay. It was something special and personal to me, this stuff about addiction and class. It was a much more personal project to me than anything I’d done.

RLJE Films will release the film nationally in theaters, VOD and Digital HD on Nov. 2, 2018.