We get it. It’s a bold move (to say the least) to come out with a remake of DAY OF THE DEAD, particularly so soon after the loss of George Romero. That’s on the one hand. On the other, it would seem sacrilegious to remake NIGHT OF THE LIVING DEAD or DAWN OF THE DEAD, and they already did that. At Daily Grindhouse we love George Romero better than plenty of our own family members, but we also believe every movie deserves a chance — see it, then decide. So we’re happy and proud to present Sharon Gissy’s interview with the talented director of DAY OF THE DEAD: BLOODLINE, Hèctor Hernández Vicens. 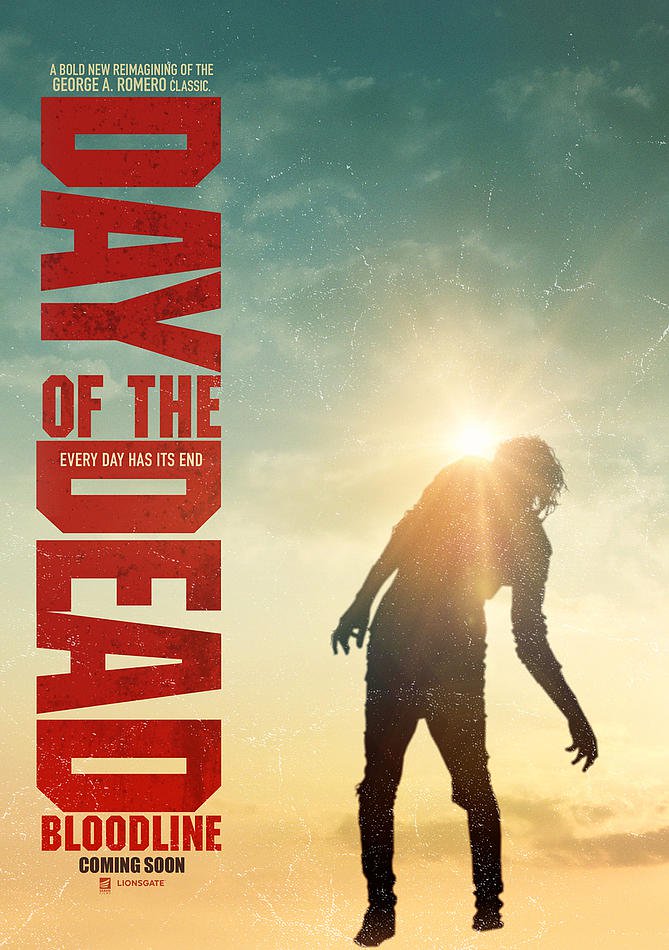 Daily Grindhouse: What first made you take an interest in this project?

Hèctor Hernández Vicens: Because I love the style of the zombies of George A. Romero. When I read the script, I found the script has a lot of elements that I loved, and allowed me to enjoy shooting the movie. As I enjoy Romero’s movies as a viewer.

Daily Grindhouse: How did you manage to create a DAY OF THE DEAD remake while still putting your own original stamp on it?

Hèctor Hernández Vicens: I didn’t create the script [by Mark Tonderai and Lars Jacobson, based on the characters created by George A. Romero]. I started to work from the script so my first objective was to create the style of the movie — the stage, the space, the colors, the atmosphere of the movie, the sadness in the characters and the sadness of the colors of the stage, the kind of suspense. Coming from Romero’s movie, I felt that the attention of the character is the most important thing in the movie.

Daily Grindhouse: What elements of the original film did you really want to retain?

Daily Grindhouse: What elements of the original film, if any, did you want to change?

Hèctor Hernández Vicens: First we changed the main zombie and the objective of the characters. In the original movie, the scientists want to domesticate the zombies. The main objective is to domesticate all the zombies of the world.  In our movie, the main character Zoe is investigating to create a cure for the zombie virus. The objective is different. In Romero’s movie, the smart  zombie is a regular zombie but domesticated. In our case, the smart zombie is a man, Max, that was bitten by a zombie but didn’t turn into a zombie completely. His body is rotten and he needs to kill and eat people. At the same time,  he doesn’t feel like a zombie. He hates people, he hates the world. He hates everything.  We have a deeper zombie. I am only talking about the main zombie, Max.

Daily Grindhouse: How did you maintain the balance between a horror and an action film?

Hèctor Hernández Vicens: I never thought it was an action film. The movie has action. Romero’s movie has action too. But nobody will say Romero’s movies are action movies. I thought the most important thing in this movie was to create the tension, the suspense, the fear, the horror, the emotion of the characters, the danger outside the bunker, than action scenes. I thought it was more important to show the tension of the situation than people jumping and running. We have action scenes but at the same time, we have horror scenes. This is a horror movie not an action movie.

Daily Grindhouse: What did you think of the script for the film?

Daily Grindhouse: How was this project different from others you’ve done in the past?

Hèctor Hernández Vicens: The script is very different from the script of my first film THE CORPSE OF ANNA FRITZ, which I wrote and directed myself. When I write and direct my own script, I am completely free to make my characters the way I want and make decisions on everything. In this case, the movie has a lot of things from my style. At the same time, I am adapting to what the producers want me to do since this is a producer’s movie.

Daily Grindhouse: What was the most challenging part of making this film?

Hèctor Hernández Vicens: Time. When you have a movie with lots of people and you have 4 weeks to shoot the movie the challenge is the time.

Daily Grindhouse: What was the most enjoyable part of making this film?

Hèctor Hernández Vicens: The actors.  When the actor is a normal person making a zombie and acting like a zombie. When you see the actors enjoying their characters and living the situation. When you are in the director’s chair and watching the zombies running towards you. It is the best thing of making a zombie movie.

Daily Grindhouse: What were some possible influences on you other than Romero’s film?

Saban Films will release the upcoming horror film DAY OF THE DEAD: BLOODLINE in Theaters, on VOD and Digital HD on January 5, 2018.