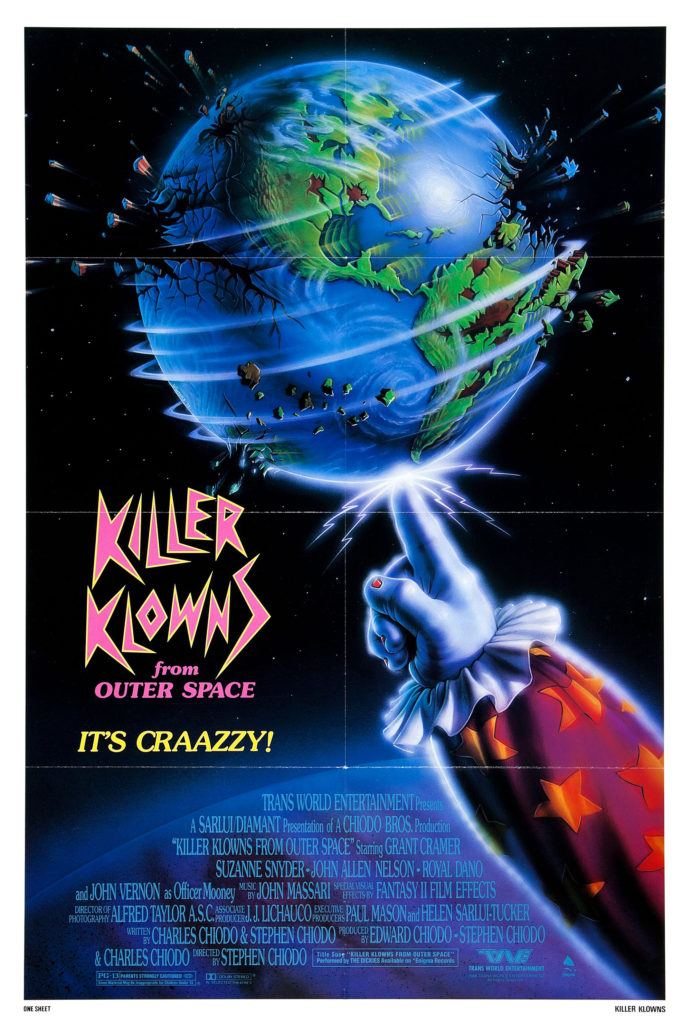 1988’s KILLER KLOWNS FROM OUTER SPACE is a great example of a true cult classic. The Chiodos Bros. Film about alien clowns harvesting humans in cotton candy not does comedy/horror like no other film does, but is a film that is impossible not to love. It’s a perfect combination of a fun story and an excellent soundtrack, including a theme song by punk rock band The Dickies. 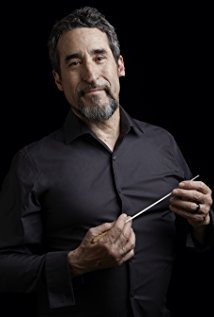 Daily Grindhouse: KILLER KLOWNS FROM OUTER SPACE has had such a wild fan base for years. What is it about the film that you think really resonated with fans?

John Massari: The imagination, innovation and bizarre creative spirit represented in the film has resonated with audiences for generations. Grandparents are passing this film down to their grand children! It is interesting that this film has become a sort of comfort food for people. I’ve seen tweets where people said as a remedy for a hard day, they were putting on KILLER KLOWNS FROM OUTER SPACE. 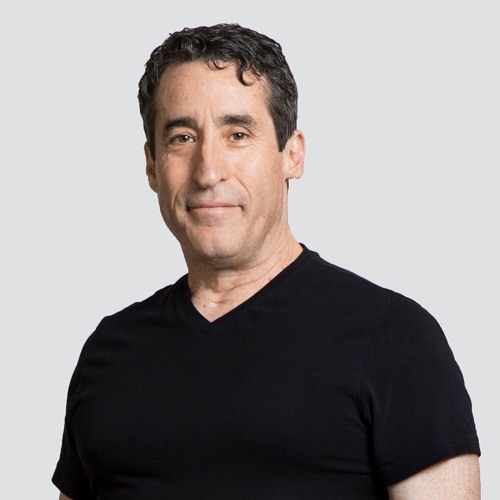 Daily Grindhouse: The music has always been a large part of what in my opinion, makes the movie so fun and enjoyable. When jumping into it, we’re there specific ideas you wanted to make sure got in there?

John Massari: I wanted to make sure that the music was serious. This way we create a contrast which plays against the bizarre nature of the film. The Chiodo Brothers were very specific. They admired such classic films as KING KONG, MIGHTY JOE YOUNG, and THE SEVENTH VOYAGE OF SINBAD. All of them had legit orchestral scores. However, there was a need for this “legit” music to be performed with unique colors of the synthesizers of the day, so we brought all of those elements together for this score. Of course, the punk rock riffs from ‘The Dickies’ also married perfectly with this film and the overall music aesthetic. 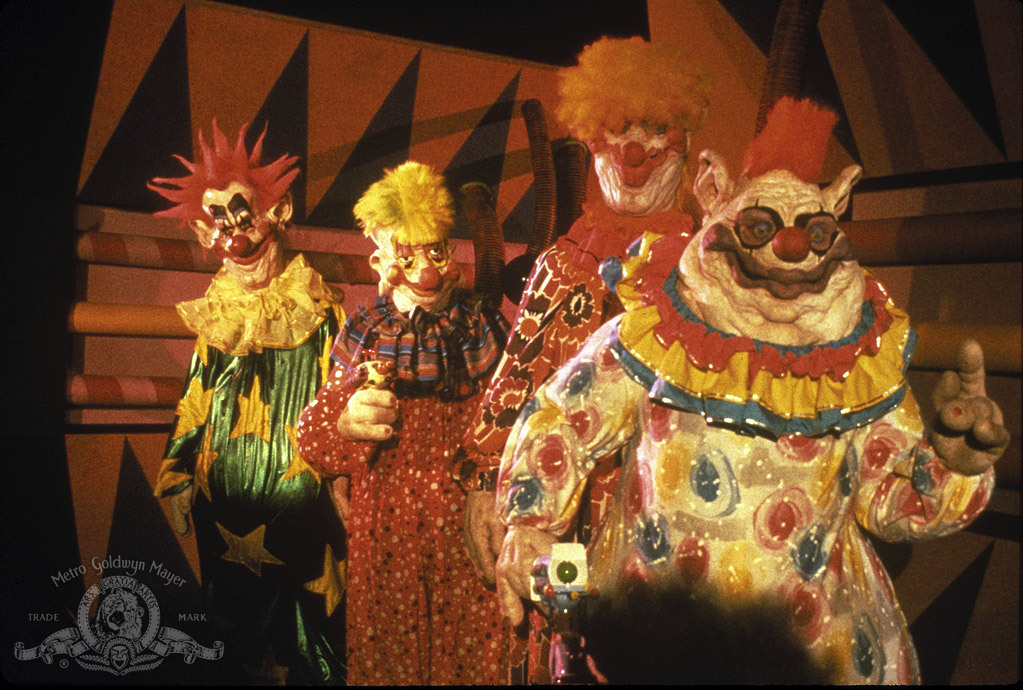 Daily Grindhouse: The idea that a cult classic horror film could have somewhat of a remixed soundtrack, a live performance and so on speaks volumes about how beloved it is. How does it feel to be a huge part of something like that?

John Massari: Honestly, it is exciting. With an orchestra score, the film has a whole different color. There is a dynamic and expression that is deep and unique. No one performance is the exactly the same and each orchestra has its own particular character. We are really thrilled to have been able to pull this all together to create this magical evening and experience. We’ll have original cast, the filmmakers, The Dickies and the Hollywood Chamber Orchestra all working to create a magical experience for fans. 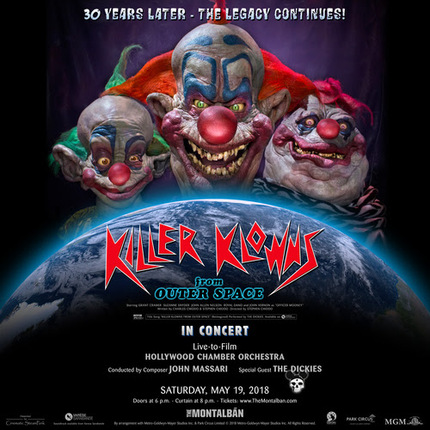 Daily Grindhouse: What can fans expect from the performance?

Oh yes — I have all kinds of ideas! Let’s hope that we get to bring them to life. In the meantime, we have a new KILLER KLOWNS FROM OUTER SPACE: REIMAGINED soundtrack coming on Varèse Sarabande this week (digital release May 18th and CDs will be available May 25th). It features my original synth music reimagined for orchestra and is performed by members of the Hollywood Chamber Orchestra, and a special guest Performance by Bear McCreary (THE WALKING DEAD, 10 CLOVERFIELD LANE, BATTLESTAR GALACTICA). It also features a new recording of the beloved theme song by The Dickies. It features an extra creepy intro followed by their signature pure punk energized sound. 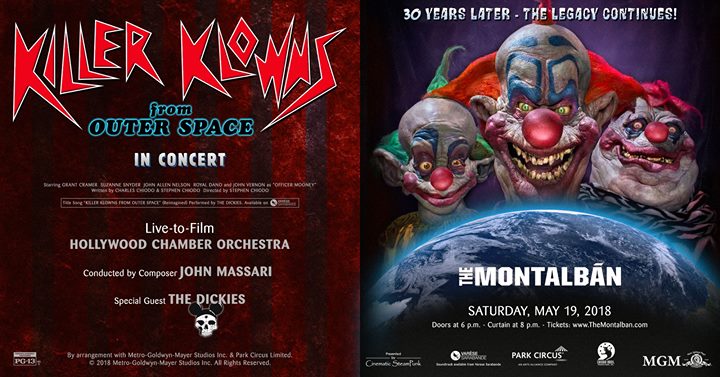 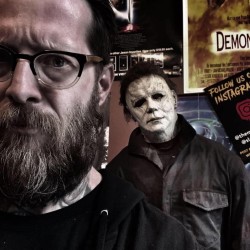 Jerry Smith
Filmmaker/Writer/Dad/Metalhead I love horror, my kids and my wife.