Kier-La Janisse is a supernova in the world of film criticism, presentation, and just overall obsession.

The Canadian native programs dynamic movie schedules all over the planet, oversees The Miskatonic Institute of Horror Studies, and is the founder, proprietor, and artistic director of Spectacular Optical publishing — a vital imprint whose output (so far) includes LOST GIRLS: THE FANTASMAGORICAL CINEMA OF JEAN ROLLIN; YULETIDE TERROR: CHRISTMAS HORROR ON FILM AND TELEVISION; and SATANIC PANIC: POP CULTURAL PARANOIA IN THE 1980s.

In 2012, Janisse authored one of the most astonishing cinema books and memoirs in a single, breathtaking volume by way of HOUSE OF PSYCHOTIC WOMEN: AN AUTOBIOGRAPHICAL OF FEMALE NEUROSIS IN HORROR AND EXPLOITATION FILMS. It is a work of huge, humbling, inspiring genius.

Now, after collaborating with other writers via Spectacular Optical, Janisse is returning to first-person authorship with COCKFIGHT: SILENCE, RITUAL, AND THE (DE)CONSTRUCTION OF MASCULINITY IN MONTE HELLMAN’S COCKFIGHTER. 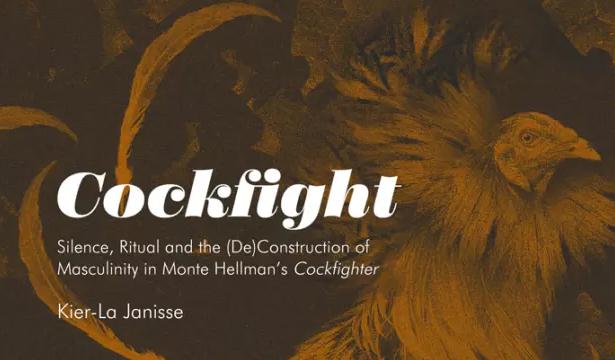 Delving deep into the controversial 1974 film COCKFIGHTER starring Warren Oates and also into the Charles Willeford novel upon which the movie is based, Janisse “explores the intersection of Southern Gothic, ritual masculinity and second-wave feminism with a combination of cultural criticism and production history, while also examining the controversial bloodsport that inspired it.”

At present, an Indiegogo campaign is afoot to finish financing COCKFIGHT in time for a scheduled early 2019 release. Anyone reading this website would be wise to jump in now and contribute — Kier-La Janisse is a giant among us, and COCKFIGHT is destined to be another landmark. Go here for more.

Kier-La took some time to talk to Daily Grindhouse about COCKFIGHT. Our conversation follows. 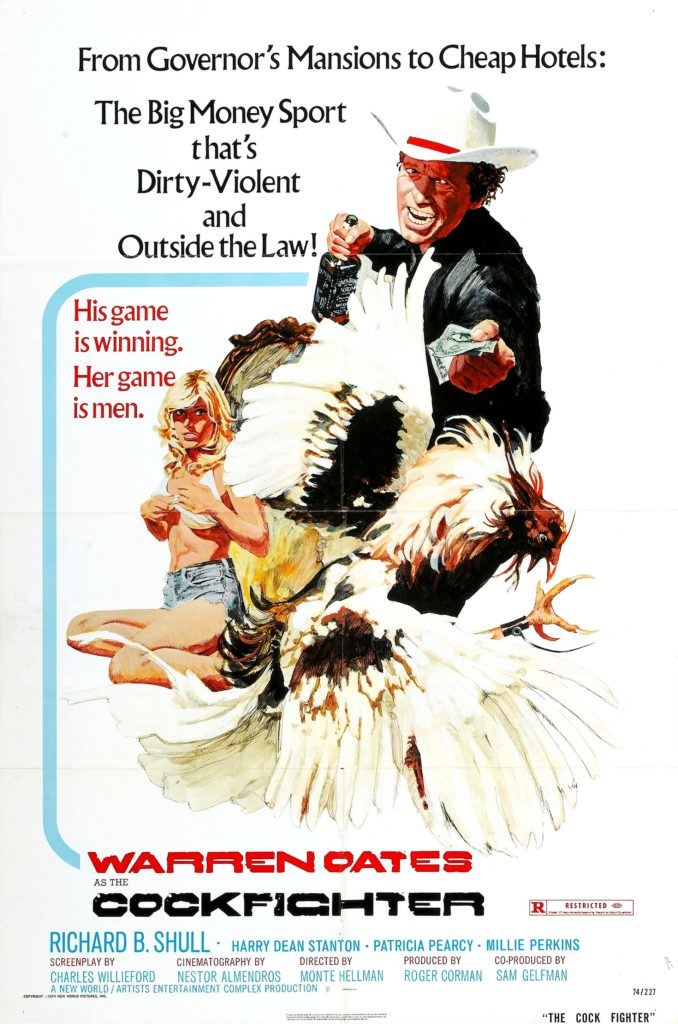 COCKFIGHTER? Why this movie? Why this book? Why now?

Kier-La Janisse: Well ‘why now’ is the easy part, because now is when I’m finally finishing it! But why — well, that’s part of what I hope to explain in more detail throughout the book. But the short version is, it’s one of my favorite films, one that resonates with me personally, but one that I don’t seem to be able to share with many people because of the subject matter.

While TWO-LANE BLACKTOP is a similar story of obsession and male competitiveness within a particular subculture, people find its backdrop of street racing much more palatable than cockfighting.

So I wanted to talk about what it is that I get out of the film, how it’s so rich and loaded a film to deep-dive into from a historical and philosophical perspective, how it’s the perfect confluence of so many amazing rogue talents, and how I see it as an important document of a maligned subculture that nurtures a lot of fascinating self-mythology. 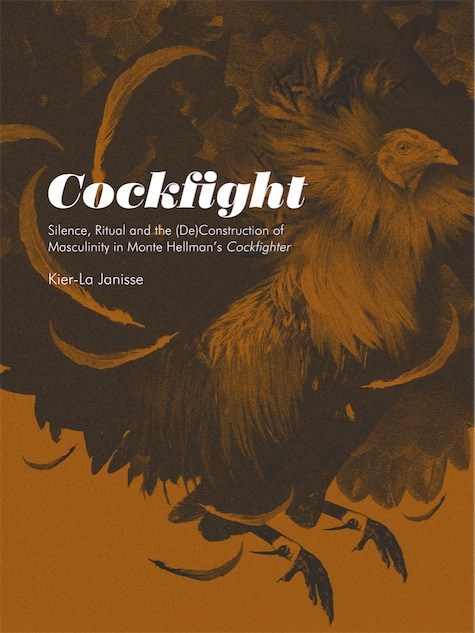 What will be the nature of the COCKFIGHT book — in terms of format, overall concepts, and how it might compare to HOUSE OF PSYCHOTIC WOMEN?

Then it goes into the Charles Willeford book the film is based on, Willeford’s background, his writing style, precedents for COCKFIGHTER in his other books et cetera, before transitioning into the genesis of the film and the beginning of production. 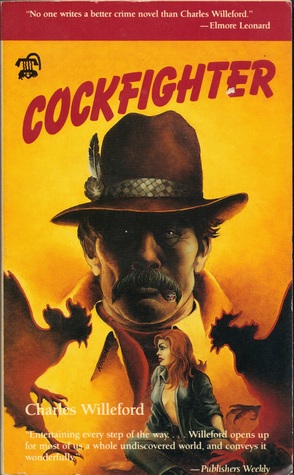 From there, it shifts to breaking down the film by themes – from literary foundations like American tramping literature and southern gothic to historical examinations of the sport’s religious and ritualistic significance, to the film’s emphasis on work ethics, the choreography in filming the fights, to class distinctions, gender relations and the inevitable phallic symbolism and more.

There’s also a fair bit of practical detail about cockfights work, just because as with any subculture the “rules” are always interesting to be privy to, at least to me. So it gets a bit nerdy. And then it goes back to the post-production of the film, its failed release, the attempts to save it through alternate marketing tactics, and finally the conclusion, which is where I ended up after this weird journey.

So it’ s not quite HOUSE OF PSYCHOTIC WOMEN, but it will have injections of the personal, because I realized as I was working on it that I really care more about this film than most of the people who worked on it. So I think my personal passion for it has to be in there for it to work. 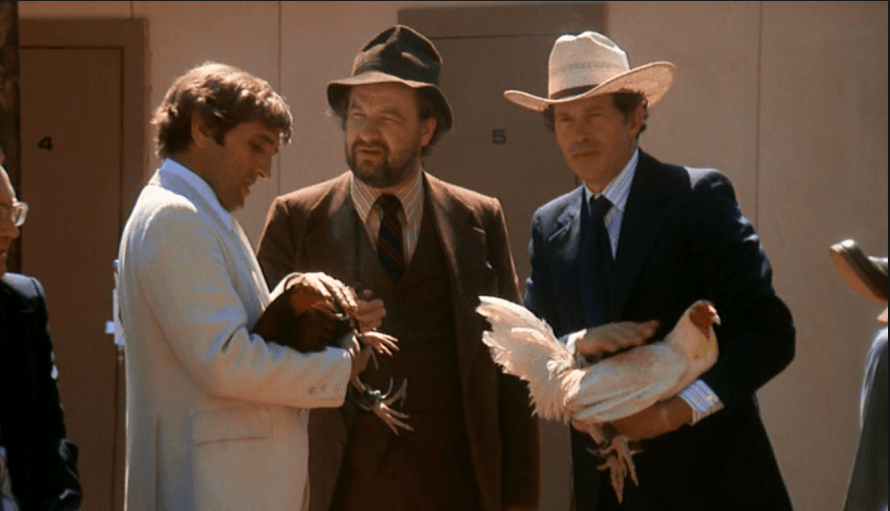 The very nature of COCKFIGHTER is going to invoke debates about animal cruelty. How do you address this aspect of the film?

Kier-La Janisse: The book takes a pretty neutral approach to the cockfighting itself. It documents it, presents its historical background and the justifications that have been used in perpetuating it over the centuries. I mean, I find it fascinating, even though it’s awful and grotesque. But I don’t think it’s a surprise to anyone that I’m drawn to a lot of things that are awful and grotesque.

Between overseeing Spectacular Optical, The Miskatonic Institute, programming films, and freelance writing, you maintain a superhuman schedule and produce work of extraordinary quality. How do you make it all happen?

Kier-La Janisse: Actually my work ethic —  and that of a lot of tireless colleagues around me — is a big part of why I like COCKFIGHTER so much. I really respect people who work their asses off and are constantly challenging themselves to be the best at what they do, especially if what they do is not something legitimized or rewarded by society at large.

For a long time, working in horror was like this; [the genre is] going through a phase of “acceptability” now, but horror professionals always feel they have to justify what they do to people who think we are all just sadists.

Being the best at something people don’t think is worthwhile is always a bit like the fool being king for a day. And the character of Frank Mansfield [played in COCKFIGHTER by Warren Oates] is a bit like that. King of the Fools. Anyway, that was a tangent.

People sometimes say my expectations are too high — that I expect too much from myself and from them, and that maybe I should not be such a perfectionist. But I fuck things up all the time!

I mean, I keep learning and trying to be better at what I do, but even with the quality of work I put out, I am never really happy with my own work. I always feel I could be doing more. And honestly I just put high expectations on the people I work with and care about because I know they’re worthy of it.

I think there are a lot of people who are much, much better at everything than I am, but they set a great example that inspires me, and I guess with my various projects I try to do that for others. I try to set the bar high and provide a professional platform for their writing, filmmaking, teaching, whatever, that they can be proud of.

Also, the most simple explanation is I have nothing else in my life except my work. I have no home, no car, no partner, no pet, I’m a total vagabond. So my work is all I have and everything gets poured into that. But of course that means my identity is 100% tied to my work, and so if I feel I am not productive enough, it can become a real crippling existential dilemma for me. I suppose that fuels me too. I only feel proud of myself when I am being super-productive.

We’ve heard rumblings about a GREASE 2 book coming from you. What’s the deal with that, Cool Rider?

Kier-La Janisse: Yes, that’s a commissioned book for Bear Manor, but I am a big fan and thought it would be a change of pace from my usual grim subject matter — ha-ha! I should be way further along than I am, but COCKFIGHT has taken precedence as I try to wrap that up. But I am hoping to shift gears to the GREASE 2 book later this summer, as I’m supposed to finish that at the end of this year.

What three other films would you be interested in exploring with a single book, and why?

Kier-La Janisse: Actually I never thought I would do a single-movie book, and now I’m writing two at once, so I don’t know that I’d even want to again. But I suppose after a break I might consider doing one about MESSIAH OF EVIL — I did actually pitch that to a publisher who wasn’t interested — or maybe something like DECODER. 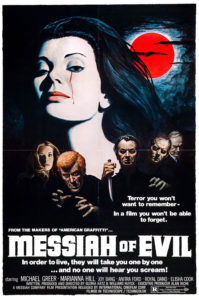 [Movies] where the film can be a jumping off point to talk about other kinds of art, interesting social scenes or subcultures. But I wonder how many people will actually buy a single-film monograph about a semi-obscure film. I guess I’ll find out with COCKFIGHT!

Kier-La Janisse: Aside from the GREASE 2 book, I am also editing and producing some cool featurettes for Severin Films, doing a bit of writing and editing for “a famous director” for one of his side projects (that I can’t talk about yet), doing more development on my proposed TV series of HOUSE OF PSYCHOTIC WOMEN with Rook Films, programming for Motel X and the Toronto True Crime Film Festival (I curated the symposium events happening this Saturday), planning a new LA branch of Miskatonic — more news on that coming in July — as well as several Miskatonic satellite events, and also this year I have two general life goals, which are to learn to drive so I can go to stunt driving school and to get the high score on my favorite pinball game, Gorgar. But, honestly, I suck at pinball, so this will take like a bazillion quarters.