DANGER DIVA (2018) is a dazzling, mind-reeling “lo-fi sci-fi” musical cyberpunk thriller from writer-director Robert McGinley. It’s his first feature since SHREDDER ORPHEUS (1990), a scrappy skate-punk cult favorite that acts as a bridge between VIDEODROME (1983) and THE MATRIX (1999).

Molly Sides, frontwoman of real-life Seattle band Thunderpussy, stars in DANGER DIVA as Devi Danger. She’s a rock singer with operatic pipes who accepts a bio-upgrade implant from tech mogul Stanley Arkoff (Tim Gouran) that escalates her talents and abilities to superhuman levels. Naturally, unintended consequences result and hidden motives come to light, all of which loop back to DANGER DIVA’s savvy and provocative tagline: “Give me some analog!” 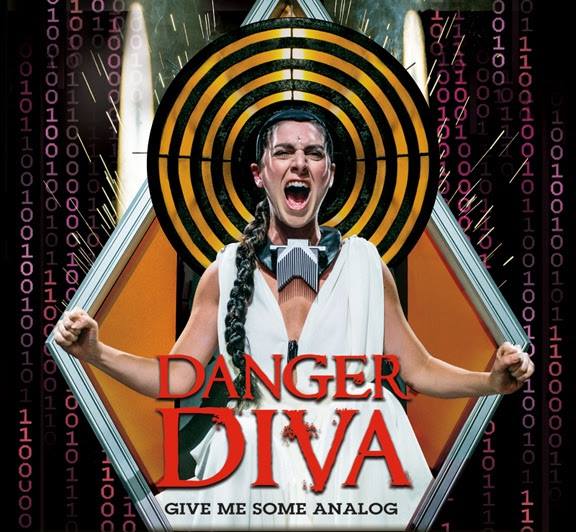 McGinley’s script is a powerhouse of classic cyberpunk that invokes BLADE RUNNER and William Gibson’s landmark novel NEUROMANCER and amps it up with serrated-edged rock-‘n’-roll. Working with a limited budget, McKinley pulls off quite a feat as a director, making DANGER DIVA electrically compelling to a point beyond any noticeable limitations. ‘Impressive’ is the word, all around.

Robert McGinley took some time to talk to Daily Grindhouse about DANGER DIVA, and we thank him. 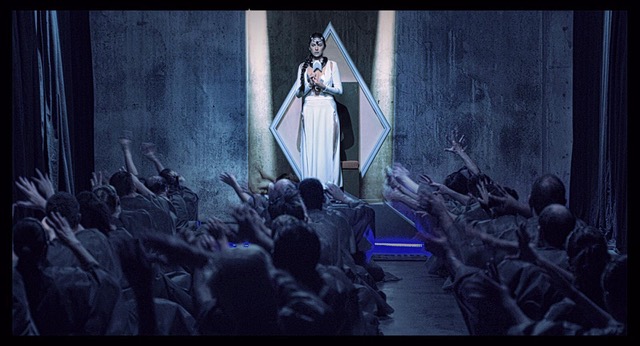 DAILY GRINDHOUSE: First things first, DANGER DIVA is rooted in some very bold concepts. How did the movie come to be?

ROBERT McGINLEY: Well, my first film, SHREDDER ORPHEUS, was about how human consciousness was being shaped by television. From there, technology changed so much and changed the world so much, and I got to thinking about chip implants and augmentation devices that that would great change our lives, perhaps more than anything else before.

When I was researching DANGER DIVA, I came across this while reading about DARPA [Defense Advance Research Projects Agency], which came out of Ronald Reagan’s “Star Wars” program in the ’80s. I read about how they were looking into augmenting programmers to be better at their jobs — to absorb data more quickly, and to act faster with computer chips that would augment their nervous systems, and make them better at shooting down nuclear missiles coming in from the Soviet Union.

At the time, all this was still on the horizon. But, since then, science and technology have advanced so much, and so fast. The focus now is on life extension, that we may be able to prolong our lives through a downloadable chip interface.

DAILY GRINDHOUSE: Aside from the tech elements, what else inspired DANGER DIVA?

ROBERT McGINLEY: My interests are pretty eclectic. I’m a student of mythology. First, I studied Greek mythology, which went into SHREDDER ORPHEUS. Then I studied Hindu mythology, and a lot of that is in DANGER DIVA. My research started with Kali, the Hindu goddess of death and rebirth, and then it became about Devi, the Hindu goddess of the divine and the giver of all things. That’s why the main character is named Devi.

In the past, I’ve been a producer of performance art, and Diamanda Galas was a big inspiration. She’s a singer and a composer and she uses vocals in such an astounding way, it’s transcendent. She’s just extraordinary. I talked to Diamanda about the movie at one point, but I didn’t have the resources to make it then. She was definitely my muse, though. 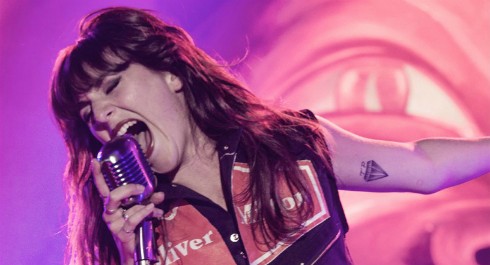 ROBERT McGINLEY: Oh, Molly! Well, after JIMMY ZIP [McGinley’s 1999 short film], I got sidelined. I had to take care of my family, and I didn’t think about DANGER DIVA for a while. Eventually, I thought, maybe with the money I had, I could shoot it in Seattle.

So I asked some friends who are into the Seattle music scene, “Who is the musical equivalent there of LA FEMME NIKITA?” — referring to Luc Besson’s great 1991 movie. I asked, “Who conveys that ethos?” And they all said, “Thunderpussy!” And at first, I was like, “What kind of answer is that?” And they said, “Go check out the lead singer.” So I went and I checked them out.

That was in 2014, and it really got the momentum going. Molly was obviously a great frontwoman and a great singer, but I found out that her performance background was in choreography and dance. She had never been on camera before. But I thought, with the right attitude, we might be able to make it work.

After that, Molly came in to read for the part and it was “Voilà!” Her enthusiasm and charisma won the day. I showed Molly’s audition tape to my daughter, and she said, “Well, now you have no excuse not to make the movie!”

So we went to Seattle and shot it guerilla-style with no money, and Molly was just incredible.

DAILY GRINDHOUSE: So I have to ask, if you could get an implant like the one in the movie that would transform you into a superhuman filmmaker, would you do it?

ROBERT McGINLEY: Interesting question. DANGER DIVA is all about, “How do we stay human?” At the same time, who wouldn’t want to all of a sudden become a better doctor or a better scientist or a better anything? I think we’ll be faced with that question in the near future, and I think we’ll be saying yes. It comes with some real caveats though.

Elon Musk has said that in the future, robots or cyberized humans may regard normal humans as cats. If I was faced with the decision to receive an implant that would help me as a writer or director, it would be hard to say no, because the promise of enhanced creative prowess would be an enormous temptation.

If I choose to say no to technology and vying with other artists for the same writing-directing job, I may be considered obsolete and downgraded from my cyberized competition.

The decision to get an implant is the ultimate “Faustian Pack” with technology and is similar to the question that the character Devi faces to ensure her survival. 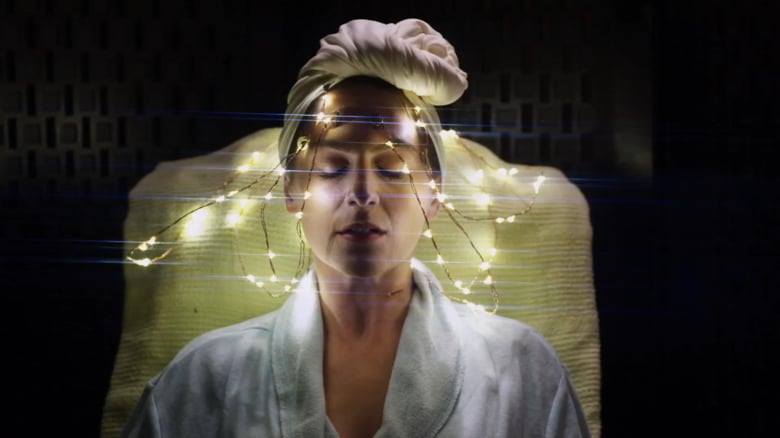