Peter Strickland has gained a reputation for taking on familiar genre conventions and giving them highly unexpected tweaks thanks to his previous two features. BERBERIAN SOUND STUDIO approached lurid ’70s Italian horror from the perspective of a protagonist working on the sound design of a horror film whose mental state rapidly deteriorates as the job drags on, while THE DUKE OF BURGUNDY infused the surreal sexuality of Jess Franco and Jean Rollin with a shockingly grounded romantic relationship between two characters who would have been set dressing in many of either of those exploitation legends’ films. With his latest feature, IN FABRIC, Strickland has taken another daring leap with his most straightforwardly comedic work thus far.

It’s the post-Christmas shopping rush, and bank clerk Sheila (Marianne Jean-Baptiste) is trying to get back into the dating scene while dealing with an increasingly awkward situation at home with her adult son Vince (Jaygann Ayeh) and his obnoxious girlfriend Gwen (Gwendoline Christie). Sheila goes to Dentley & Soper’s, whose hypnotic ads seem to dominate the television airwaves, and is convinced by a cryptic saleswoman (Fatma Mohamed) to splurge on a beautiful red dress that mysteriously fits as though it were made specifically for her. Shortly thereafter, strange happenings occur in Sheila’s house and she’s plagued by upsetting nightmares. But those nightmares are equalled in horror by whatever is happening in the back rooms of Dentley & Soper’s, which is something much more sinister than just a “Trusted Department Store.” 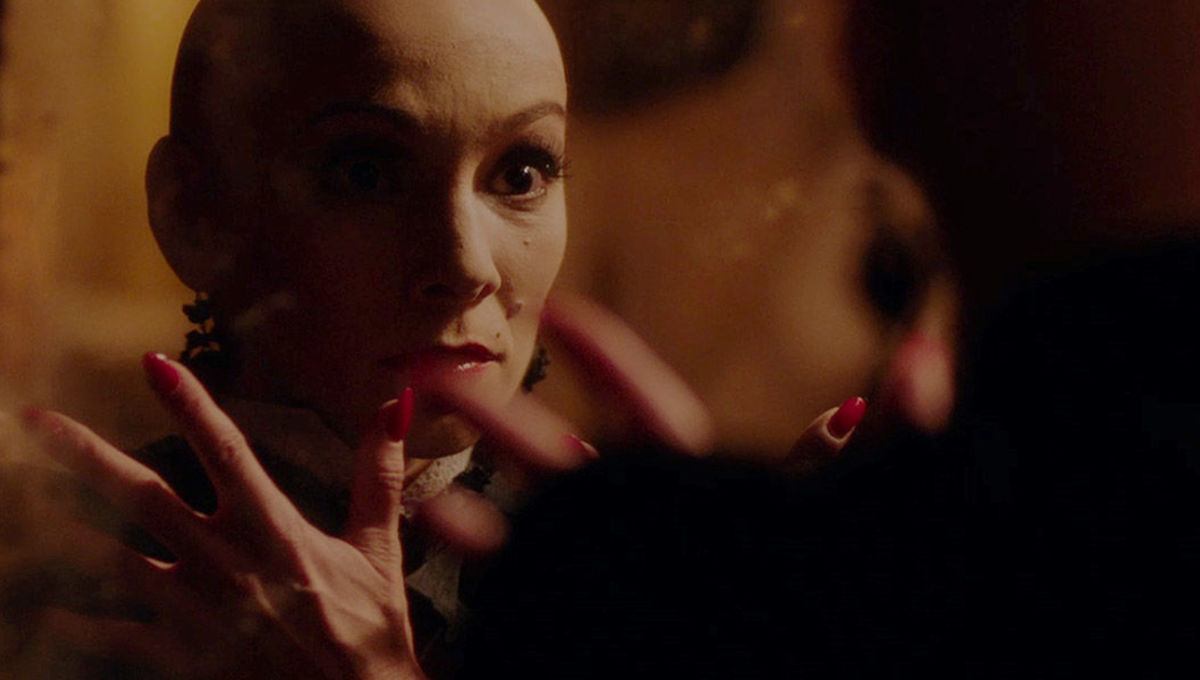 Where THE DUKE OF BURGUNDY infused its highly stylized (and fetishized) world of Euro-exploitation surrealism with genuine emotion and humor, IN FABRIC takes the basic concept of a recognizable genre trope–a haunted or cursed dress–and spins off into increasingly bizarre territory. Fatma Mohamed, who nearly stole the entirety of THE DUKE OF BURGUNDY in one scene as “The Carpenter,” is given a much larger part here as one of the loquacious drones (Or perhaps the queen?) who interact with shoppers at the store. Strickland gives her and Richard Bremmer (as “Mr. Lundy”) loads of impenetrable dialogue, each employee of the store seemingly incapable of speaking in anything but labyrinthine sentences.

Strickland spends roughly the first half of IN FABRIC establishing Dentley & Soper’s as a place of strange rituals and inexplicable supernatural happenings. But in its second half, the film jets off in a totally different direction that puts the haunted dress in an almost cartoonish “kitchen sink” world. As with his previous features, IN FABRIC is technically flawless–the performances are excellent, it’s impeccably designed and shot (by Ari Wegner, who previously shot William Oldroyd’s LADY MACBETH), and it has a spectacular score by Cavern of Anti-Matter. What really sets it apart from Strickland’s previous work is the fact that more than anything he’s done yet, IN FABRIC plays like a macabre and flat-out hilarious nightmare encompassing some all-too-familiar familial difficulties and workplace misery. IN FABRIC is arguably Strickland’s strangest feature yet, which is really saying something. But it’s also an uncommonly effective mixture of horror and comedy, one of the funniest (and most unsettling) films of the year.