Home  ⁄  The Wire  ⁄  [THE DAILY GRINDHOUSE INTERVIEW] SHAUN A. ROBINSON, DIRECTOR OF ‘THAT’S NOT A KNIFE!’

Not every determined and talented actor that leaves the “Land Down Under” for Hollywood looking for fame achieves Crocodile Dundee-like success right off the bat. Actor and filmmaker Shaun Robinson wants to educate the unversed on just how tough it is getting gigs in Hollywood via a new documentary, THAT’S NOT A KNIFE!! 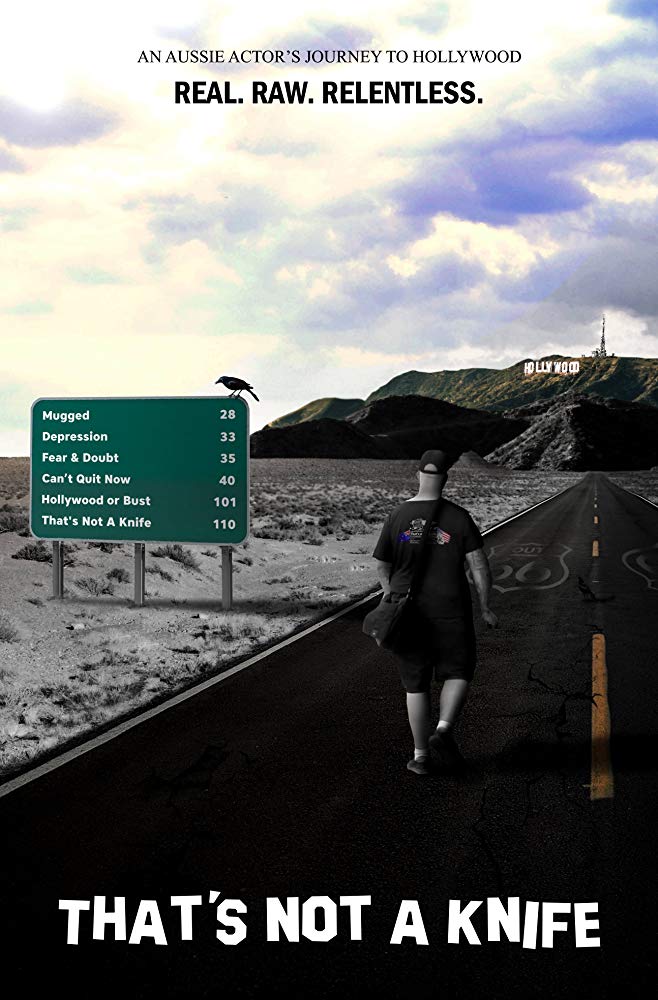 Do you have to be a documentary fan to make one?

No, I don’t think so. I think you just have to want to tell a good story.

Did you sit down to watch any similar-themed movies before filming?

No, I felt like watching other documentaries would influence mine in some way, and I wanted to try and remain as natural and as true to the context as possible.

Has there been a movie or series like this before?

It’s hard to say. Most likely the basic concept of following your dreams has been explored many times before, but this is the story of my journey, and the people I meet along the way, who are following their journeys. Our stories are unique, my story is unique, your story is unique. I feel it’s important to give people a vehicle with which to tell those stories.

What is the goal of THAT’S NOT A KNIFE!?

The goal is to help inspire people the way that I was inspired, the documentary isn’t about the destination so much as it’s about the journey, and how everyone’s journey to the same place can be so different sometimes. I want to help creatives like me create their own pathways to Hollywood.

It was Paul Hogan who inspired me to go to LA. The title represents that inspiration that I felt from observing his journey and how he had achieved his success; if he could do it, why can’t I? I feel the title embodies that Aussie spirit and plays on the connection between Paul Hogan and the Documentary he inspired.

How big is Paul Hogan in Australia?

Paul Hogan is an iconic Australian actor — some would even say, an absolute legend. CROCODILE DUNDEE has become synonymous with Australia and what it represents to the rest of the world. Because of him, the world thinks we’re all like Mick Dundee, and secretly, we love him for it!

Does everyone from Australia head to Hollywood expecting to be the next Paul Hogan?

I think a lot of people head to Hollywood expecting to walk straight off the plane and into a Hollywood blockbuster. Sometimes, very occasionally, that happens; most of the time though, it’s the complete opposite. The struggle is real and it’s only once they get there, that a lot of them realize it’s not going to be as easy as they thought it would be.

Had any friends that have achieved success over there? What’s their secret?

I have a few friends who have had success in the industry, they don’t have a secret but they’ve usually worked hard, sacrificed a lot, and been rejected more times then they can count, but kept on persevering, then rinse and repeat.

Can you tell us what the plans for the film are?

My producer, Lucinda Bruce (of Lady of the Light Productions), came on board last year and has helped me steer the documentary towards our final destination of distribution. She has been a huge help in implementing a game plan of where we would like the documentary to end up, we’re aiming for a Festival release, with the hopes of that leading to a Theatrical release at some point, then VOD followed by an eventual release on Australian Network Television.

Are you an actor by trade or filmmaker?

I don’t class myself as a filmmaker. I’m more comfortable calling myself an actor. I became a filmmaker out of the necessity I felt to create work for myself. I’ve had done other jobs in the past — truck driving, security guard, barman — but acting is what I love.

What’s next for the film? Is it still in production?

Currently, the film is in its final stages of filming. There are a few last-minute interviews being organized, but the editing process has already begun, and we’re hoping to have a final cut done by the end of April.