Home  ⁄  The Wire  ⁄  [THE DAILY GRINDHOUSE INTERVIEW] THE SOSKA SISTERS

In the back of the celebrity room at Texas Frightmare weekend there were more than a few bright spots. The stars of Bates Motel held down one wall, drawing in large crowds of adoring fans holding posters and prints awaiting signatures, Wilford Brimley held a stately cowboy-hat-clad court over a consistent line of The Thing diehards, and numerous other celebrities mugged for the cameras and signed glossy 8x10s, but one corner seemed just a little bit brighter and just a little bit louder.

That corner belonged to the Soska Sisters, the indomitable forces of joy behind horror films like AMERICAN MARY and DEAD HOOKER IN A TRUNK, hosts of Blumhouse’s horror game show HELLEVATOR, and occasional actresses, as in writer/director Lauro Chartrand’s upcoming horror film CRIMSON CREEK MASSACRE. If there’s one word to describe the Soska Sisters, that word is ‘enthusiastic.’

I sat down with them on Sunday afternoon as the convention wound a close, though the line to meet them certainly hadn’t. The twins pried themselves away from throngs of smiling fans eager for their turn to experience the duo’s high-intensity fan appreciation and hugs for a few minutes to talk acting, directing, professional wrestling, and RABID. 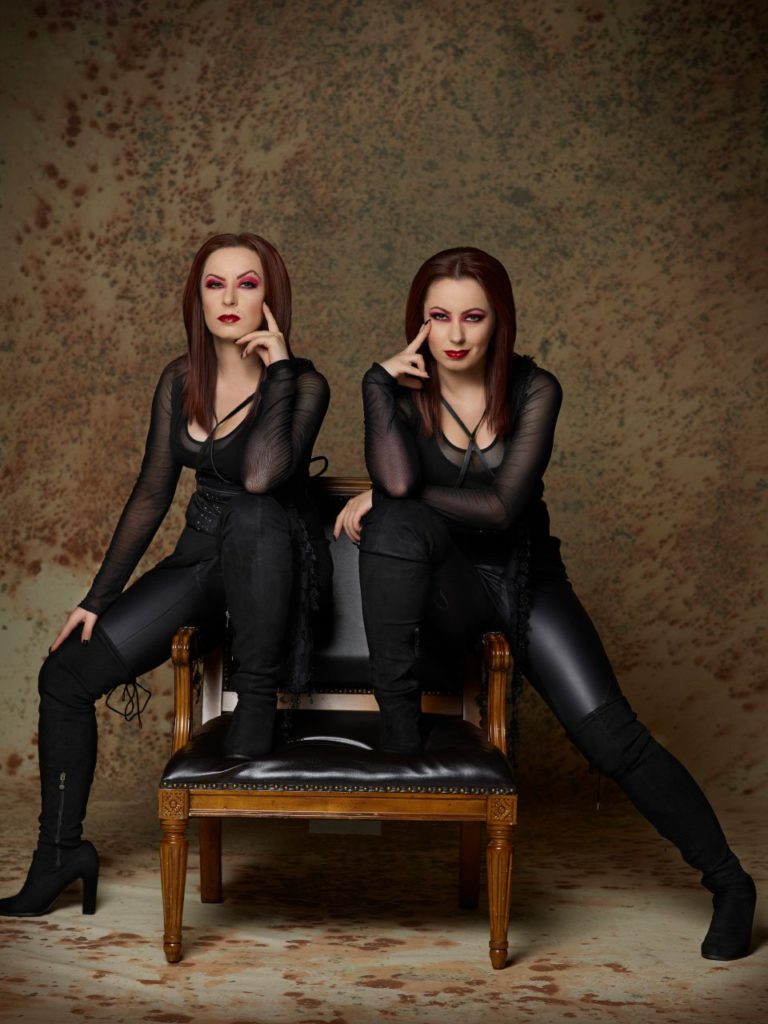 Daily Grindhouse: What are the major differences between being primarily behind the camera like with your film work and your on-camera work like with HELLEVATOR and the upcoming CRIMSON CREEK MASSACRE?

Jen Soska: I would say its vacation. It’s a brain vacation. I just sit back and say, “Not my circus, not my monkeys.” Although my director brain does go, “Oh no, oh no, oh no” and I have to go, “No, stand there and look pretty, remember your lines, walk where you’re supposed to…”

Sylvia Soska: Yup! It’s a brain vacation…but I’m so utterly controlling that even when I’m talent I’m watching them and I’ll lean over to Jen – and I know I’m mic’d – and I’ll just go, “Do you not think they know that that’s there…” and I’ll also see myself on frame and just go, “You might want to frame that up a bit different…” and they’re always just like, “Can you just stop backseat directing, Sylvia? Just torture people! That’s what you’re here for!”

The Soskas exclaim and clap in unison. The Soska sisters do a lot of things in unison. If they were any less charismatic or joyful it might be threatening. Well, it kind of is anyway, but that threat is undermined a bit by their undeniable enthusiasm. 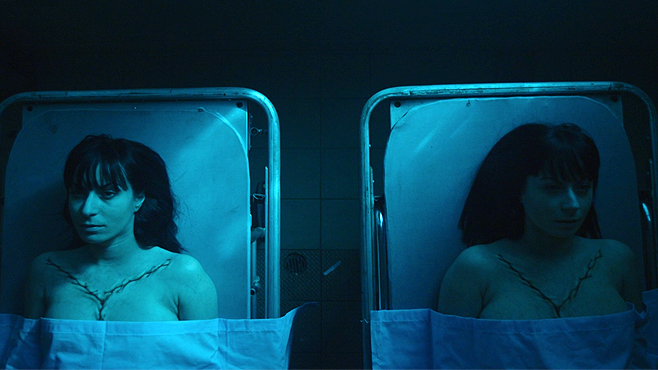 DG: This is… a wrestling question. You’re both known to be big wrestling fans, having worked with the WWE on multiple occasions now with SEE NO EVIL 2 – which I proudly own on Blu-ray…

Soskas In Unison: Thank you!

DG: And with VENDETTA – which is an underrated film – Dean Cain is fantastic.

Jen: Dean Cain, let me tell ya, he has never been more badass.

DG: No, no, you’re 100% right. If you decided to lace up your boots and become wrestlers, what would your dream gimmick be?

Jen: Yeah, like the badass managers. We come in and we just Hollywood everything, taking over the talent and being like, “He can’t do this!” Then we’d do makeovers, too. We take a wrestler and we’re like, “We’ll come back with a much better look.” Then we’d come back and everyone would just be like, “Oh my god, what are they doing?”

Sylvia: You know, just that kind of foolishness like they had in the 90s. In one RAW [WWE’s long running flagship show. – DG], anything could happen! Anything. Especially if an ambulance came! You knew the other guy was in there! You just knew it! 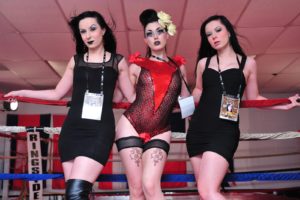 DG: Did you see Braun Strowman flip that ambulance a few weeks ago?

DG: That man picked up an ambulance – Roman Reigns was in that ambulance…

DG: Let me tell ya, I was very happy to see an ambulance with Roman Reigns inside of it flipped.

DG: I met The Shield (Roman Reigns, Dean Ambrose, Seth Rollins) a few years back and everyone was sweet as punch – except Roman. He was too busy hitting on my friend’s sister to be nice.

DG: Bringing it back to film… In the wake of Jordan Peele’s GET OUT, the mainstream seems to just now be becoming aware that horror can be socially conscious and I just point to things like AMERICAN MARY, or back even farther to say… Cronenberg’s RABID. 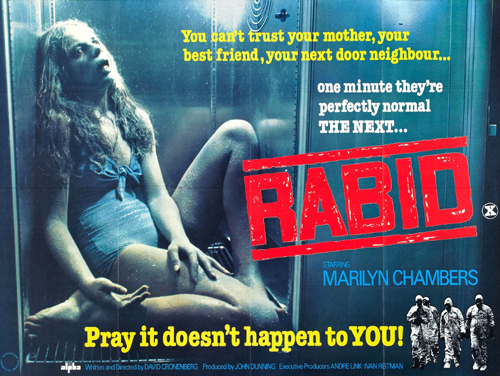 DG: We know that your remake of that is in the works right now, and I’m wondering since neither of you have ever shied away from saying exactly what’s on your mind or how you feel about things– what does Cronenberg’s RABID say about society to you and in turn what will yours say?

Jen: I don’t think anyone should do a remake, or a sequel, unless they have something new to bring to it. Some of the main differences between David and us is first that we’re women, and then that we’re Catholic. We believe in life after death – David [Cronenberg] does not.

DG: There’s a very fatalistic and nihilistic quality that permeates his work. That definitely does color Cronenberg’s films.

DG: That alone could lead to an interesting angle on the film. His atheism is in every frame and in every shot of his films in one way or another.

Sylvia: I think getting pushed back a little – because we were going to shoot last summer and we’re going to shoot a little later on – the political atmosphere has changed and we were not anticipating that. We’re not supposed to say it, but Jen and I wrote the script, so I’m not technically saying that if I am right now…

Jen laughs. Their laughter is infectious – which is appropriate, given the subject matter at hand. I made sure to clarify that we could print that, just for the record.

Sylvia: It ended up containing a lot of stuff that we were feeling already, but after the election it was just amped up. There are some scenes in there where everyone was like, “Now that this has happened do you realize what this means?” Because, what is RABID? It’s about a dude trying to control a woman’s body.

It’s a very interesting body horror because as a woman your body is looked at in so many different ways. You’re never not being looked at. So, what if – all of a sudden – you could control that?

Sylvia: Oh, absolutely. Women exist in such a rabid world and people act “rabid” around sexy girls. We want it to be a commentary on how people act around one another, what is the instigator of that behavior, what’s the reaction to it? What’s the social reaction to that kind of thing?

Jen: Also, in the first one, maybe because David’s a guy, you see it through Hart’s point of view. [Hart Read, Frank Moore’s character in David Cronenberg’s RABID – DG]. The film is almost more about her boyfriend and how he reacts than it is about her [Marilyn Chamber’s Rose – DG].

Sylvia: It’s strange. That scene at the end when he’s on the phone with her and he just freaks out and smashes the phone, I was always just like, “Oh, I didn’t realize he even liked her that much!”

Jen laughs. We all do, really. Like I said: infectious.

DG: He just seems so cold the rest of the time!

Sylvia: He’s just such a dick to her the whole time. Like, she was drinking blood out of an armpit tube but dude… 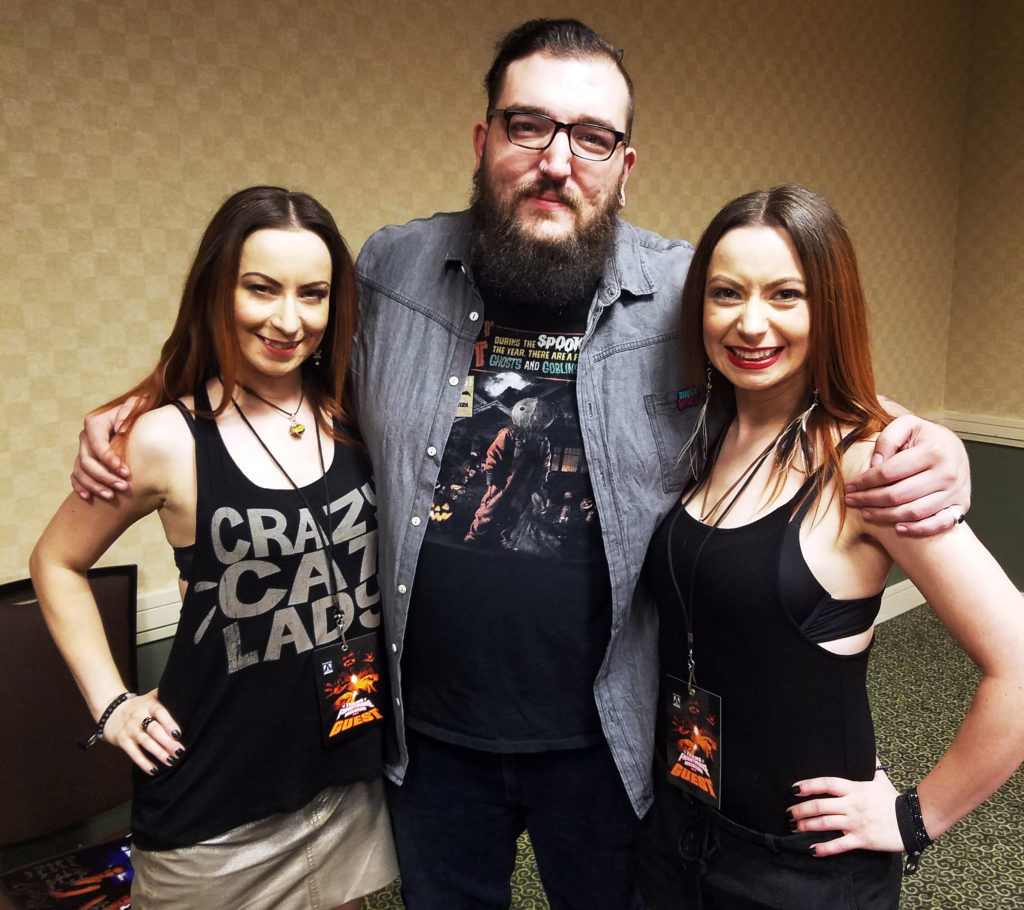 Nathan Steinmetz is a freelance writer, film critic, and junk food aficionado based out of Dallas, TX. In addition to his work for Daily Grindhouse, you can find him waxing poetic about film, all things spooky, and food that’s bad for you over at Humanstein.com.