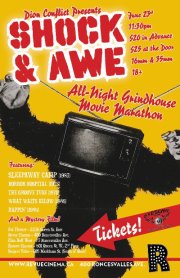 The first SHOCK & AWE Grindhouse movie marathon presented by Dion Conflict back in June of 2008 was a life-changing experience for me. While I had always loved the theatrical experience, I grew up in a place where repertory or art cinemas simply didn’t exist, so to make a pilgrimage to Toronto to meet with like-minded individuals for 10 hours of films was huge. It cemented my love for films, and when I afterwards wandered, bleary-eyed into the sunlight I knew that as long as these events were going to take place – I was going to be there.

And I was. At this point I may as well be the SHOCK & AWE mascot, as along with that first event in June 2008 at the Fox Theatre in Toronto, I’ve attended the second (11/08/2008), third (6/13/2009), fourth (11/28/2009) and fifth (9/25/2010) iterations of the event. I’ve witnessed films like the smutty, Spanish shark movie TINTORERA; the Filipino martial arts blaxploitation film BAMBOO GODS & IRON MEN; John Carpenter and Dan O’Bannon’s immortal student film DARK STAR and much, much more. It’s a raucous good time, and a chance to see some very rare films in a wonderful, inviting environment.

But then it stopped. Organizing the event must have been a nightmare, and there’s really only so many rare and fascinating movie prints that one man can show, particularly on top of regular life and professional responsibilities. I’d bug Dion regularly online regarding when the next event might take place, but who knew if we were ever to see such a thing again?

In March of this year the announcement was made – SHOCK & AWE #6 would be happening at the Revue Cinema in Toronto, ON on June 23rd.

A little older and wiser, I made the excursion to Toronto once again to take in a night of cinema debauchery. Having never been in the Revue before, I had some initial concerns that it might not be as welcoming or comfortable a theater as the Fox – but it turned out to be a needless concern as the staff of the venue were absolutely wonderful and accommodating. Kudos to them for entertaining what must have been a truly unique and difficult endeavour. 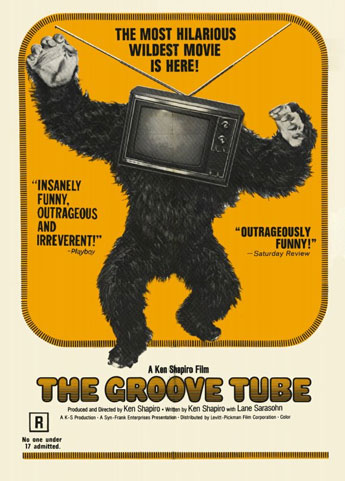 We begin with Ken Shapiro’s trailblazing sketch comedy film THE GROOVE TUBE which came out of Shapiro and Lane Sarasohn’s CHANNEL ONE multimedia theater project in the late 60s. The group included future stars Chevy Chase and Richard Belzer, and was an obvious influence on later television sketch comedy shows like SATURDAY NIGHT LIVE and SCTV, though with a much raunchier slant. THE GROOVE TUBE is also notable as the first film in what I ever saw male nudity – and possibly the first in which I ever saw FEMALE nudity on-screen – as my brother inadvertently rented it on VHS in the 80s thinking it was a kid’s movie.

I was also one of the people that influenced Dion to screen the film, as while it’s a bit inconsistent and filled with dated cultural references, it’s also sharp and funny – and a clear influence on the “anything goes” nature of THE KENTUCKY FRIED MOVIE. Sketches like “Koko The Clown” and “Kramp Easy Lube” remain hilarious, while a clip of Shapiro lip-syncing the song “Near You” while interacting with visibly confused (and agitated) New Yorkers had the crowd rolling with laughter. The short clips made for an inspired opener, and the crowd responded enthusiastically. 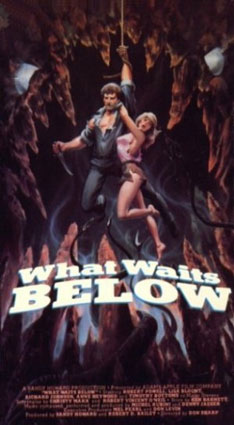 They needed to hold onto that enthusiasm, as next up was Don Sharp’s baffling INDIANA JONES rip-off WHAT WAITS BELOW featuring the underrated Robert Powell as mercenary cave specialist Rupert ‘Wolf’ Wolfsen who agrees to assist the U.S. Military (led by Timothy Bottoms’ Major Stevens) in setting up a transmitter in an underground cave in Central America. But when the transmitter vanishes, it’s up to Wolf and a group of explorers to track it down; eventually leading to them encountering a group of MURDEROUS ALBINO CAVE PEOPLE. Yeah.

It’s an incredibly goofy movie, though doesn’t quite have enough high (or low) points to be laughably terrible. Originally titled SECRETS OF THE PHANTOM CAVERNS (which still appears in the closing credits), it’s a strangely slow-moving tale which completely fails at creating any sense of adventure – and the Lemurians (the Albino people) look supremely silly. It’s not totally worthless – and there were a few funny comments shouted out during the many slow sequences – but it fails rather spectacularly as either a horror or adventure film. 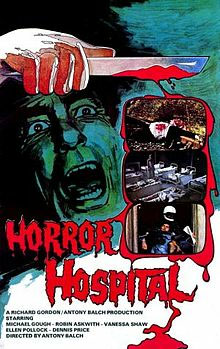 After that bit of stodginess it’s time to get the blood moving again with the campy British horror comedy HORROR HOSPITAL, which is also known as COMPUTER KILLERS for some reason. The truly hideous Robin Askwith (star of the CONFESSIONS sexploitation series) is a musician who decides to take a “hairy holiday” after being unceremoniously dumped by his band. Meeting up with the lovely Judy (Vaness Shaw), the two eventually arrive at the titular hospital, where the evil Dr. Christian Storm (Michael Gough, who later found fame as Alfred in the Tim Burton Batman films) enjoys experimenting with brain surgery and cutting the heads off of would-be escapees with a car-mounted retractable blade. And it gets even sillier.

Just a great load of fun, with Gough chewing the scenery as the wheelchair-bound doctor, who carries with him an extremely goopy secret. Even better is the late Skip Martin as the diminutive Frederick, who has most of the film’s best lines (“Don’t forget to brush your teeth.”) before revealing himself to not quite be as menacing as he first appears.

This is the mid-point of the evening (about 4 AM) and a good opportunity to check out the merchandise table – where Dion is selling rare DVDs for cheap. There are also the occasional short or trailer shown between films, and – of course – opportunities to win a collection of budget priced merch. I’ve been through this six times and have never won a damn thing. THE GAME IS RIGGED! 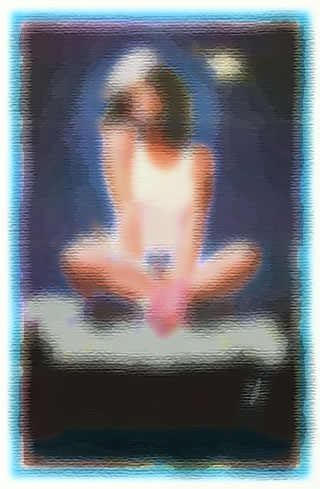 Next up was the MYSTERY FILM! At every SHOCK & AWE there’s a mystery film shown, but the audience is sworn to secrecy regarding its title. Literally. Dion actually comes out and makes us say an oath and everything.

So I can’t reveal the detail of the film, but what I can reveal is that it was a delightful slice of 80s cheese featuring some of scuzziest attitudes and fashion you’re likely to ever encounter. It also continued the SHOCK & AWE tradition of audience participation as we were instructed to cheer, clap or boo depending on what characters were on the screen – a good way to wake up those attendees already starting to doze. 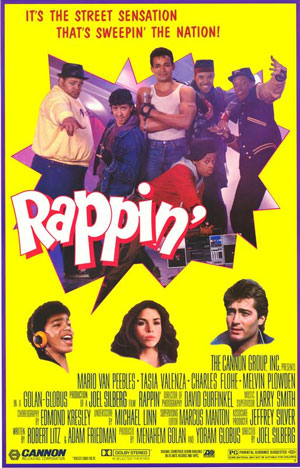 Exhaustion is starting to sink in at this point, but I certainly recall a trailer for GHOST DAD playing – but undead Bill Cosby has nothing on the silliness of what is coming up next.

Following the success of the break-dancing movies BREAKIN’ and BREAKIN’ 2: ELECTRIC BOOGALOO, Cannon Films continued to embrace sanitized street culture with RAPPIN’, which features an impossibly good-natured Mario Van Peebles returning to his home town after a stint in prison. Reuniting with his crew (who like to deliver groceries and dance fight), John Hood (Peebles) has to deal with a rival gang whose members are working for a greedy developer (SEALAB 2021’s Harry Goz) who is trying to force his neighbours out of their homes. Seriously, how could this movie not have been called RAPPIN’ HOOD?

As Dorkshelf critic Andrew Parker said earlier in the night, 2003’s BAADASSSSS! must have been Mario Van Peebles’ penance to his father for ever being involved in such a ridiculous film, which saps every bit of social commentary from the artform (despite Peebles being dubbed by Ice-T, who even makes a brief appearance), while still having the balls to end the film with the entire neighbourhood sending the developer packing through the sheer power of RAP. Even better is the closing credits, which gives everyone an opportunity to.. well.. what’s the opposite of shine? A young Kadeem Hardison and a pre-ER Eriq La Salle show up as members of Hood’s crew, while THE LAST DRAGON’s Leo O’Brien appears as John Hood’s troublesome little brother Allan. I yelled “LEROY!” at the screen to no avail. 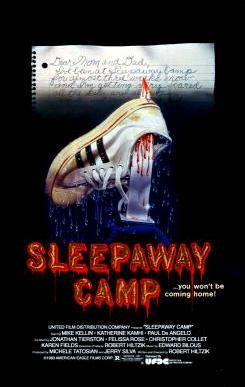 And then we had the main event: Robert Hiltzik’s truly fascinating slasher film SLEEPAWAY CAMP, which mixes summer camp hijinks with gory murders, and has one of the most memorable twist endings in horror movie history. It’s also entertainingly profane, with an age-appropriate cast doing some great work and a wicked streak of black humor. While often thought of as a FRIDAY THE 13TH rip-off, it’s all-together more clever and entertaining, and it’s a shame Robert Hiltzik retired from the film industry afterward – at least until 2008’s RETURN TO SLEEPAWAY CAMP (which features appearances from some of the cast of the original).

Great looking print, too. One of those “must see” horror films.

And with that it was time to retreat into the blinding sunlight, battered and bruised but certainly not beaten. Dion helpfully distributed packages of ALL BRAN to those that had the gumption to make it to the end, and even as my body cried out for sleep I couldn’t help but reflect at the sheer effort that goes into making an event like this possible. It really crystallizes just how vital and important repertory cinemas are to cinema as a whole, and how lucky we are to have people like Dion Conflict working to preserve these forgotten gems.

As per usual, I’m already anticipating the next one. You’re all invited.