Hey there Grindhouse fans! Feeling out of place because you could really care less about the NCAA? Do you really want to bring your work productivity down to zero by paying too much attention to brackets? Well, you’re in luck because you can participate in DAILY GRINDHOUSE’S INAUGURAL MARCH MADMEN, MAYHEM, & MANIACS TOURNAMENT.

We have carefully curated sixty-four of the greatest characters from horror, exploitation, Blaxploitation, grindhouse, and drive-in cinema, and they’re going to be duking it out for the remainder of the month. We’ve got some tough match-ups in the first round: The west coast Carpenter Conference features David Collins from THE GUEST taking on The Terminator, and the Killbots from CHOPPING MALL fighting Eric, The Phantom for retail supremacy. Not to be outdone, the very strong east coast Craven Conference has the Shogun Of Harlem battling Monroe Feather from THREE THE HARD WAY and Cropsey taking on Madman Marz for the soul of upstate New York. 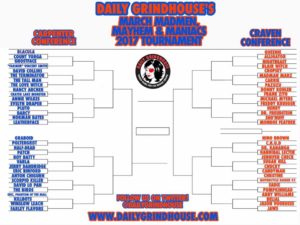 Winners will be decided by daylong Twitter polls, which will begin on Thursday, March 16th with the Carpenter Conference and continue Friday, March 17th with the Craven Conference. All brackets must be submitted to mavanderbilt@gmail.com by 12 A.M Central time this Wednesday. Do you want to win? Re-tweet those Twitter polls and get your friends to vote your way. Anyone who submits a perfect bracket will receive some cool junk from assistant editor Mike Vanderbilt’s house (and if you’ve been to his place, you know he’s got some cool junk).

What are you waiting for?! Fill out that bracket; make it a PDF or print it out and handwrite it, just get it in before Thursday.