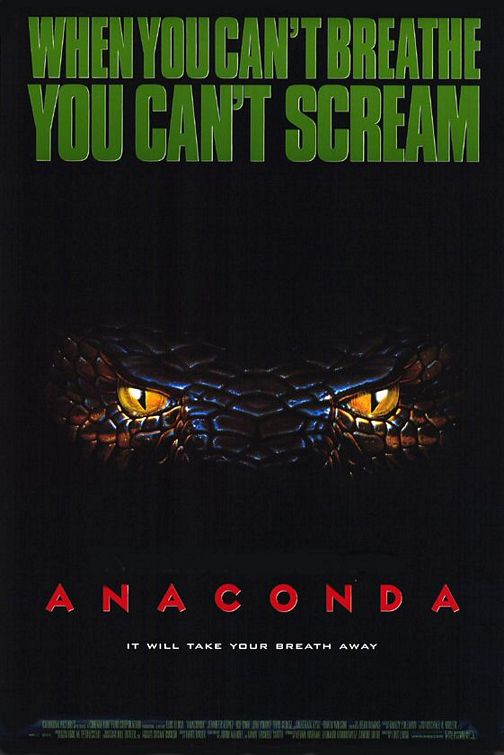 “My anaconda don’t want none unless you got buns, hun.” – Sir Mix-A-Lot.

In 1997, Hollywood heard that challenge, and served up Jennifer Lopez.

Spoiler warning:  The anaconda wanted some. 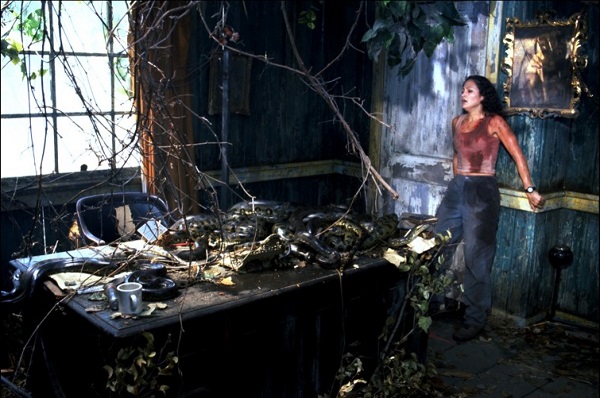 ANACONDA is the kind of movie that has become commonplace today through venues such as DTV and the SyFy network – a cheap, tongue-in-cheek production where the title alone is the premise.  More recently, these schlocky giant-reptile flicks have become the domain of the C- and the D-list, but originally they were true B-movies, with a long Hollywood history that included highlights such as CREATURE FROM THE BLACK LAGOON — a specific model which ANACONDA bites off of heavily — and by the time of ANACONDA’s release in the mid-‘90s, there was less competition in the territory of schlocky animal-horror pictures than there might have been before or after.  So in a calendar year best remembered for its flagship ‘Best’ movie — TITANIC — it was a nice change of pace to take a seedier, sillier boat trip.

The script, credited to Hans Bauer and the writing team of Jim Cash & Jack Epps Jr. (best known for macho romances like TOP GUN and TURNER & HOOCH), with uncredited work by Mark Haskell Smith, is excellently direct:  An expedition carrying a crew of documentarians doing a story about an Amazonian Indian tribe for National Geographic charters a boat to travel deep into the rainforest.  Along the way, they encounter a shifty character of vague ethnic origins who eventually commandeers the expedition in order to track down a really, really big snake.  Things fall apart. Ribcages get constricted.

Director Luis Llosa does a solid enough job with the premise, and throws in some awesomely kooky Raimi-esque camera shots from the swift-moving snake’s point of view (courtesy of JAWS cameraman Bill Butler), but really, this is a fairly average movie at best – until you factor in its cast, who are what make this movie most worth watching and who, taken together, turn out to be something like the ’86 Mets, in their way.

Start with likable ‘80s heartthrob Eric Stoltz, best known to previous generations as Keith Nelson in SOME KIND OF WONDERFUL and Rocky Dennis from MASK. He also nearly had the lead in BACK TO THE FUTURE, which means in a Bizarro universe, we get Michael J. Fox in ANACONDA, which kind of makes me yearn for the Bizarro universe. Back in our own world, we’ve got Eric Stoltz playing the standard square-jawed dimple-chinned heroic lead — but in a fun narrative rope-a-dope, he gets sidelined early on, through an amazingly dumb plot twist.

There’s also a role for Kari Wuhrer, who is incredibly familiar to some of us guys who remember the prehistoric era of MTV, back when it had actually awesome things like music videos and Colin Quinn.  She became a late-night cable staple and still appears on TV, although after this film and the similar-spirited EIGHT-LEGGED FREAKS I don’t think I’ve ever seen her on the big screen again.  Which is a shame, because those are some really flattering close-ups.

Kari’s love interest in the movie is none other than a post-BOTTLE ROCKET but pre-superfamous Owen Wilson.  I like this casting because I can imagine a pre-fame Owen Wilson watching MTV in the late-eighties and day-dreaming about going on a National Geographic voyage down the Amazon with Kari Wuhrer.

Look, if you’re not a huge Owen Wilson fan, I can’t help you.  It’s kind of amazing how he appeared in movies around this time, with such a distinct persona, right out of the gate:  Even early in his career, playing stock doomed characters and sixth leads, he was successfully bringing his own laconic comedic rhythm into crowded movies like ANACONDA, THE CABLE GUY, ARMAGEDDON, and the far shittier THE HAUNTING and still making an unforgettable impression every time.  Wilson has one of ANACONDA’s most memorably stupid lines and he knows exactly what to do with it:  “Is it just me, or does the jungle make you really horny?”

Then there’s Australian actor Jonathan Hyde, who not only distinguishes himself with the second-best death scene in ANACONDA, but also with being the only member of the cast who appeared in both this and the aforementioned TITANIC.

Let us not forget, please, ANACONDA also houses a small role for the ubiquitous Danny Trejo, appearing as a routine bad guy long before his modern sex-symbol status.

But as good as the rest may be, the movie belongs to three actors in particular – to Jennifer Lopez and to Ice Cube, as the expedition’s director and cameraman (respectively), and to Jon Voight as the big-game hunter who’s nearly as dangerous for them as the hungry giant reptile is. Lopez is really the lead character of the movie – aside from the snake, obviously – and it’s probably faint praise to say it, but I really liked this Jennifer Lopez.  This was right before OUT OF SIGHT, which is by far the best movie she was ever in, and before all of the lame music and romantic comedies.  She was like a sexier Michelle Rodriguez – not quite an epic tough-chick archetype, but something more down to earth, a convincing survivor.  In ANACONDA, the role doesn’t call for her to do much more than look concerned all the time while also looking pretty in a constantly-wet tank top, but she gets the job done perfectly.  Sadly, the brief window of Jennifer Lopez cinematic excellence was not to last, and nowadays, much as I enjoyed THE BOY NEXT DOOR, it feels like it is closed forever.

Ice Cube is another performer whose career has had a dramatic arc – nowadays we’re completely used to seeing him in PG-13 fare, arguably to a fault, but in 1997 we weren’t at all.  Back then, we were still close enough to the N.W.A. days that there could be some curiosity as to how Ice Cube could be contained by a PG-13 rating (which is indeed the rating which ANACONDA weirdly carries).  There are certain words that a reasonable fan of the man and his music might expect Ice Cube to use when he’s being chased by a giant snake, and he’s not allowed to use them.  That adds an extra layer of suspense to the movie.  If you’re a fan of drinking games, try taking a shot every time Ice Cube looks like he’s about to swear, thinks of the MPAA, and dutifully bites his lower lip, holding back the obvious. (Actually don’t do that, or you may drown.) 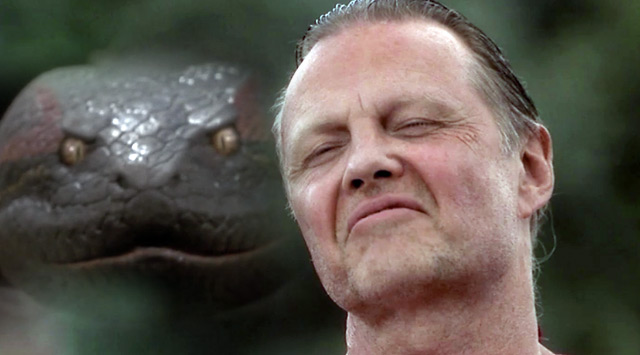 Last, you have Jon Voight.  This essay has already said more about ANACONDA than needs be said, but it would simply be perverse to cut things short once the topic of the movie’s most bizarrely entertaining performance arises.  Nonetheless, that’s exactly what I’m gonna do. One must discover this piece of work for oneself, not have it explained. Voight plays this movie as close to outright comedy as it can be played while still pretending to be a monster movie.  His accent is vague and mysterious, his character’s vague and mysterious nature is obvious, his demeanor is ridiculous, and his final scenes are tremendous.  In a long and distinguished acting career, it’s unlikely that ANACONDA goes on Jon Voight’s highlight reel, but it kinda should.

In the realm of B-list giant-reptile thrillers, ANACONDA is no ALLIGATOR, and you’ll find plenty better scenes starring evil snakes in movies as diverse as CONAN THE BARBARIAN, RAIDERS OF THE LOST ARK, and KING KONG, but as Judd Apatow said not terribly long ago in defense of Tim Allen, “We all look like a piece of shit, standing next to Tom Hanks.”

Tim Allen may suck nine times out of ten, but he was really good that one time in GALAXY QUEST, and when I say that, maybe you’ll know what I mean when I recommend ANACONDA to you.