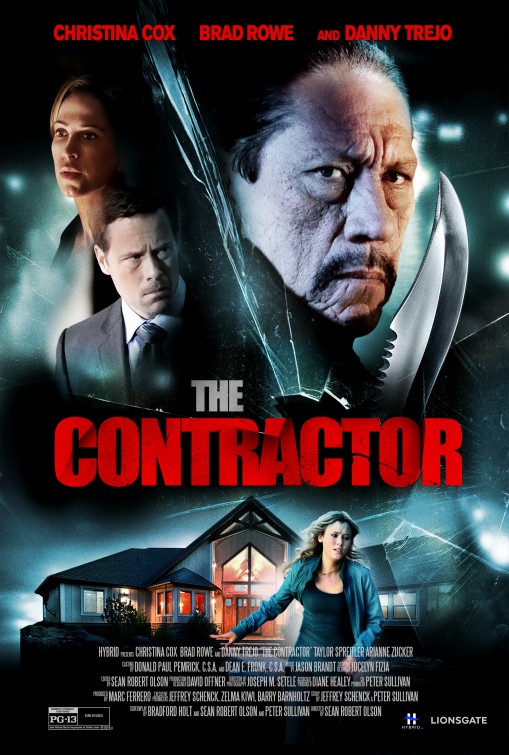 Aside from having been a huge Danny Trejo fan since at least 1995 (when he co-starred in HEAT, of course), the main reason I watched his new movie THE CONTRACTOR is to be sure that it actually exists. I came across the trailer somehow and immediately assumed this was some kind of joke. There were no explosions in the trailer, so I felt reasonably sure Robert Rodriguez wasn’t directing, but this concept isn’t pitched too far from the same batting zone. Danny Trejo as a day laborer with murderous ambition? That’s exactly how MACHETE starts! The difference is that, however one feels about the MACHETE movies, there the satirical intent is obvious. THE CONTRACTOR is played for straights.

Let’s look at that trailer together:

Understand it was clear from the get-go that by pressing play I’d be wasting two hours of my fairly busy life. For one thing, the entire plot of the movie is in that trailer, from goatee to pubis, leaving no surprises except the astoundingly anti-climactic ending. Those trailer editors used every last bit of remotely dramatic footage, regardless of how undramatic the scene from which it’s pulled. Believe me, this is as kinetic as it gets. THE CONTRACTOR has that kind of visual inertia so common to the softcore  movies that aired in the middle of the night throughout the 1990s. Really, it wouldn’t have been out of place had it aired then, as far as artistic aspiration goes, except it isn’t even able to offer any base titillation. 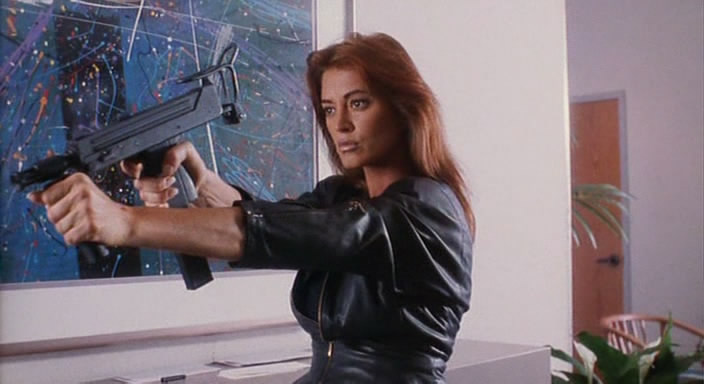 Sadly, not a scene from this movie.

What drew me in to THE CONTRACTOR and what kept me watching was pure incredulity. A family of blue-eyed blondes have their perfect lives in Malibu upended when an evil Mexican day laborer becomes fixated on them. In other words, the only thing distinguishing this movie, the one aspect setting it apart from the rest of the very many movies like it, is the cataclysmically oblivious racism of the premise.

The subgenre of the domestic thriller probably began back in the 1950s or 1960s. 1948’s KEY LARGO, with Edward G. Robinson, Humphrey Bogart and Lauren Bacall, feels like a warm-up, a preliminary entry. Several of Hitchcock’s movies qualify, although I think the seminal movie in this genre is 1962’s CAPE FEAR, where vengeful convict Robert Mitchum menaces stalwart attorney Gregory Peck and his wife and child. In addition to being a still-effective feat of suspense, the spectacle of noir icon Robert Mitchum terrorizing the all-American Gregory Peck has fascinating countercultural subtext and overtones. Martin Scorsese remade CAPE FEAR thirty years later with Robert De Niro in the Mitchum role. While a solid thriller, the remake is strictly second-tier Scorsese, notable mostly for the ominous sexuality of the villain character which the original couldn’t freely explore. In between the two CAPE FEARs, there have been a mountain of films, some classier than others, that similarly exploited the fears of suburban folk that one day they may be confronted by a malevolent intruder threatening their homes and families. The 1990s were a boom time for the genre, with plentiful examples such as UNLAWFUL ENTRY, SINGLE WHITE FEMALE, PACIFIC HEIGHTS, FEAR, and THE HAND THAT ROCKS THE CRADLE. Michael Haneke’s FUNNY GAMES takes a loftier, meta- approach. Ben Stiller’s THE CABLE GUY plays the genre for comedy. At this point, the only variation on the domestic thriller we haven’t seen is blatant ethnic stereotyping. 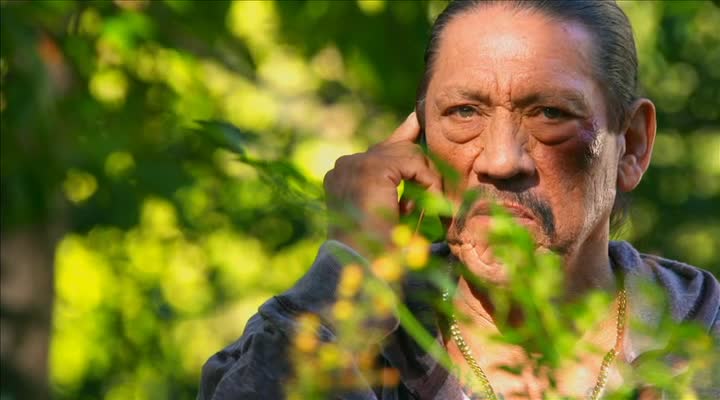 Maybe the most fascinating thing about Los Angeles is that it’s a city where worlds collide.  If you drive all the way down Sunset Boulevard, you can get to the ocean, to Malibu, to one of the richest possible neighborhoods in LA, or you can go in the opposite direction.  You can pass a Home Depot where day laborers eager to work wait in the parking lot, you can keep going all the way past downtown LA where Sunset becomes Cesar Chavez Avenue and heads into Boyle Heights, where the demographics are much different and the area feels actually populated, like a real city.  I’ve met mariachi bands on the street down that way.  It’s a far cry from the remote haughtiness of Malibu, which is surrounded by some of the most beautiful scenery on earth but is prohibitive and even exclusive.  And by the way, this is only to mention two aspects of the broad spectrum of cultures that make up the whole of Los Angeles.  Well-meaning white filmmakers like Lawrence Kasdan (GRAND CANYON) and Paul Haggis (CRASH) have tried to explore this divide their own way, nobly if presumptuously.  Critics bemoan the bleeding-heart approach but we now have an example of something far worse than syrupy liberalism could ever be, courtesy of the makers of THE CONTRACTOR. 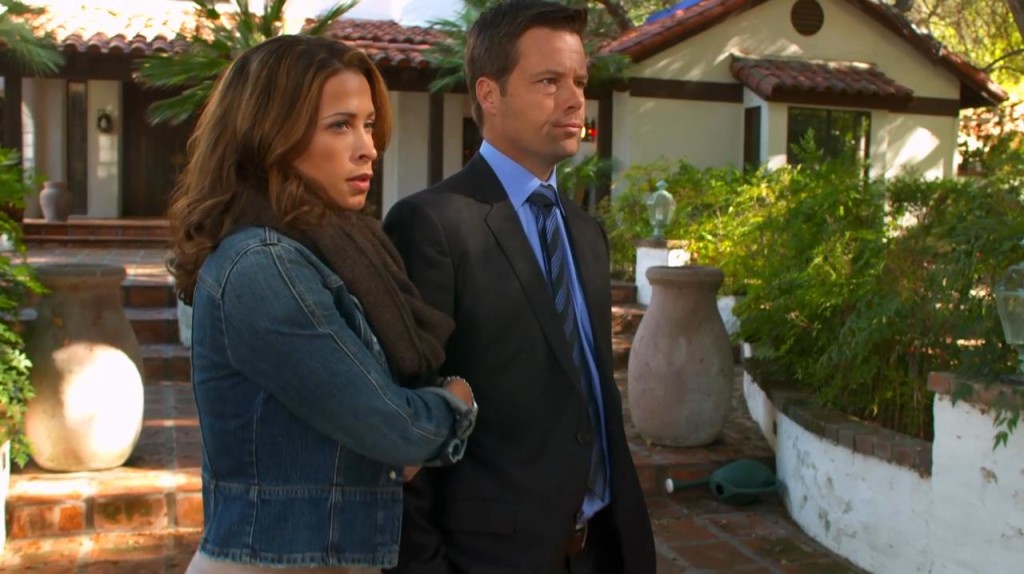 THE CONTRACTOR opens with shoddily-processed black-and-white footage of a police chase. A Mexican teenager is running down an alleyway in a suburban area, pursued on foot by two officers, proclaiming his innocence. Undeterred, the cops catch up to him and put him in handcuffs. Boom. Cue opening titles. (Not the most dramatic pre-credit sequence of all time, but okay.) Then we get to meet the Chase family of Malibu. Paul, played by a guy named Brad Rowe who as far as I can tell is an exact genetic cross between Greg Kinnear and Guy Pearce, is a prosecuting attorney with a really long commute. His wife Liz is played by an actress named Christina Cox with a long resume in TV. Liz and Paul have a daughter named McKenzie, which is the most realistic part of the movie — “McKenzie Chase” is exactly the name these people would name their only daughter. McKenzie likes horses, and this is the kind of movie where McKenzie’s dad buys her a horse on a whim and we’re expected somehow to relate to these people. Oh, and McKenzie also has asthma. If you can predict that McKenzie’s conspicuous habit of  forgetting her inhaler everywhere she goes is going to factor into the movie’s climax, what’s your next trick? Demonstrating gravity by dropping a fork?

The plot, such as it is, kicks in pretty soon. Liz is planning a charity event to be held at their house, which is the reason for hiring the titular contractor. A guy named Javier shows up. He looks like Danny Trejo. You know, face like a mountain range, fighter’s stance, gravelly voice, long hair pulled back in a ponytail.  We don’t see the tats but we can sense they’re there. In the thank-Heaven-for-small-favors department, the Chase family doesn’t act scared of Javier right away. They talk to him in jubilant, patronizing tones. Javier even teaches McKenzie how to say a couple words in Spanish, “hola” and so on, although, not for nothing, they’re the kind of words any kid growing up in any part of LA would already know. It’s not clear what the writers and filmmakers behind THE CONTRACTOR expect of their audience. Are we supposed to feel that the family and Javier have some kind of bond? Have we never seen a single movie before? We know that Javier is connected to the opening scene somehow. We know from the poster that Danny Trejo is going to end up holding a big fucking knife. (I don’t think he actually does, disappointingly enough.) Even if we can’t figure that out on our own, the overactive musical score constantly tells us something’s supposed to be wrong. 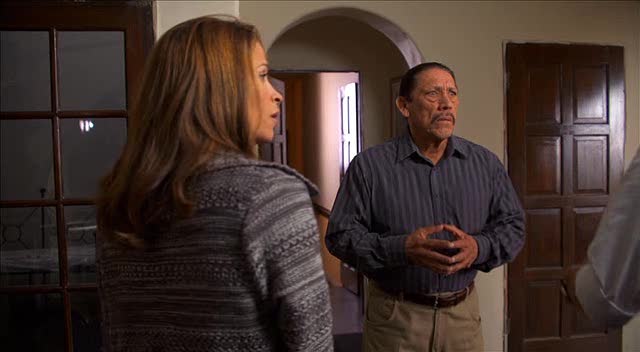 One question THE CONTRACTOR never considers: What if I think the Chase family are dull idiots and I’d actually enjoy watching Danny Trejo mess up their collective day? Surely making this suggestion exposes a few of my own personal biases, but I think I can live with that. I like where I’m sitting on this particular matter. 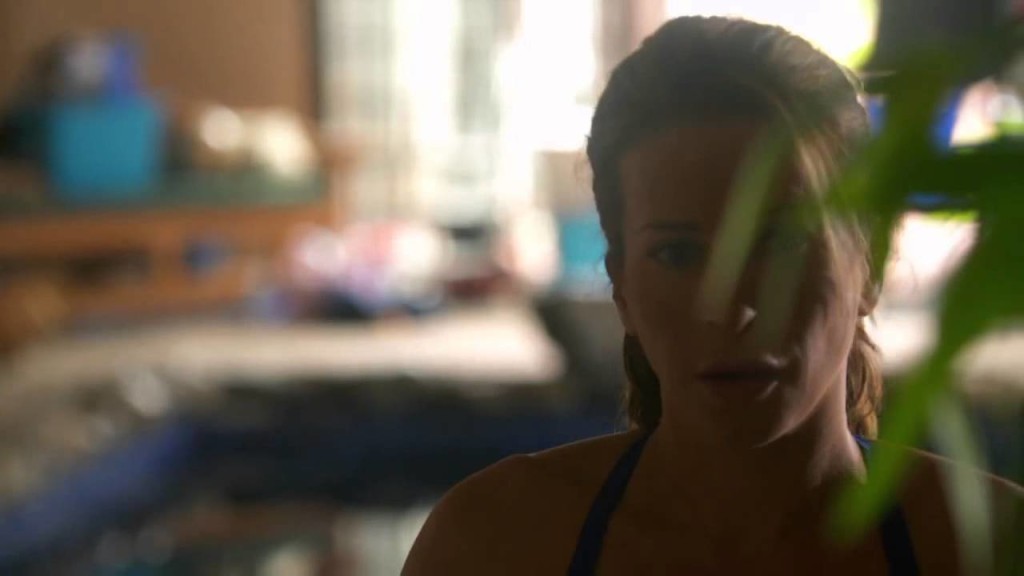 There is absolutely no glorious cinematic Danny Trejo carnage here for Danny Trejo fans to revel in. Javier’s campaign of subterfuge, once inside the doors of the Chase family home, is tame even by the standards of Kevin McAllister. Here are some of the unprecedentedly evil deeds Javier commits: He watches Liz do yoga. He doctors Paul’s telephone bill. He makes a fake restaurant receipt and slips it into the laundry, the first of several oblique acts of mischief which somehow convince Liz that Paul is having an affair. He manages to get a picture of Paul’s pretty secretary massaging his neck, which confirms the affair in Liz’s eyes. Unfortunately, since the audience knows Paul isn’t having an affair, the fact that Liz keeps becoming more and more convinced that he is having an affair makes her seem more and more stupid. And it isn’t as if any of these characters started off the movie with crackling dialogue to make them seem like great 21st-century wits to begin with. Our nominal heroes are dimbulbs and the supposed villain remains the most likable character in the piece, if only because he’s been such a welcome presence in so many more interesting movies for so long.

Without any suspense generated through effective script-writing or atmospheric filmmaking, THE CONTRACTOR basically relies on its star to provide the menace, and that’s unforgivably misreckoned. Danny Trejo is modern cinema’s uber-Mexican — his persona is rooted in his ethnicity.  He’s like a Mexican Charles Bronson, but he’s unavoidably Mexican. Again, the premise of the story is: day laborer torments wealthy attorney. That has class warfare written into it. My point is, all of the above said, the choice to make the poor Mexican guy into the villain in this day and age is totally insane. Were this a better-made film, I’d be a lot angrier. I don’t think the people who made this movie even realize how stupid and racist their movie is. Sure, it’s not an active kind of racism. It’s racism born out of ineptitude. That’s still racism, which is always unwelcome, but since we’re Americans and we have to deal with this kind of shit all the time I guess this’d have to be strictly B-grade racism. I mean, who even knows this movie exists besides maniacs like me? 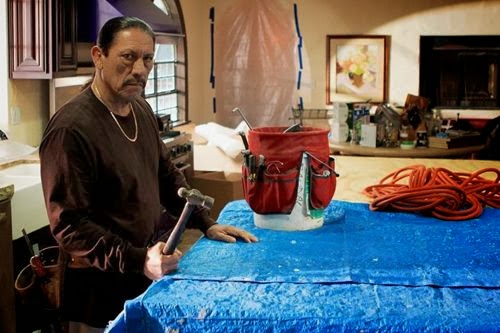 Still, it presents an interesting thought exercise: How might I have fixed THE CONTRACTOR? Well, I wouldn’t have made THE CONTRACTOR. That’s the easiest fix. But assuming I couldn’t prevent it, here’s another suggestion: Make Danny Trejo the good guy. Someone’s following the family, and they still suspect him, but he’s actually there to protect them. Deal with the upper-class prejudices of the main characters, and force them to dismiss those prejudices through cinematic action. Then it’d be almost worth doing. Because as it is, you’ve got a movie where the big climax ends with a rich white woman shooting a seventy-year-old grief-stricken Mexican point-blank in the head on the floor of a stable in Malibu, and call me crazy, but I ain’t cheering for that shit.