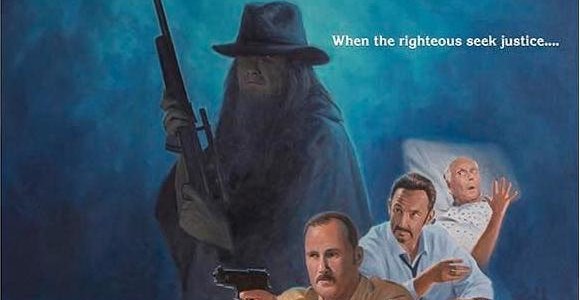 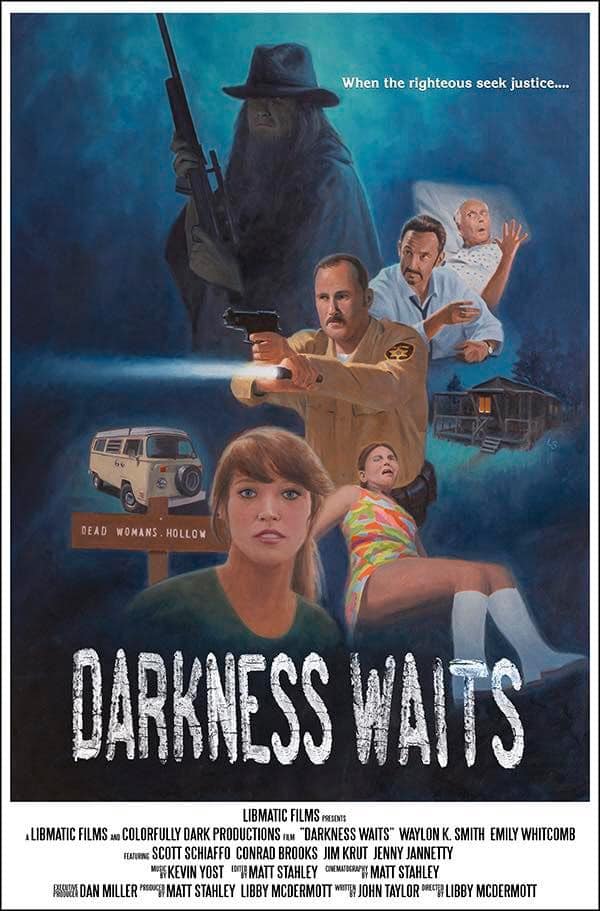 Which is to say, the difference between the two flicks in terms of quality is enormous. While McDermott showed a keen eye for shot composition, and screenwriter John Taylor came up with some interesting characters, there were a lot of things in DEAD WOMAN’S HOLLOW that were just a mess. The amount of improvements shown in DARKNESS WAITS is pretty incredible. It’s about as good as microbudget cinema gets. The acting is solid, the story is more compelling, and McDermott has upped the production value considerably.

Cinematographer Matt Stahley’s drone shots of the mountains and forests of rural Pennsylvania shows us not just of the beauty of the area, but the isolation, the desolation of it all. There’s something very primal about the immensity of nature, which cares nothing about the fate of man. It’s the perfect setting for a movie about a stealth gunman who is picking off teenagers and cops one by one.

The film begins with a credit sequence in the style of a ’70s grindhouse flick. There’s all this grainy footage of teenagers in the woods near Waynesboro, Pennsylvania whose lives are about to end quite violently. This is the “found footage” section of the film — footage that five college students are watching on TV in the present day. We learn that the girls in the ’70s footage were picked off by a killer with a .22 rifle. Who is this mystery man? Nobody knows, but Jess (Emily Whitcomb), the leader of the group of college kids, is convinced that there’s something supernatural going on, especially since the killings have been taking place off and on for 100 years. And so, with a little persuasion, she convinces the four others in the group, another girl and three boys, to do a sort of faux-reality show for some sort of mass communication class that they’re taking. With a little convincing, the others agree. As you might imagine, not everyone is going to leave the woods alive.

We find out soon enough that the killer isn’t a ghost, since we see him several times and he’s unmistakably a real flesh-n-blood guy, but what of the whole hundred-year rampage thing? The guy is human, but he’s also a kind of spectre, an archetype, a myth. As an audience, we’re trained to believe – especially in genre film — that all mysteries will be solved at the end of ninety minutes. But no explanation is given here, which is hard to take on an existential level. I think leaving things a mystery wreaks havoc on our sense of justice. And that right there is some scary shit.

And I think a gun fired from some anonymous position is far creepier than someone with a butcher knife chopping someone to pieces. Cutting someone up at least involves some sort of emotion (usually). What we have instead is something cold, anonymous, dispassionate. There’s no reasoning this away. It’s just random violence that any of us might be susceptible to if we walk the wrong path on the wrong day.

Adding to the story’s verisimilitude, the FX and makeup are pretty out of sight. And as far as I can tell, everything — save the gunshot flashes — are practical, which always warms my heart a bit. Of particular note is a cringe-inducing tongue-removal scene where the camera doesn’t turn away, so we get to see each gruesome, meaty slice of the knife. Big props to Donnie Drumm and Troy Smith, the two credited special effects artists. Really great gross stuff.

Emily Whitcomb, who plays the leader of the group of college kids who make the fateful trip into the woods, is a very dynamic personality, and whenever she’s on screen she commands attention. I hope we’ll see more of her work in the future.

Waylon Smith is back as Buck Rogers. (Nice!) A sheriff’s deputy in DEAD WOMAN’S HOLLOW, in this film he’s been promoted to sheriff on a provisional basis. Smith definitely feels more confident in his performance here, which is good, since his character is a bit more understated this time, whereas before he was almost entirely comic relief.

Charles Dawson plays the previous sheriff, now a kooky loner obsessed with tracking the mysterious killer woodsman. His performance has improved immensely since DEAD WOMAN’S HOLLOW, which makes me wonder if McDermott maybe got a better handle on directing actors between the two films. She was originally an actor, after all. Anyway, the performances are really solid here, even among the locals that McDermott recruited to basically play themselves.

Libby McDermott has done a lot with what was surely a minuscule budget. The movie’s not as polished as it maybe could have been, but genre fans are very forgiving about that sort of thing, especially those of us who enjoy no-budget stuff. John Taylor’s script is lean and doesn’t meander. There are some chilling kills, some lighter moments, and some great characters. All this is to say that DARKNESS WAITS does almost everything right, and it’s definitely worth checking out. 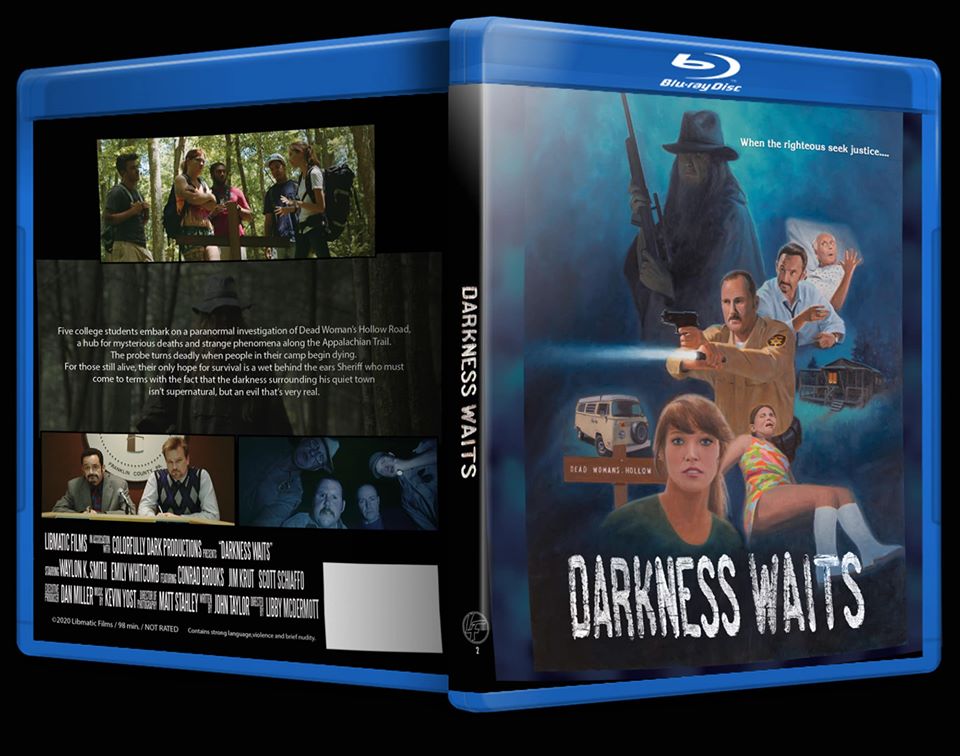