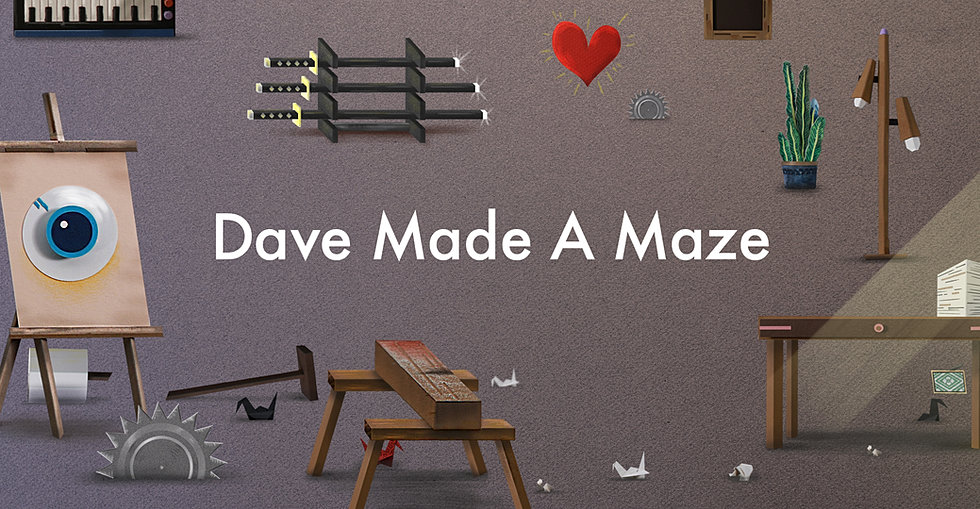 Many filmmakers are intent on pursuing the feelings and experiences they had when they were children. Whether it’s in massive projects (STAR WARS, GUARDIANS OF THE GALAXY, SUPER 8, etc.) or even in smaller indies, artists wish to replicate that sense of awe and wonder they felt in their formative ages. For many, this means using nostalgia and references as the fast track to activating those sensations; copying over specific story beats and tropes from their earliest filmgoing experiences to evoke and leech off what has come before. Therefore it’s very impressive and refreshing when a movie breaks through to instill that childhood wonder without leaning on these superficial aspects. DAVE MADE A MAZE is a great excursion into a child-like environment of entertaining and creation that creates a whole fantastic world on its own that is brimming with brilliant visuals, delightful humor, and a real sense of wonder. Its flaws are on the slight character development and lack of emotional hooks, but it greatly succeeds in birthing a world that feels new and fantastic.

DAVE MADE A MAZE (directed by Bill Watterson, written by Watterson and Steven Sears) begins pretty much out of the gate when Annie (Meera Rohit Kumbhani) comes home to discover her boyfriend Dave (Nick Thune) has built and now entombed within a cardboard fort in their living room. After Dave emphasizes that he is lost and that it is treacherous to pursue him, Annie and a bunch of their friends (and a film crew) embark into the labyrinthine fort to retrieve Dave. Along the way they find impossible creations, sentient pieces of origami, and real dangers as various members of the party are killed off. Can they all escape the maze intact? And what of the impending danger of the Minotaur that haunts the halls of this arts-and-crafts dungeon?

It simply cannot be overstated how brilliantly the production and art design departments were able to accomplish on a small budget. The layout of the rooms feel incredibly real and lived in, there’s a weight to the cardboard and how the crew is able to transform it into impressive images that will linger with audiences. Watterson has accomplished what few other directors have in executing this lo-fi world of wonder that is at once enchanting yet also oddly ominous with danger. It’s reminiscent of the work Michel Gondry has done in THE SCIENCE OF SLEEP and MOOD INDIGO, by using the tools of childhood to render real the dreams of adults. The film plays out like a slacker indie adaptation of a grown up Calvin & Hobbes comic strip, but with more blood (well, confetti and streamers) and probably more cursing.

The humor is great, with lots of idiosyncratic moments and dialogue that strikes as being weird but not forced; this is authentic whimsy from a group of people that seem delighted to be undergoing this death-defying adventure. Kumbhani is great as Annie goes along with the jokes while remaining focused, but never dipping into the “adult scold” or shrewish figure that just wishes Dave to grow up. James Urbaniak, Frank Caeti, and Scott Narver particularly shine as the indie documentary crew that is following everything; it adds a nice slice of increased absurdity to the proceedings and also offers a chance to mock independent documentary clichés. Since audiences are with these characters for 95% of the scenes, it’s important that they are all fun and engaging roles that seem like real people, albeit ones that are taking this fantastic turn of events very much in stride. 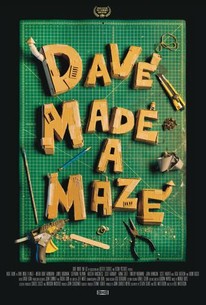 The only weakness to DAVE MADE A MAZE is that there seems to be a lack of depth when it comes to the central Dave and Annie relationship, and there doesn’t seem to be much in the way of an emotional arc for any of the characters. There is a scene where it feels like the writers/director hint at the issues facing the couple, but it is done rather abstractly and late within the film. Perhaps a few added scenes of the two together before the maze would better flesh out their dynamic and thus bring the audience more into the store emotionally.

DAVE MADE A MAZE will probably never be a giant hit—in a land of billion dollar properties and major studios, it will be forever edged out to the “weird kids'” table. But that’s fitting as that is who will most identify with and appreciate this tale of an artist who can’t see things through, or a creation that becomes unwieldy. Watterson and company have created a delightful, if slight, movie that is pleasant and refreshing. Hopefully it will be discovered by audiences and gain its own cult following. The filmmakers have truly created a gateway to a world of imagination without ever leaning on tired tropes, and for that they should all be commended. There are worse ways to get lost for 80 minutes, and audiences may be surprised how the film blossoms in their mind afterward, spurring them on to their own incredible projects.

Special thanks to Other Worlds Austin for hosting the screening.

For those interested in seeing the film, DAVE MADE A MAZE will be in select theaters August 18-24 and also available on most VOD platforms on August 18.