Chicago is hands down one of the greatest cities there is, and if you are involved in the horror community there is always an awesome event going on. Whether it’s an art opening, live theater, a movie marathon, or a book reading…there is always something for a fan of the horror genre to do in Chicago. Above all, I would have to say we have the best horror conventions in the country.

Standing head and shoulders above the rest of the horror conventions is the DAYS OF THE DEAD: CHICAGO being held at the the Chicago Schaumburg Marriott. I’ve been going to DAYS OF THE DEAD: CHICAGO since it began, and I’ve seen it grow every year and become more kick ass. I’ve met many of my favorite actors, directors, genre celebrities, and partied really fucking hard! This year is going to be no exception. Some of the guests include Gary Pullin (artist RUE MORGUE MAGAZINE) Felissa Rose (SLEEPAWAY CAMP), Caroline Williams and bill Johnson (TEXAS CHAINSAW MASSACRE 2) Tony Todd (CANDYMAN) who is doing an exclusive photo-op in costume, Ric Flair (Wrestling legend), Ray Park (STAR WARS EPISODE I: PHANTOM MENACE), and the almighty shock rock legend Alice mother fucking Cooper! Besides all the amazing guests and photo ops there is a tattoo contest, a costume contest, movie marathon, a dance party, and so much more.
With the excitement over DAYS OF THE DEAD: CHICAGO 2016, November 18th to the 20th, right around the corner, I wanted a chance to sit down and talk to the head honcho in charge of all the madness, Adolfo Dorta. DAILY GRINDHOUSE: What made you want to get into the horror convention game? How did Days of the Dead start?
Adolfo Dorta: Aside from DAYS OF THE DEAD, I also run a website called From Dusk Till Con (along with co-founder, Rick Lara) which covers the horror convention scene and culture behind it and has been growing quite steadily since its inception on Halloween of 2009. Originally, DAYS OF THE DEAD was going to be the mid west expansion show for one of the long established horror conventions on the east coast (which I am not at liberty to name) and they approached FROM DUSK TILL CON about sponsoring an event for that show. A few months later, the original promoter changed his mind and Rick and I were offered the opportunity to take their place as a partner and the face of what went on to become DAYS OF THE DEAD. As huge horror fans who go to about 4-7 horror conventions a year, it was an offer we simply couldn’t refuse. 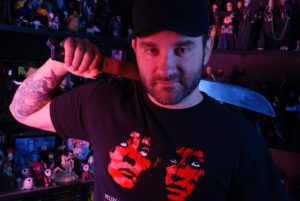 DG: Who was the first guest you booked, and how did it make you feel to get that first contract back and signed?
AD: I had to do a bit of digging for the answer to that one, but as it turns out it was Gary Busey and Zoe Bell. So apparently we were choosing to live dangerously from the very beginning.
Since I have the link up, you can take a trip back in time and see that very first guest announcement by clicking this link:
DG: I’ve seen Days of the Dead grow over the years, there are so many more events besides just the guest, vendors, and panels. Could you tell me about what else goes on at Days of the Dead.
A.D. We’re very much of the mindset that to get the full experience at DAYS OF THE DEAD, you need a whole weekend to take it all in. Aside from the traditional assortment of guests, vendors, and panels, we run film programming all weekend long – 48 hours of non-stop shorts, feature length films, and even cartoons in the morning for your viewing pleasure from the time the doors open on Friday to the time they close on Sunday. We also have some fun special events such as our tattoo contest, an FX and Makeup competition, costume contest, and tons of live entertainment after hours.

DG: There is always a great party vibe at the Days of the Dead convention, and a great sense of camaraderie. Why do you think that is?
AD: A lot of conventions like to say they’re “for the fans” but then run their shows like a trip to McDonalds – you walk in, pick what you want to buy, and get ushered out the door. We genuinely love what we do, we love the people we do it with, and we want to have as much fun as possible while we’re doing it. We really make it a point to encourage our convention as being a social outing and not an autograph show. We strive to be that show where you can come out, make a ton of new friends, and maybe even a few bad decisions.
DG: What is it that sets Days of the Dead apart from other horror conventions.
AD: Piggybacking off the previous question, I think fans can see that we’re genuine enthusiasts of the genre and the culture of what our show represents, much like they are. We love horror and horror conventions and have an immense amount of respect for the fandom behind it and I think that comes off pretty clearly. We don’t treat our show like a cash grab and we don’t make it about the bottom line. At the end of the day, we run DAYS OF THE DEAD like a big family reunion that happens in various cities across the country, and that lends to a much more friendly and enjoyable atmosphere. I’ve been going to conventions for over 20 years and I’ve never seen anything like it. It’s pretty special. 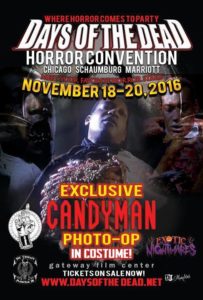 DG: I see that Days of the Dead is spreading across America.  That is an incredible accomplishment. How did that come about?
AD: Right after we did the first Indianapolis show in 2011, a friend of ours at the time told us we should do a show in Atlanta and set us up with some contacts in the area. On a whim we decided to pursue it and 8 months later we were having a show in Atlanta. A few weeks before the Atlanta show happened, we got a very good offer to do a show in Chicago (which is the area many of us are from), and so we went on to announce our first Chicago show the weekend of Atlanta. We swore we were done and would never add another show, but then a good opportunity presented itself in Los Angeles and…..well……that became our fourth show. And at the risk of sounding like a broken record, we were definitely never going to do a fifth show……and then a very lucrative offer came through for Louisville. I’d say that there’s no way we’d ever do a sixth show, but then I almost feel like I’d jinx us if I said that.
DG: Besides horror movie actors, director, and other genre icons, you’ve also included musicians and professional wrestlers to the guest line up. Have you gotten any backlash from the horror community over this?
AD: There’s always a handful of individuals that trip over themselves to point out who is and isn’t “horror,” or to tell you that you’ve ruined an otherwise great guest list by booking a wrestler or musician on the show – they’re always welcome to skip that person’s table or even stay home. Aside from watching tons of horror movies, we grew up watching wrestling, and listening to metal, and being STAR WARS nerds, as did many other people that come to our convention. It keeps things fresh, it keeps things different, and despite the bellyaching of a very small group of individuals, the crossover guests usually tend to have the longest lines of people wanting to meet them.
DG: What is the future of Days of the Dead?
A.D. Hopefully to keep growing each show year after year. Five years and twenty shows have gone by pretty fast with barely a chance to catch our breaths. But it’s been a great run and we feel we’re only just scratching the surface.

DG: Anything else you would like to add?
AD: We’re going to be ending our year in Chicago this November 18th – 20th @ the Chicago Marriott Schaumburg, with special guests Alice Cooper, Shannon Elizabeth, Ray Park, Ric Flair, Judge Reinhold, C.J. Graham, Tony Todd, and many more! Folks are definitely not gonna wanna miss this one. They can get more info at Days of the Dead
DAYS OF THE DEAD: CHICAGO 2016, will be held at the Schaumburg Marriott from November 18th through November 20th.

Tags: Conventions, Days Of The Dead