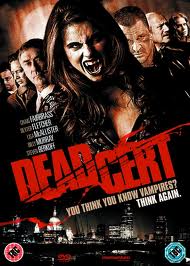 This flick hit Cannes a few months back and we just got word from SHOUT! Factory that they are dropping this on Blu/DVD on 9/27. Directed by Steve Lawson, from a script by Ben Shillito, DEAD CERT is set in London, but not fancy pants swank London. This one is dark, cold, and run by the mob who open a nightclub called the Inferno, which is built on land once owned by bloodsuckers. Never a good idea. I haven’t seen this yet but I am guessing bloody mayhem ensues.

Here is the skinny from SHOUT! Factory

OWN IT ON BLU-RAY™ and DVD

This Fall, get ready for a bloodthirsty mix of From Dusk Till Dawn and Lock, Stock and Two Smoking Barrels when  Dead Cert debuts for the first time in the U.S and Canada on Blu-ray™ and DVD September 27, 2011 from Shout! Factory, in association with Black and Blue Films. Jam-packed with all the ingredients of both a vampire flick and a gangster film — creepy monsters, scantily-clad women, tough-talking wise guys, gratuitous bloodshed and a seemingly crazy vampire hunter, Dead Cert features a star-studded cast of familiar British acting talent including Craig Fairbrass (The Bank Job), Dexter Fletcher (Kick-Ass), Billy Murray (Rise Of The Footsoldier), Lisa McAllister (Pumpkinhead: Ashes to Ashes), Steven Berkoff (The Girl With the Dragon Tattoo), Dave Legeno (Harry Potter And The Half-Blood Prince), Jason Flemying (X-Men: First Class) and Danny Dyer (Dead Man Running).

Produced by horror specialists Black and Blue Films and directed by Steve Lawson, Dead Cert marks a welcome return to the fun, almost-traditional British horror filmmaking style that affectionately evokes the spirit of the contemporary-set movies of Amicus and Hammer — particularly the latter’s Dracula A.D. 1972 and The Satanic Rites of Dracula.

Dead Cert is a bloodsucking feast with more bite than most and one that horror fans will definitely enjoy sinking their teeth into.  (Blu-ray, $24.99 SRP / DVD, $19.97 SRP)

When respected but small-time gangster Freddie ‘Dead Cert’ Frankham (Craig Fairbrass) is unexpectedly given the chance to make a tentative leap into the big leagues with the opening of his new nightclub in London’s East End, he doesn’t quite realize what he’s getting into. Unknown to Freddie and his partners, the club stands on the former site of a Black Church, established as a temple of evil in the 17th Century by a Romanian warlord-turned-vampire known as The Wolf. Flushed out of the city by emissaries of the Vatican during the Great Fire of London, and since then exiled in mainland Europe, The Wolf and his undead disciples have now returned to England to continue their diabolical plans to expand their legions and overcome mankind.

On the club’s opening night, Freddie is approached by an uninvited guest in the form of Dante Livienko (Billy Murray), an Eastern European businessman, gangster and drug-dealer with a fearsome reputation. Livienko and his associates want ownership of the club and are prepared to make Freddie an offer he can’t refuse in order to get what they want. But to Freddie, his new, legitimate business means far more to him than money and he’s not about to give up his hard-earned turf without a fight. What he doesn’t know, but is soon to find out, is the man he is about to cross is a 500-year-old vampire determined to rebuild his empire of evil on its original, unhallowed site.

Executive produced by Will Horn and Steve Lawson

Written by Ben Shilito and Jonathan Sothcott, based on an idea by Garry Charles

Special features are not rated