I love genre cinema. I will always have a soft spot for horror, action, sci-fi, and all the subgenres that exist inside those larger categories. What I have never felt any real connection to are those films that exist in the realm of pure sleaze. You know the ones: the films from the ’70s and ’80s, filled with ugly violence and sex that is the opposite of titillating, usually shot on cheap film stock with semi-amateur casts. But knowing these films have a large following and several companies devoted to restoring them makes me wonder what I am missing. With that in mind, I am going to do a deep dive into the world of sleazy exploitation. This is My Exploitation Education. This week’s entry is DEAD HOUSE.

Any halfway knowledgeable fan of horror films knows there is a long tradition of Italian filmmakers cranking out zombie movies but using casting, English dubbing, and non-descript locations in an effort to convince viewers that the movies actually take place in America or England. In the ’70s and ’80s, this was done because it was believed that American grindhouse audiences (and later VHS gorehounds) were unwilling to watch a foreign film. I am not sure if this belief had any validity, but that is how things were done. But given that audiences for all genres have become accepting of the idea of international productions (although some people still do have issues with subtitles), it is odd to see a modern film like DEAD HOUSE adhere to the legacy of those old Italian zombie flicks. Trying to set the film in some sort of mish mash of European cultures where half the characters sound like they stepped off the set of a Guy Ritchie tough guy crime comedy while sporting Italian names is unnecessarily distracting. The film itself already has enough tonal issues to overcome without adding on that extra baggage.

Looking back over the films I’ve written about for this column, I find that I largely veered away from the hardcore exploitation entries that are the exercises in “ugly violence and sex that is the opposite of titillating” (LAST HOUSE ON DEAD END STREET being the unrepentantly sleazy exception) that I refer to in the introduction to each entry. A common complaint I have had about many of the films that I’ve watched is that they are too restrained when they should be going for the jugular. I cannot say that DEAD HOUSE is restrained. It starts out ugly, violent, and rapey and only gets more so as it goes along. 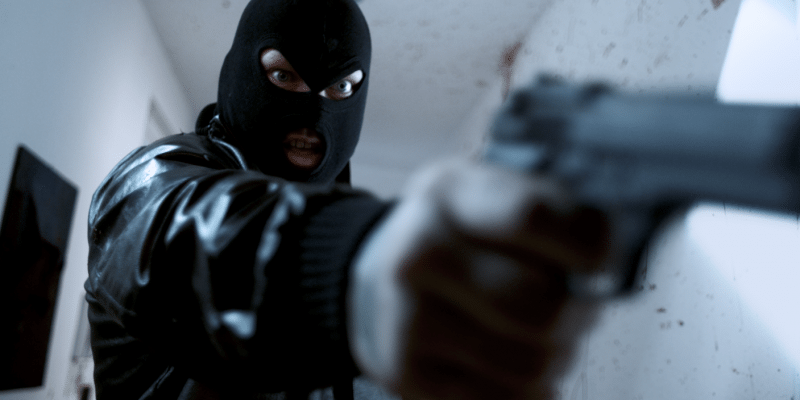 Nibbio (Danny Cutler), Testamento (Alex Lucchesi), and Brett (Alex Southern) are a trio of violent thugs who break into nice homes, physically and mentally torture the people who live there, and film all the degrading things they make their victims do before killing them. The thugs justify this behavior by seeing themselves as class warriors touched by God to make the rich and powerful pay for their sins. Of course, in actuality, they are just nasty, horrible pieces of shit who get their kicks raping and killing.

After an honestly shocking opening sequence shows the violent, upsetting end to the thugs’ latest home invasion, the story proper gets moving with the introduction of the next intended family of victims. But while they appear to be a normal, upper middle class family, husband and father John (David White) is actually a shady scientist working on a top-secret project in the basement. Since I mentioned Italian zombie films earlier (given the DVD cover image, this is not a spoiler), you can probably guess what he is hiding and what happens when the thugs search the house. 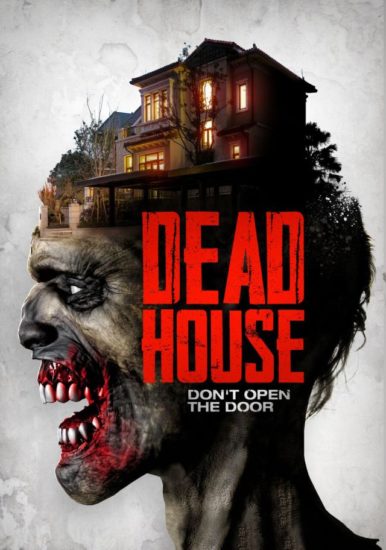 There is real potential with DEAD HOUSE. The premise of turning zombies loose on some truly reprehensible home invasion villains is a good one. But director Brini Amerigo (working from a screenplay by Andrea Cavaletto) lets the film get too bogged down in the sadistic nature of Nibbio and Testamento as they torture John and his family for an interminably long sequence. Considering Amerigo already presented an abbreviated version of this same scenario in the opening, it is unnecessary and slows the movie down when it should be ramping up to the promise of zombies munching down on the bad guys.

When the zombies versus scumbags action finally hits, DEAD HOUSE does take off into some loopy, delirious directions. Amerigo and Cavaletto make the smart choice to present John and his family as less than wholesome which makes them easier to root for since they come off as actual human beings instead of just generic victims. In particular, John takes drastic measures to get revenge on Nibbio, which leads to the most welcome, ridiculous twist in the movie. 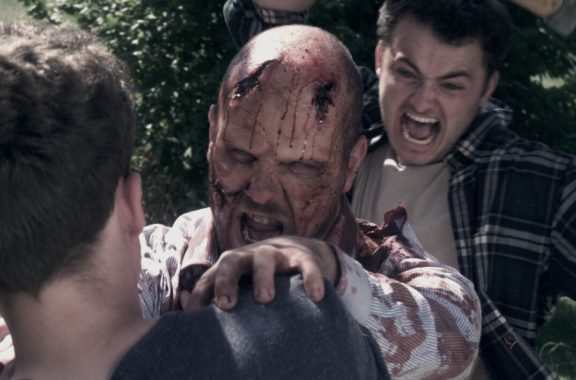 Unfortunately, the zombie movie portion only lasts about fifteen minutes before the filmmakers go for a climax and resolution that can only be described as over-the-top nihilism. Even worse, the nihilism is completely unearned with a character doing an unexplained 180 degree turn to pure evil and one of the cheapest (and therefore ineffective) attempts at a shocking twist I have seen trotted out in a while. Where the home invasion and zombie genres actually meshed together fairly seamlessly, the final ten minutes of DEAD HOUSE feel like they were grafted on from a completely different movie.

Despite all of my misgivings about the film, I cannot deny that it delivers the exploitation goods. The gore is copious and appears to have all been done with well-executed practical effects. The opening sequence actually is shocking and transgressive in the way that grindhouse crowds are often promised by the marketing, but is rarely delivered. The zombie makeups are traditional but have a nice level of craft to them and there are plenty of intestines being ripped out as they feed.

If only the filmmakers had not lost their damn minds with the ending, I might be recommending DEAD HOUSE. But between the protracted, redundant home invasion in the second act and the completely unearned finale, there are just too many missteps here to completely forgive.