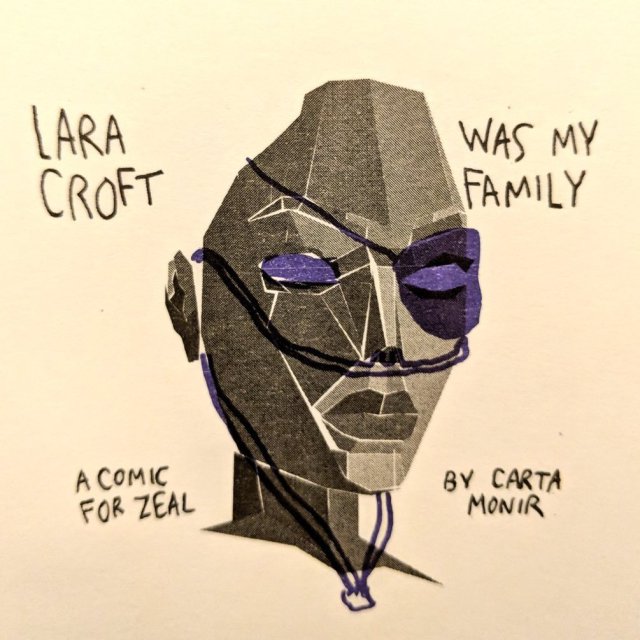 When you can construct a fully-formed, emotionally resonant, deeply poignant comics memoir in just 40 pages, you’re probably an extraordinary cartoonist. When you can do it in 40 panels? Then take a well-deserved bow, because you’re downright otherworldly.

Now, before you mention it, rest assured that I’m fully aware that it’s considered bad form for a critic to “give away the game” in the opening paragraph of a review like I just did, but fuck it — Carta Monir doesn’t mess around in Lara Croft Was My Family, and I intend to follow her lead. To that end, I’m going to be uncharacteristically short, sweet, and to the point here, because this is a work that seems to demand exactly that sort of analysis, given that it’s deliberately structured (and magnificently, at that) to achieve maximum impact with minimal bells and whistles — but please don’t take that to mean that Monir’s brevity is employed in service of a quick, hard, punch to the gut. That would be far too easy, and the very nature of this comics makes it abundantly clear that nothing about its creation was “easy.” 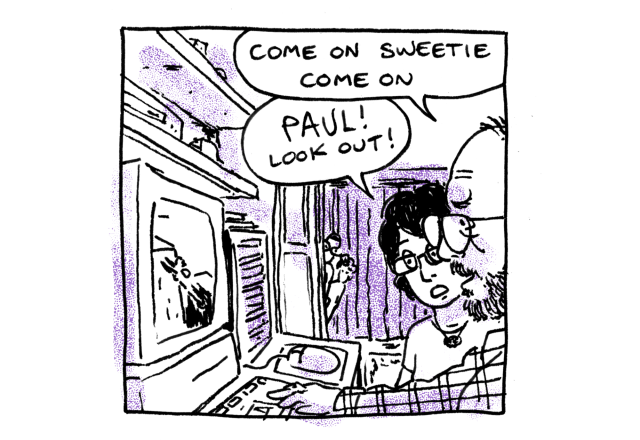 So, if this isn’t a visceral and immediate work, what sort of work is it? Believe it or not, while it’s direct and earnest in the extreme, it’s actually remarkably subtle in terms of the complex and even contradictory emotional responses it engenders in readers, telling a tale that touches on issues of emotional abuse, parental mortality, gender dysphoria, and yes, good (okay, not so good) old-fashioned family dysfunction by means of a strung-together series of rapid-fire memories that cover a number of years in, as we’ve already established, a small number of visually-pleasing panels that stress an economy of linework in the same way that the story stresses an economy of dialogue.

Monir’s family had an unusual bonding ritual, to put it mildly — they hovered around Carta’s father, Paul, and he played Tomb Raider — but it’s not like they particularly enjoyed doing so. They just did it. And, for a time, it provided a respite from the old man’s constant and withering criticism. How constant and how withering, you ask? When Carta’s mother was effing dying, “Daddy Dearest” was all over her ass for not trying hard enough to stay alive. And you thought your parents had issues — 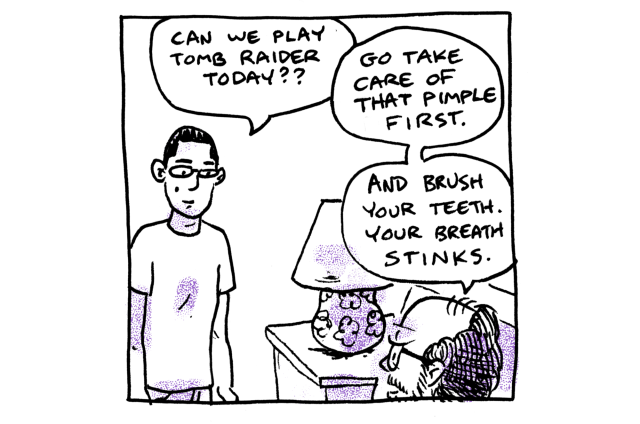 Fortunately, dad’s acerbic nature is contrasted by mom’s warmth and caring, so the kids had at least one decent role model in the house — but after she passes away, a transitioning Carta and her brother have a heart-to-heart that, as you’ve probably already sussed out, communicates a lot even though the two of them say very little. This is raw, honest, unvarnished stuff that is in no way easy to read — so I can only imagine what committing it to the page (to say nothing of actually living through it) must have been like. That being said, at least mom and Lara Croft (specifically, mom imitating — and channeling her inner — Lara Croft) provide a quiet template for the kids to look to in order to assure their emotional survival, and the story ends on something of an “upbeat” note — but it’s one tempered by the pain of alienation, of abuse, and especially of loss. Monir doesn’t wallop you over the head with any of this, but the expertly-chosen vignettes that chart her family’s history don’t require a heavy hand, instead realizing that real power lies in burrowing away in the reader’s mind and lingering there for a hell of a long time afterwards. Forget cartooning “lessons” — Monir puts on a veritable clinic here. 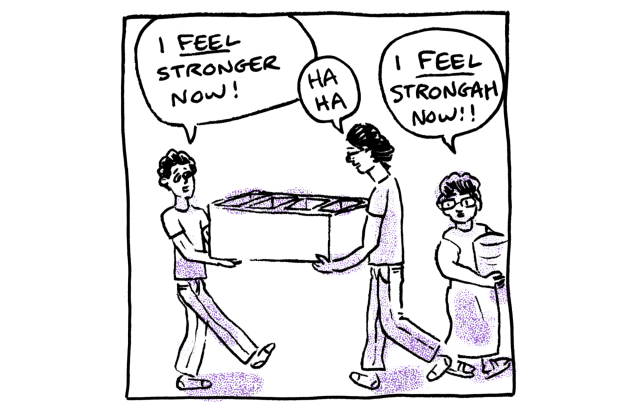 In a sure sign that, hey, maybe all is not lost in the world after all, Lara Croft Was My Family has gotten a lot of positive “buzz,” and was even awarded the 2018 Ignatz for Outstanding Webcomic. Monir produced a small riso-printed version of it in advance of SPX (and trust me, the dimensions of this ‘zine put the “mini” back in “mini-comic”), which I jumped on quick but is now already sold out, but fear not — it’s still available for you to experience in its entirety for free online, and you’d be very foolish indeed not to do precisely that. Just follow this handy link and prepare yourself for one of the absolute best comics you’ll read this year: