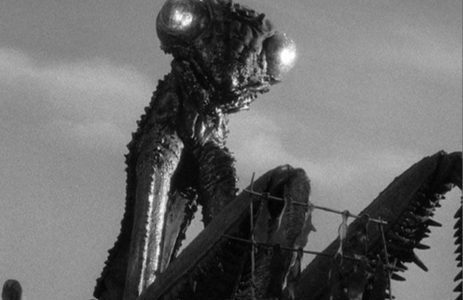 I love giant monster movies. The first “scary” movie I watched as a kid was the 1976 version of KING KONG, and it made a major impression on me then. I know KING KONG isn’t actually considered a “scary” film by most, but to six-year-old me, the very thought of a large gorilla rampaging through New York filled me with fear. Every time I saw that cover in the video store, the small voice in my head that protected me from things would tell me it was a horror movie and would give me nightmares. I mean, what would I possibly be able to do in the face of something like that? Other than run, of course. But, I decided to try on bravery for a bit in front of my dad one weekend, and nervously declared that I wanted to watch it. He agreed (probably grateful I didn’t want to watch THE CARE BEARS MOVIE again for the 100th time), and we rented my first monster movie.

I loved it. I remember still being scared of Kong on the island, but heartbroken when he met his untimely demise at the base of The World Trade Center (again, 1976 version). It introduced a new range of emotions into the “rampaging giant beast” scenario for me. I had already prepared for fear, panic, anger, and hate to well up in my underdeveloped child mind when faced with the beast. I had no idea I would feel those about the men trying to take it down, and I certainly never thought I would feel sadness or sympathy for the monster.

But I did. Because KING KONG showed a wild creature being taken from his home and shoved into a world he doesn’t know. Shackled and scared, his only option was to do what my only option would be if I were in the jungle. He chose to run. To get away from all of the noise and chaos of New York City. To be free again, and do what he was born to do. What nature urged him to do. Kong was not to blame for the rampage that was depicted on the VHS cover. That image that told me I’d be scared if I watched this because it was about a murderous monster ape destroying a bunch of frail, defenseless humans like myself was a lie. That cover wasn’t a depiction of terror. It was a portrait of a tragedy.

After that day, I watched every giant monster movie that came my way, starting with the original KING KONG and plowing forward through films featuring the magic of Ray Harryhausen creations, Japanese Kaiju, and a bunch of ‘50s and ‘60s drive-in fodder. It seemed like, at one point or another, every type of animal you could think of had a growth spurt and headed for the closest landmark to let out their frustrations. 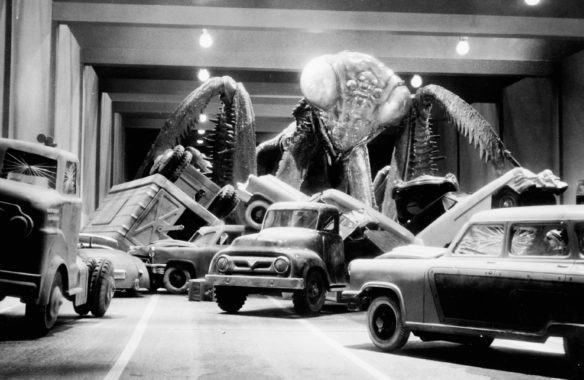 Today, one of those lesser known behemoths makes its way to blu-ray, thanks to the fine folks at Shout Factory. Prepare to flee in panic, because here comes THE DEADLY MANTIS!

Released in 1957, THE DEADLY MANTIS is a relic from another age. It starts near Antarctica, showing a volcano erupting. A narrator says Newton’s third law (every action has an opposite and equal reaction), and we’re shown the other side of the globe, where sheets of Arctic ice are breaking up. In those chunks of broken ice, we see the frozen body of a gigantic praying mantis as the opening credits start up.

This opening has already shown the level of scientific understanding this film will be working on. It’s a total misunderstanding of Newton’s third law, but if you can just roll with it, you’ll be fine with anything else in here that would make Neil DeGrasse Tyson head to Twitter on a debunking spree.

After the opening credits, there is an overly long sequence explaining the northern radar defenses of the U.S., accompanied with stock footage of these operations. It’s probably the bit I’d cut if I was in a position to do so, because it really just serves as a complicated introduction to a remote northern station where a strange object is detected on the radar screen, confusing the tiny crew stationed there. The baffled operators aren’t baffled for long, because they are soon to be the first victims of the recently thawed terror from the pre-credits sequence, setting off a series of confrontations that move ever southward towards the cities and high populations of the United States. 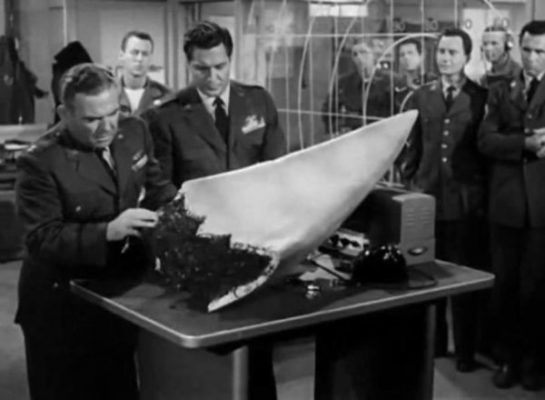 Overall, THE DEADLY MANTIS moves at a brisk pace, considering the era, and I really only felt like the stock footage intro was a slog to get through. Stock footage scenes have always been the thing I dislike about this corner of filmdom, though, so I might be more critical of this than others. The special effects are a bit clunky, but they have the ‘gee whiz’ charm that comes with the territory. Attacks are mostly either shown from the creature’s POV, with a shadow cast over the soon to be victims, or with the use of large puppets. There are no amazing Harryhausen-style stop motion shots here, but I still applaud them for using an actual mantis crawling over models sparingly. The rampage is why you’re watching, and the film gives you plenty of black and white carnage to enjoy. It’s not near the level of CGI-enhanced destruction we get in our blockbusters nowadays, but you knew that going in.

While THE DEADLY MANTIS is not the best of the giant creature features, it’s also not one of the worst, and I enjoyed my re-watch–especially since it wasn’t interrupted by personal injury attorney commercials like it was when I caught I as a kid on some UHF channel as a late night movie. 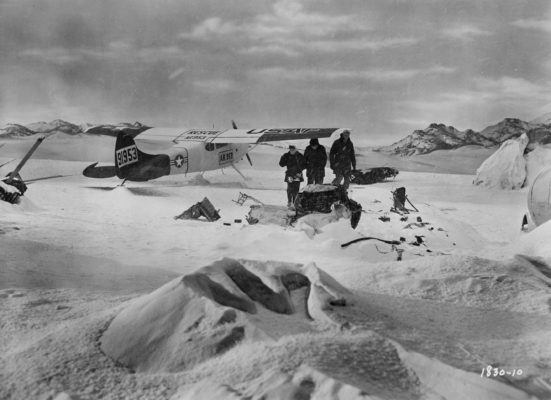 Shout Factory has made big business out of treating overlooked films with great care and respect, and THE DEADLY MANTIS is no different. The film looks and sounds better than ever, due in no small part to a new 2K scan of the original film elements. Also included on the disc is the original theatrical trailer, a commentary by film historians Tom Weaver and David Schecter, and an episode of Mystery Science Theater 3000 featuring the film. There is also a stills gallery presented in a slideshow format.

This set is yet another home run from Shout Factory, and deserves a place on the shelf of any fan of giant monsters or ‘50s sci-fi. I really hope they continue to bring these neglected atomic age genre films out of cheap print obscurity and give them a chance to shine in the spotlight once more.

THE DEADLY MANTIS is now available on Blu-ray from Shout Factory. 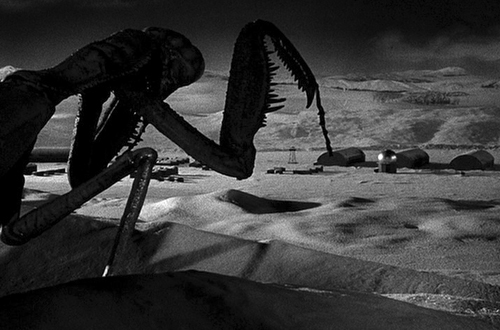