Generally speaking, zombie apocalypse movies don’t do much for me anymore these days. Especially American zombie films. Thank goodness DAWNING OF THE DEAD is at least a British zombie film. That alone makes it a bit more tolerable. Zombie apocalypse films are a dime a dozen these days. For me, there really has to be something special for them to stand out from the crowd. Whether it’s excessive gore, a strong sociopolitical subtext, or a totally original spin on the genre, something has to raise the bar to be noticed. 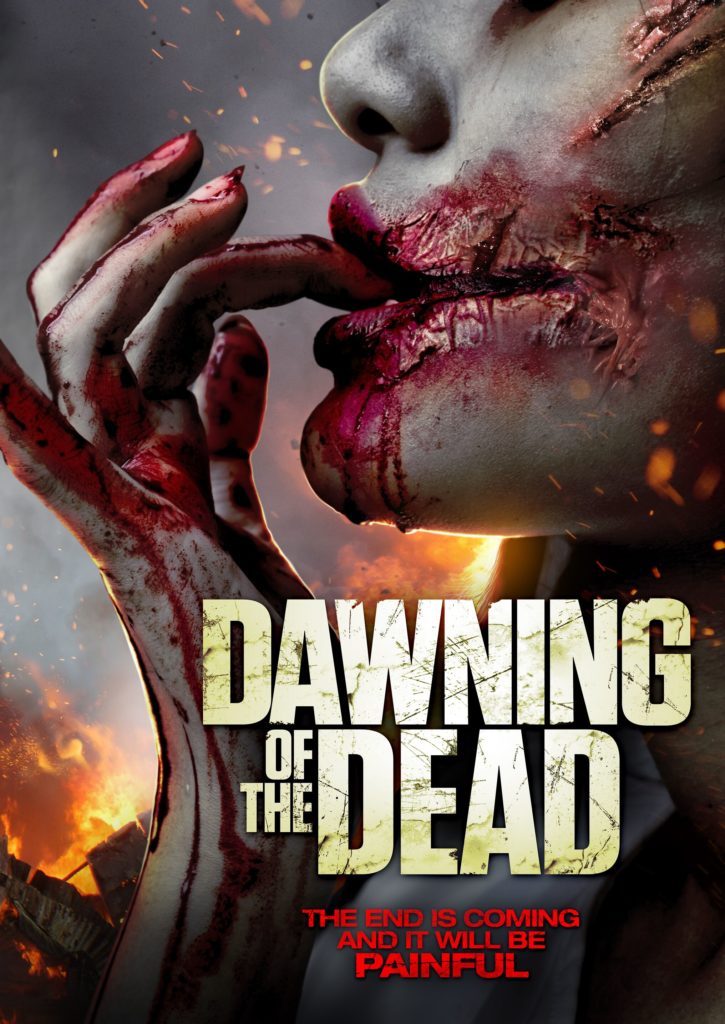 At the start of DAWNING OF THE DEAD, a virus that brings the dead back to life has been unleashed onto the world. The scientist responsible for its discovery, Professor Greg Laborde (Ian Saynor), relays information over to the only person he trusts, a distressed war-correspondent-turned-anchorwoman, Katya Nevin (Ruth Galliers). 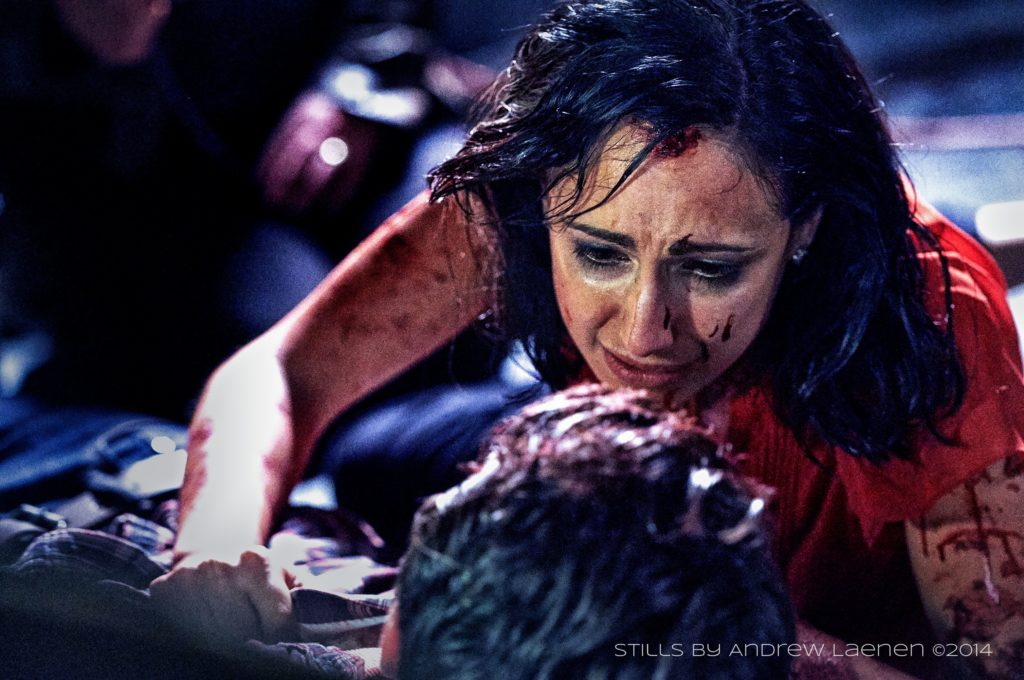 While Katya and her crew witness the downfall of civilization via newsfeeds from around the world, deadly terrorist Agent Proteus (Leo Gregory) makes his way up to her office to silence her. Katya must find it within herself to overcome her own self-doubt and lead her co-workers to safety. 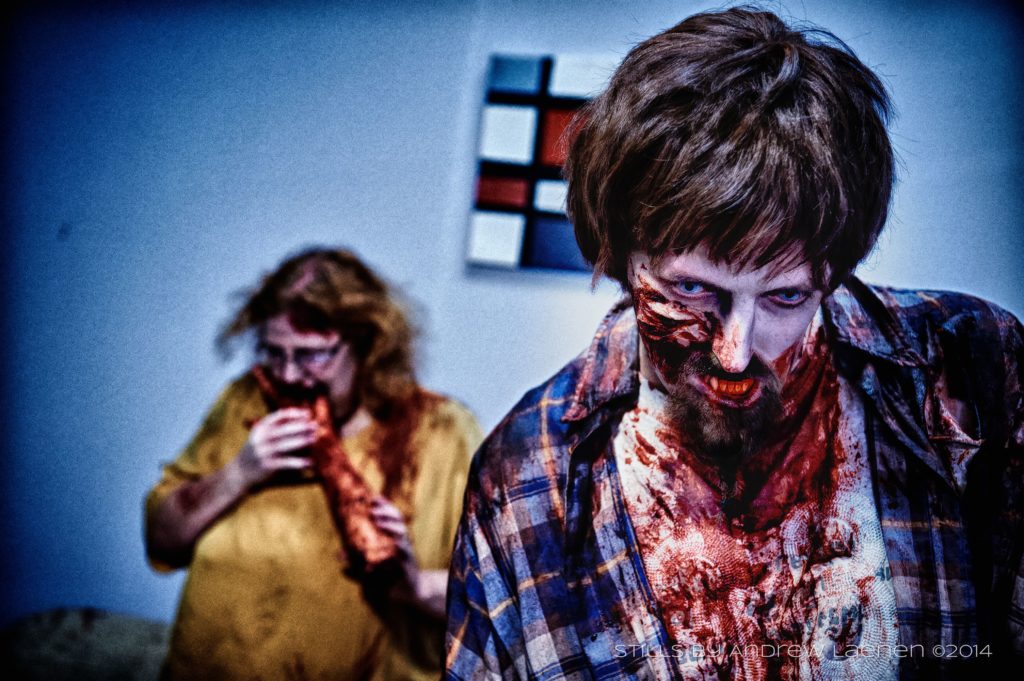 DAWNING OF THE DEAD opens with what looks like a rape/revenge scene, and I’m so glad that doesn’t turn out to be the case. For my money, there really is no reason for any horror movie to include a rape scene ever again, particularly in a zombie film. 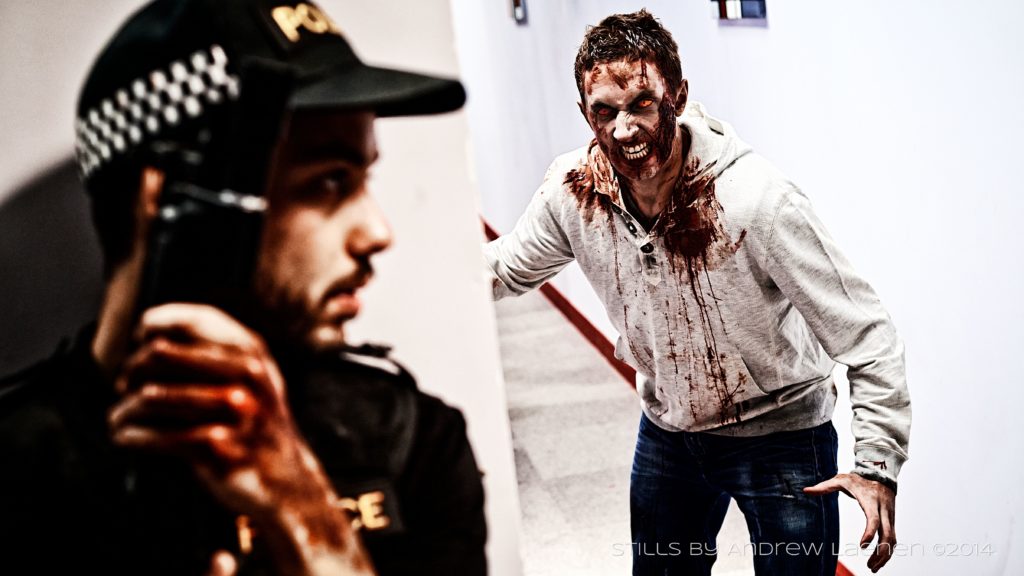 The main story arc of the film is that a terrorist organization has released the zombie virus to create chaos. It’s an intense set-up, and I can dig it. It’s both timely and relevant. DAWNING OF THE DEAD actually fully explains the origins of the zombie outbreak, which I don’t think I have seen many times before. The origin story itself is a nice nod to John Carpenter’s THE THING. Unfortunately, the story gets muddled along the way. There are just too many characters to keep track of here. I never thought I’d say this about a gore flick, but there is too much character development. DAWNING OF THE DEAD isn’t the type of film you watch for the story or for the characters — you watch it for the gore. 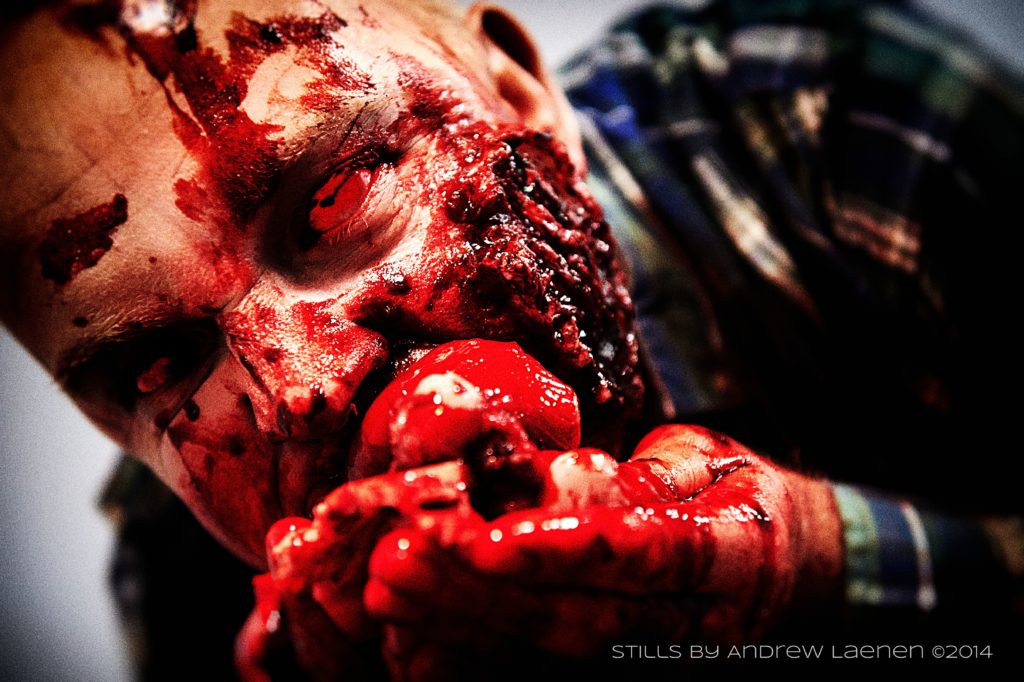 The gore in DAWNING OF THE DEAD is great, mostly practical, and once it starts, things get brutal, with blood and guts galore. It feels like something you might see in an old Lucio Fulci film. The whole film in its best moments is reminiscent of a 1980s Italian gutbuster, although the parts where the blood is enhanced by CGI are probably unnecessary. 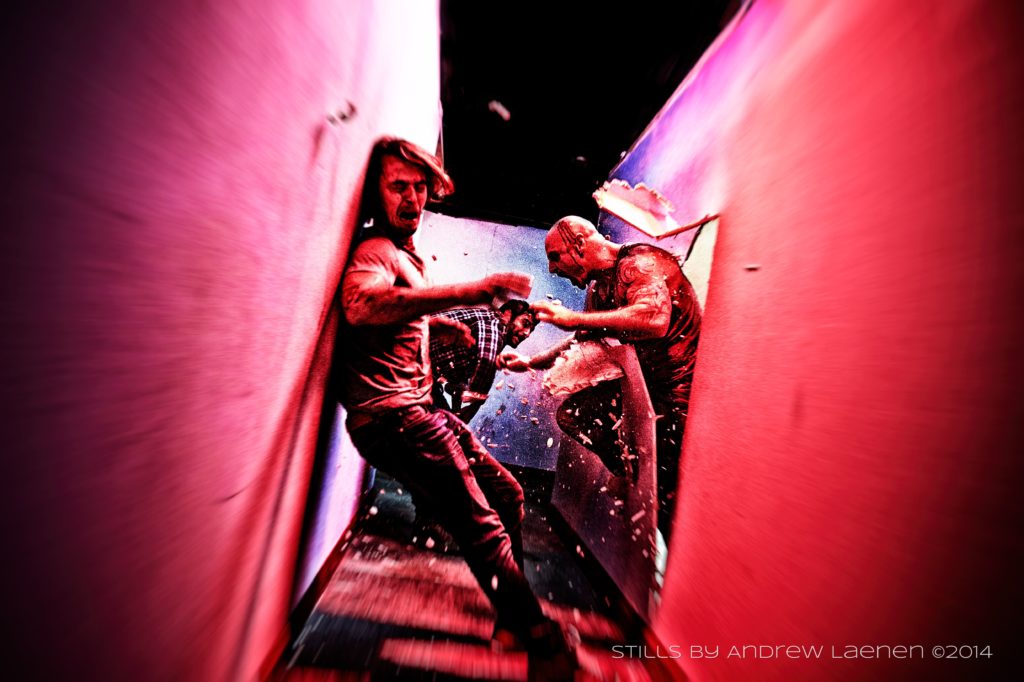 There are multiple attempts comedic moments during the film that could have really helped had they worked, but none of them hit the mark. I feel like if the direction was there, the cast would have been able to make more of this film. The acting wasn’t great, but at the same time, it wasn’t horrible either. I did appreciate the pro-woman and the pro-LGBTQ angles. 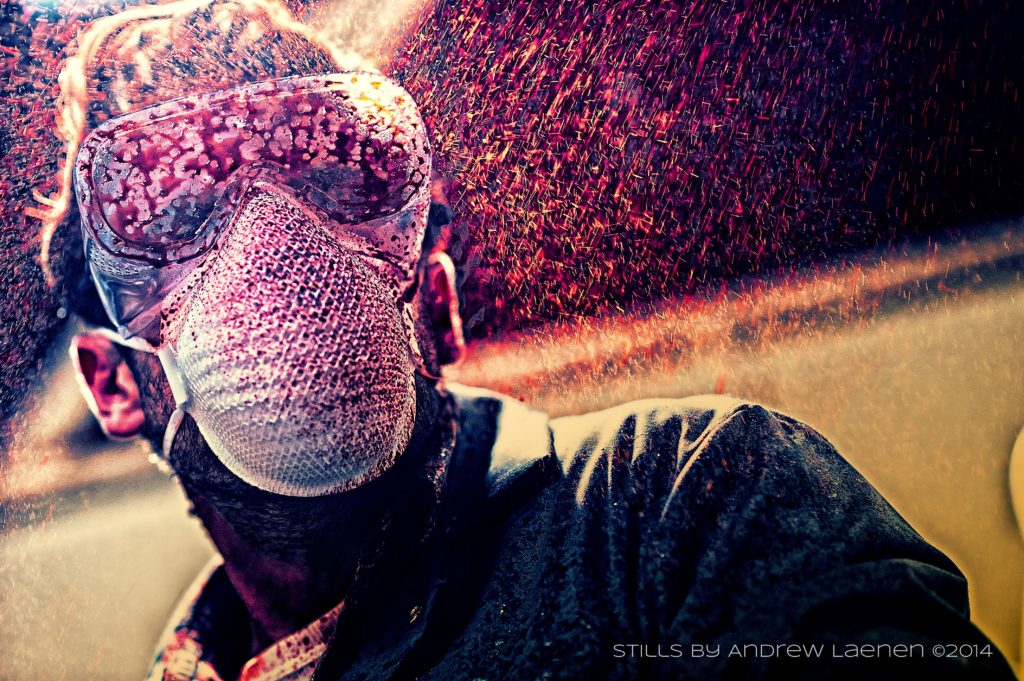 If you enjoy gory zombie movies, then you’ll like DAWNING OF THE DEAD. There is even a mass zombie-killing scene that reminded me of the lawnmower scene in DEAD ALIVE, high praise for aficionados of the genre. I don’t want to give away too much, but don’t look for a happy ending with this one. It’s pretty bleak, and I like it that way. 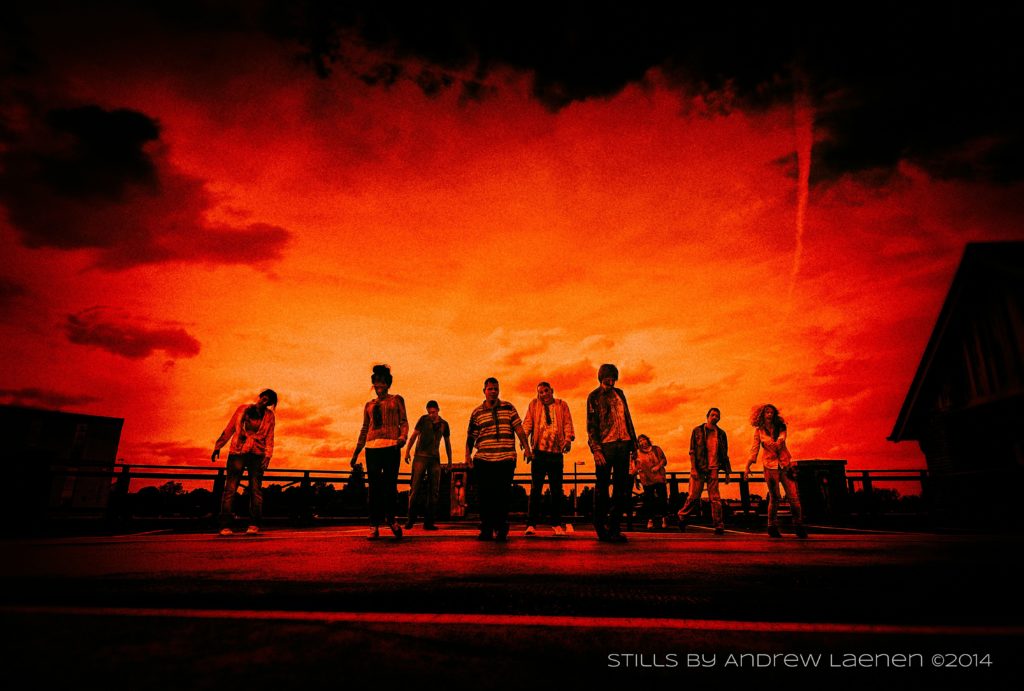