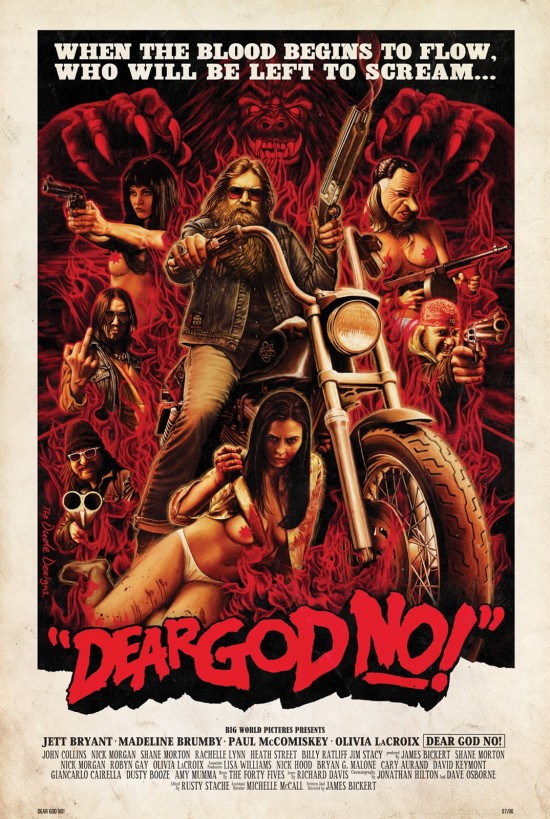 After a ten year hiatus James Bickert has returned to filmmaking. It’s not a subtle return, he’s not slowly opening the door and quietly announcing his presence; he’s kicking down the door, guns blazing, taking no prisoners, and conquering the world. DEAR GOD NO! is an unapologetic homage to classic grindhouse cinema. It walks along the jagged edge of outlaw filmmaking, walking with a brooding strut through bikesploitation, sexploitation, man-in-suit, and other genres that exploitation aficionados are going to pick up and salute. Grab your cut and get ready to roll, because DEAR GOD NO! is ready to punch your eyeballs with a fistful of cool. 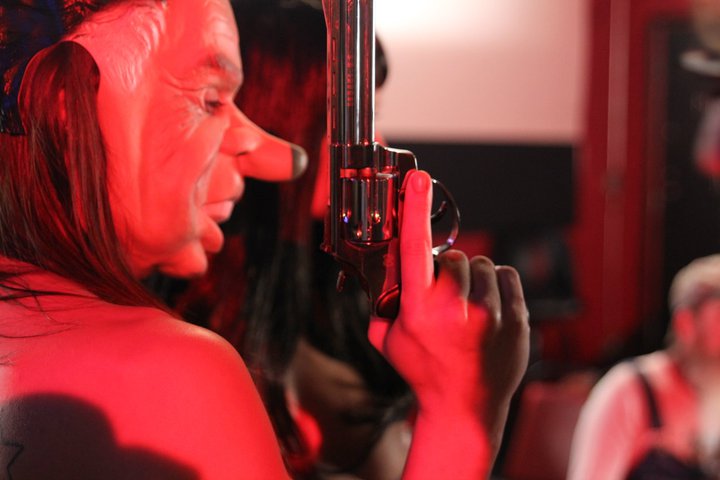 The Impalers are a badass MC and they are here for sole purpose of fucking, drinking, doping, and killing… and not necessarily in that order. To prove that point and drive home some psycoholic cool, the film opens just after this group of dirty bastards have raped and killed a group of nuns. As if that wasn’t enough to grab a ticket to hell, one of the bikers decides to do the Holy Christ of all burnouts on the stomach of a kind sister until her guts shoot out across an otherwise clean greenspace. Dig that shit? ‘Cause we’re just getting started. The rolling rampage of carnage continues for another 75min with extended strip teases, impromptu abortions, and enough boom-slang to intimidate Steve McQueen. 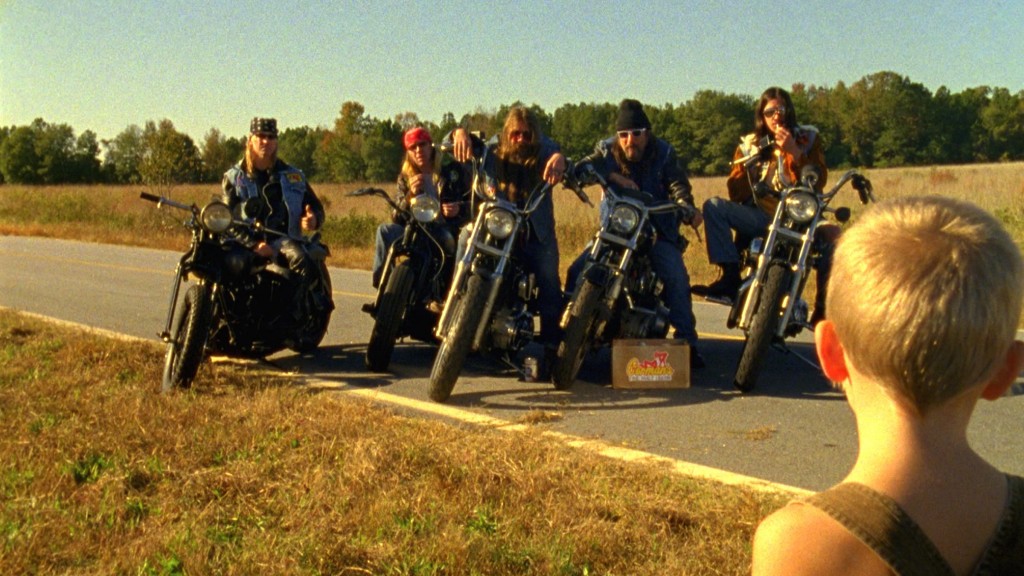 I could ramble here about plot, I could walk you through the horror-show but half the fun is seeing where this fucker goes. Bickert has a created a film that embraces the very best of grindhouse cinema. It doesn’t just play like an homage; it plays like a vintage genre film. It’s what made DEAD HOOKER IN A TRUNK such a cool film; pay respect to the past but don’t let it define you. Bickert gets it. The directing is smooth and in true exploitation tradition, the plot is somewhat chaotic and random but you’re not coming here for the fine narrative work. You’re grabbing this bad boy for titts and blood and the shelves are stocked high with both. 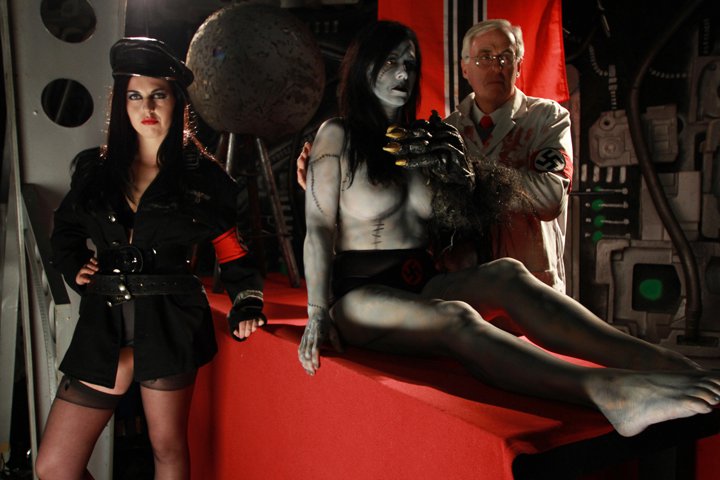 Like the plot, discussion of acting has no place when talking about films like this. It’s the story and the group of characters that get you off. However, I do want to mention Jett Bryant who plays… yup… Jett, the leader of the MC that wrecks all kinds of hell on whoever is in their way. The dude is a natural in this type of rock and roll flick. With a voice that sounds like he is gurgling glass and a wicked attitude that could kick Billy Jack’s ass, Bryant deserves another swing as Jett. He has a crazy amount of talent behind that Grizzly Adams beard. 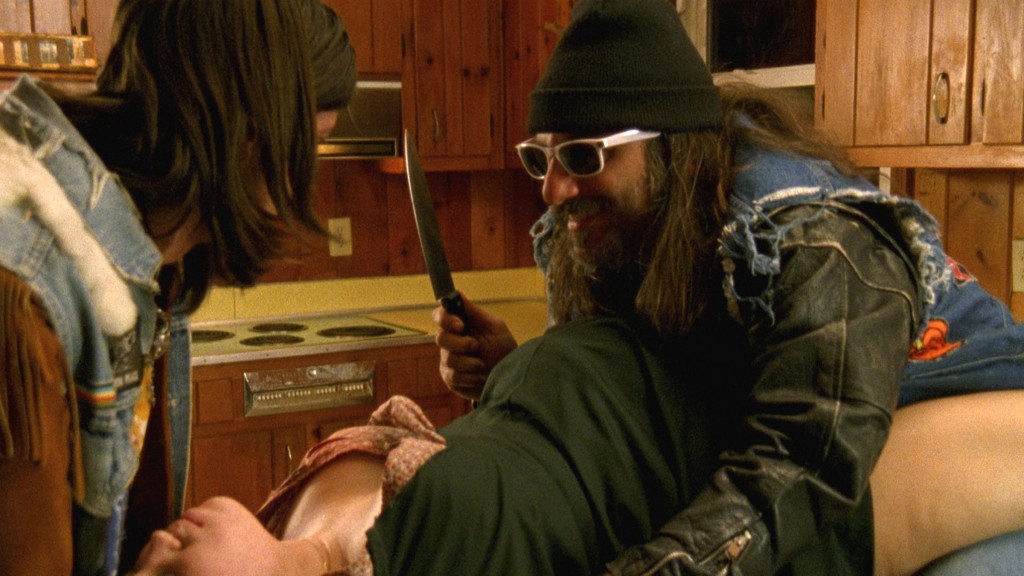 DEAR GOD NO! is a flick best served with a shot of rye. It really doesn’t care what you think, it just wants you to know its dick is bigger than yours… and it is. This was made by a group of guys who have a love of exploitation filmmaking. It doesn’t take too much imagination to see this playing at a drive-in after THE WILD ANGELS or NORTHVILLE CEMETARY MASSACRE. This is a customized ’67 Electra Glide coming at you fast in your rearview before you’re swarmed with rebel rousing ass-kickers forcing you off the blacktop. This is a 12 miles of bad road. This is DEAR GOD NO! and you need to see this good shit.

DEAR GOD NO! is currently seeking stateside distribution. We’ll keep you updated on when a distributor does the good deed and picks this bastard up.

For more on James Bickert and DEAR GOD NO! Click here!