After I am done practicing my kung fu, I like to kick back with a bottle of whiskey, two hot dames to finger my chest hair, and a film that has both death and promises. Color me happy as fuck to find DEATH PROMISE (1977) chilling on my shelf, begging me to watch the sole directorial effort from famed production supervisor (?) Robert Warmflash (he actually has an impressive resume but I don’t want that to interrupt my skeaze).

This badass joint of crazy stars Charles Bonet (no relation to Lisa) as Charley Roman, Tony Liu as Master Ying, and Speedy Leacock as the deadly Speedy Leacock. Okay, names aren’t important, Jack. What is important is that fists meet faces on a regular basis and after a slow start that’s exactly what you get in large, poorly filmed quantities. This is a basic revenge movie with a desperate plea for the rights of tenants across this great land of ours and serves as an important message often lost on renters today: Kung-fu solves problems, so does murder.

Pick this one up, you won’t be disappointed. I DEATH PROMISE it. 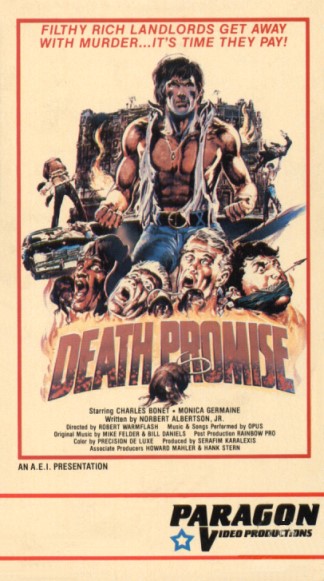