Angela Mao kicks an ungodly amount of ass, simple as that. Doesn’t matter how big you think you are or how deep your crew is, she could go through you and your boys and leave each one of’ya bloodied and bashed. DEEP THRUST (aka LADY WHIRLWIND) is a cool little flick that is soaked in revenge. Mao plays Miss Tien, a feisty chick who is focused on taking down a dude a who is responsible for the death of her sister. Typical right? Where this joint gets crazy though is when Miss Tien partners with the fella to help him battle some gangsters only so that she can get him one on one to settle her score thus satisfying her vengeance. She actually nurses the guy back to health after a thrashing so she can have him nice and healthy when she beats the shit out of him. This flick is just viscous as hell.

Director Feng Huang went on to direct several more films including one called STONER, (aka SHRINE OF ULTIMATE BLISS) with Mao, George Lazenby, and Sammo Hung (part bundle of flicks Lazenby made with Golden Harvest after the death of Bruce Lee) which is worth a watch. STONER was originally going to be the first film to star Bruce Lee and Lazenby, but then (and I am not naming names), someone had to go and die. As cool as DEEP THRUST is, Mao has a couple more titles in her filmography that are visually and technically better, HAPKIDO and BROKEN OATH (the latter being my favorite). She got her start (and a $100 payday) playing the sister of Bruce Lee in ENTER THE DRAGON. You can view the full film here. 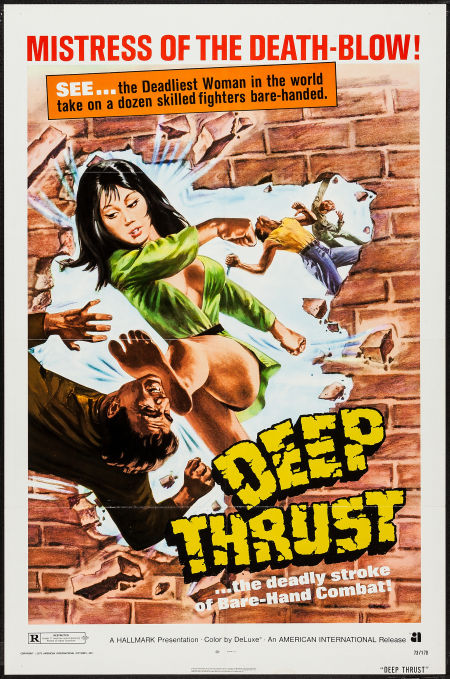