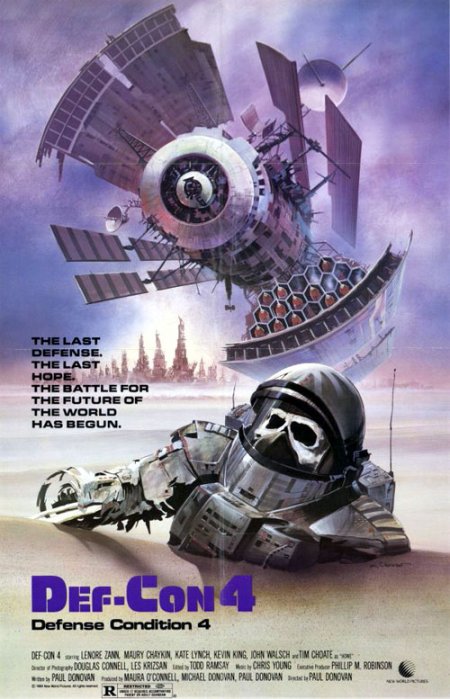 I’ve never considered myself much of a traditionalist. I support decriminalizing all drugs, including heroin and crack. I favor legalizing gay marriage (not that I mean to compare it with drug use, but bear with me as I attempt to illustrate a point here). I’d be cool with lowering the voting age to about 12. I think religion should be taxed like any other money-making enterprise. I feel that the traditionally-defined “family unit” is a hopelessly outmoded construct that’s probably done more harm than good (although what it should, or even could, be replaced with I have no idea). So the supposedly venerable institutions that our society unquestionably relies on to form its rather wobbly backbone are things I’d be perfectly comfortable leaving in the dust. And yet —

Maybe for all my pseudo-radical posturing, I really am just a sucker for the old ways at heart. I say this, friends, because goddamnit, when it comes to post-apocalyptic action flicks, I really do think the tried-and-true set-ups work best. The heroes should be tough as nails and have names to match, like Stryker, Hunter, or Slade. The villains should be barbaric savages with tattoos, facial piercings, Mohawk haircuts, or any combination thereof if they don’t have all three. The women should be sexy, but clearly in possession of enough moxie to get by in the post-nuke wasteland. There should be at least one super-rare commodity that’s valued above all others that everyone is fighting for (water and/or gasoline being the best and most frequent choices). The action should take place in an irradiated desert wasteland (okay, the Australian outback will do in a pinch). And finally, the overall tone of these flicks should be dripping with hilariously absurd levels of way-over-the-top machismo. After all, every character in every one of these ROAD WARRIOR-inspired stories was tough enough to survive being hit by a nuclear fucking missile! This ain’t no place for wimps.

In 1985 though, apparently Canadian filmmaker Paul Donovan (credited in the film as being the sole director although according to the IMDB he had help from a couple others) thought a lot of those old tropes had played themselves out and, together with a couple of screenwriting partners, gave us a decidedly different take on life after the shit hits the fan called DEF-CON 4, a movie that pretty much breaks all the post-nuke rules merely for the sake of doing so (at least I can’t discern any other logic at play here), and ends up being a decidedly mixed bag as a result.

To be sure, things start out promisingly enough — there’s a slick opening credit sequence, complete with stirring and dramatic theme music that would feel right at home in any Hollywood blockbuster, and from there we go to some sort of NORAD-sanctioned orbiting nuclear arsenal designed to — uhhmmm — protect the world with its payload of heavy-duty atomic warheads, staffed by the timid and homesick Howe (Tim Choate), hard-ass commander Walker (John Walsch), and token female crewmember Jordan (Kate Lynch). When some Libyan terrorists obtain some nukes of their own that don’t end up going off (or something like that), though, it’s too late as the US has already decided to strike a bunch of Soviet cities (the film is set, according to its opening scroll, “the day after tomorrow,” but today’s “day after tomorrow” ain’t much like yesterday’s given that the Soviet Union no longer exists — I’ll give them points for accurately predicting a future scenario where the US would end up attacking a different country altogether than the one that had supposedly “threatened” it, though) and those dastardly Russkies have emptied their missile silos in return. So now our intrepid orbiting crew find themselves in the uncomfortable position of being (I think) the last folks to fire back, and soon a bunch of their own bombs get auto-dropped on the Reds and now they’re hovering in space above a burned-out cinder. And you think you’ve had a rough day at the office.

Fast-forward a couple months and suddenly their ship’s auto-controls kick in out of the blue again and send the craft hurtling down towards Earth, apparently in the direction of the Canadian Maritimes, which according to their own calculations isn’t exactly the best place to be if you want to avoid radioactive fallout. In addition, their remaining warhead payload self-sets itself to go boom in 36 hours, so if the crash doesn’t kill them, then their own cargo surely will in pretty short order, thus leaving us with the two-pronged question of “will our heroes survive, and if so for how long?” I’m happy to answer the first part of that question right now — they do, in fact, survive. And that’s where the problems start. 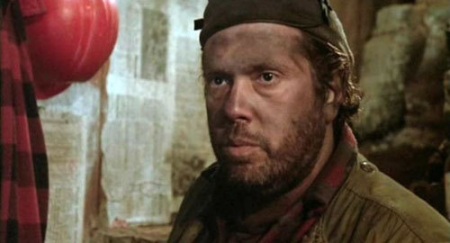 While the opening “space scenes” are damn-near-amazingly well-done, with good-looking sets, interesting characterization, and well-realized effects acting in concert to further a reasonably involving, if convoluted, plot, once DEF-CON 4 (the name comes from the abbreviation for “Defense Condition 4,” the highest state of warning for an imminent nuclear attack in old Cold War-era military lingo, in case you were wondering) gets down to Earth, it’s pretty much all downhill, both for the characters and the audience.

Walker is the first to go, attacked and presumably killed by unseen assailants the second he opens the ship’s hatch, thus leaving us with the rather lackluster duo of Howe and Jordan from here on out — and since Jordan’s knocked out cold it’s gonna be Howe we’re stuck with at least for the foreseeable future. He’s lucky enough to survive an initial encounter with some hostile natives (who look pretty much just like you and me only scruffier and filthier), although his insanely high wimp factor is on full display when he starts offering them at least half the food in his ship right off the bat. He’s “rescued” from this apparently dire situation by one Vinny (veteran Canadian character actor Maury Chaykin, the only cast member on hand to turn in anything like a reasonably involving and/or entertaining performance), a Kilt-wearing survivalist who apparently knows the woods like the back of his hand and immediately asks Howe about the color of fellow crew member Jordan’s areolae. Lame-ass that he is, of course, Howe ends up volunteering both the — uhhhmmm — information Vinny’s after, as well as more than half his ship’s food. Guess he just can’t wait to give the shit away.

Moving right along, then, once imprisoned at Vinny’s cabin, Howe finds our (apparently) Scottish perv is keeping a youngish (even though the actress playing her, one Lenore Zann, looks to be about 35) prep-school girl (she’s still got the jacket and everything) named J.J. imprisoned in his cellar. Together they effect an escape, but soon find themselves in the clutches of another dastardly horde of woodland marauders who operate out of the remnants of the local military base. And here’s where we really double down on the lameness.

So far we’ve had a limp and ineffectual hero traipsing from one situation he’s on the verge of fucking up to another — not in an arid desert, mind you, but in a lush and beautiful Canadian forest. That’s a recipe for a pretty harebrained post-apocalyptic thriller right there, in my book. But once we learn that the local armed encampment isn’t run by some military strongman or bloodthirsty mohawked savage but is instead under the command of an effete and immature 17-year-old kid named Gideon who apparently was able to take charge of the operation because his dad, now deceased, was a rich military general with a private helicopter and fast cars and a fancy house, we’ve lost all credibility in a film that, let’s be honest, is operating within a genre that didn’t exactly pride itself on tremendous degrees of said commodity to begin with. Maybe it’s just wishful thinking on my part, but I doubt that kind of line-of-succession nepotism would continue in a harsh and brutal post-apocalyptic world, even if the Bush family somehow survived intact, and just to ratchet up the absurdity to an even greater degree, it turns out that Gideon is J.J.’s ex-boyfriend, he’s still carrying a torch for her, and if he can’t have her, then he’s going to kill her and everyone she knows!

If this is all starting to sound like some sort of mash-up between Enzo G. Castellari and John Hughes, you’re not too far off the mark. Needless to say, the only reason at this point that you might wonder whether or not Howe’s going to make it out alive is because he might be even more incompetent in the art of survival than his teenage nemesis. Oh, and somewhere around here is when Jordan turns up alive, there’s talk of a sailboat that can get them all to safety, Gideon determines to have our whole motely crew, which now includes a captured Vinny, hung, and oh yeah, just in case you forgot, the nukes back in the ship are now only hours away from detonating. 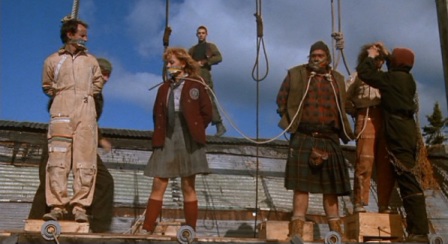 I’ll avoid the temptation to give away the ending too explicitly, but I will say this — any story that concludes by positing that the best way to clean up a lawless, dog-eat-dog, post-Armageddon makeshift “society” is by nuking it again has clearly run out of anything even remotely resembling clever ideas, and only furthers the already-firmly-established-by-this-point idea that Donovan and company (whose Nova Scotia-based production company that they founded to make this mess, Salter Street Films, would go on to give us the likewise-wildly-uneven sci-fi TV series Lexx) pretty much shot their wad, both in terms of budget as well as creativity, in the opening 20-or-so-minutes of this film. If you hit “stop” on your DVD player the minute the orbiter crashes, trust me —you’re doing yourself a big favor. And speaking of DVDs, Def-Con 4, which was originally released by Anchor Bay as a stand-alone title, has recently been reissued by Image Entertainment as part of a post-apocalyptic double-bill along with the equally-absurd-but-frankly-much-more-entertaining “Rowdy” Roddy Piper “starring” vehicle HELL COMES TO FROGTOWN. There are no extras to speak of but the widescreen picture transfer on both films looks like a million bucks and they’ve both been remastered in 5.1 surround sound. You couldn’t ask for a better-quality presentation as far as the technical specs go, but if you want anything beyond that, sorry folks — you’re on your own.

At the end of the day, DEF-CON 4 is as close to a cinematic case study in wasted potential as you’re ever likely to find. An impressive opening third (or so) quickly gives way to a tedious and uninvolving runaround featuring characters that, apart from Vinny the kilted pervert, you all wish woulda died when the missiles started flying. Never has the gap between a film’s poster art (which, let’s face it, is beyond freaking awesome) and its actual on-screen product been so great. Honestly, it’s enough to make you wonder if maybe this whole apocalypse thing just ain’t all it’s cracked up to be after all.