I honestly wish I loved THE DEVIL RIDES OUT as much as the contributors to the special features of this new Scream Factory Blu-ray do. But while I am very impressed by a couple of the film’s more ambitious set-pieces and Christopher Lee’s imposing presence put to good use as a hero for a change, I would be hard-pressed to say that it rises above the middle of Hammer’s horror output in the ’60s, let alone daring to call it one of the studio’s best films as is constantly stated on a new commentary track by Steve Haberman, Constantine Nasr, and Richard Christian Matheson. 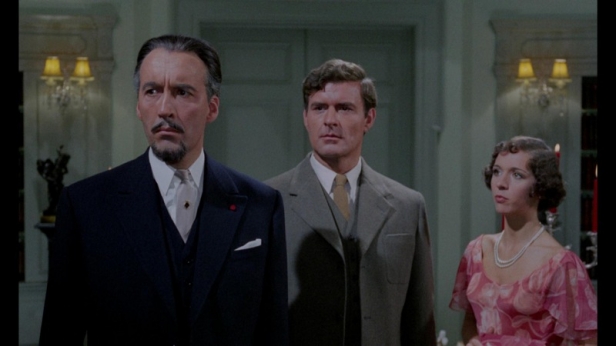 The plot is simple enough, as old friends Duc de Richleau (Lee) and Rex Van Ryn (Leon Greene) meet up for a reunion but are hurt and puzzled by the absence of their younger friend Simon (Patrick Mower). When they go to Simon’s home to investigate, they find him hosting a party and he is definitely not happy to see them. After meeting a few of the other guests—including the lovely, yet strange Tanith (Nike Arrighi) and the smug, urbane, slightly creepy Mocata (Charles Gray)—Simon tries to give Richleau and Rex the bum’s rush out the door. But it does not take long before Richleau determines that Simon has joined up with a group of Satan worshippers who seek to “baptize” him into their cult. Instead of honoring Simon’s wishes to be left alone to do as he pleases, Richleau knocks his friend unconscious and kidnaps him, setting off an escalating war of wills with the powerful and evil Mocata that includes a blood sacrifice, prayers used to alter time and space, and an appearance by the Devil in the form of a goat-headed man. 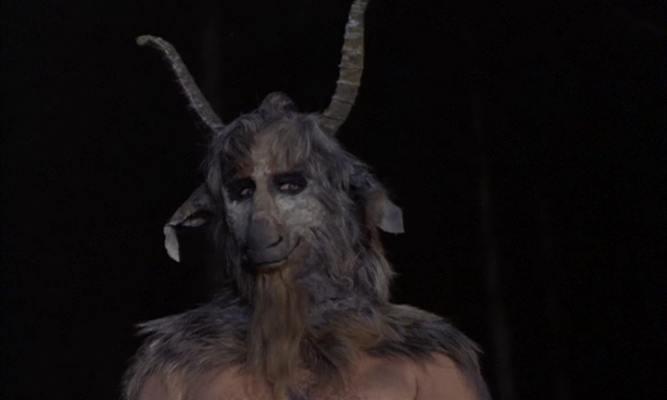 I wish THE DEVIL RIDES OUT was as much fun as that description makes it sound, but is it in actuality a dour, self-serious film that needs more outlandish moments to hold the audience’s attention. That said, it is still a Hammer production, meaning the technical aspects of the film are impeccable (aside from the special effects—more on those later), but the tone and content feels damn near genteel when compared to the edgier genre films coming out of America and Italy at the same time. If nothing else, the film is worth seeing for two wonderfully written and directed sequences that feel imported from a better, more ambitious movie. 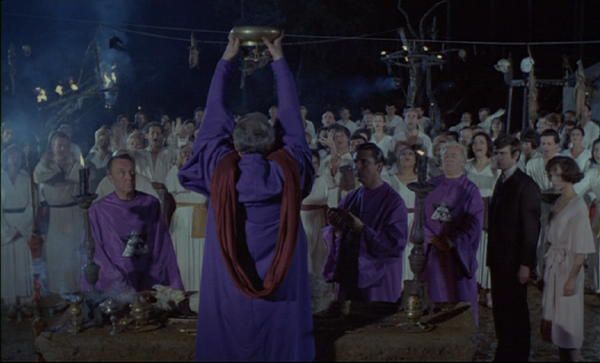 The first sequence takes full advantage of Gray’s smarmy charm as the personification of evil. As he slowly hypnotizes Richleau’s niece Marie (Sarah Lawson) into telling him where Simon and Tanith have been hidden, director Terence Fisher uses subtle camera movement and sudden close-ups of Gray’s face, highlighting his cold, hard eyes to chilling effect. The second sequence is longer and does not make quite as much of an impact, but is still impressive as Richleau, Simon, Marie, and her husband spend a long night trapped in a circle of protection from whatever cursed creature Mocata plans to send their way. Trapped within a tight space, Lee uses his towering frame and voice that commands attention to build hysteria among the group that eventually ends with an appearance by the literal Angel of Death. 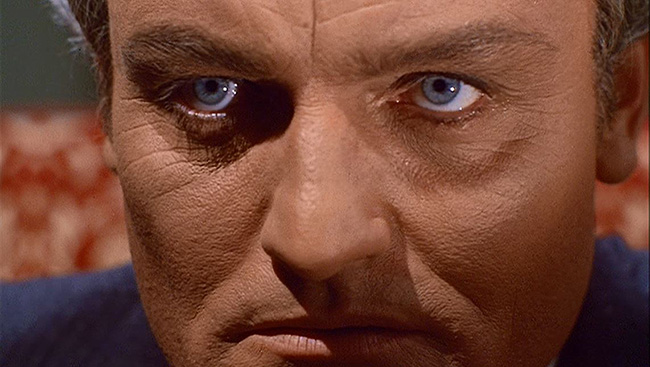 Prolific genre writer Richard Matheson had the unenviable task of hacking Dennis Wheatley’s sprawling novel full of stilted exposition down to a manageable ninety-minute screenplay. Given the circumstances, he probably did the best he could, but the resulting story lurches from one beat to the next, providing little connective tissue between the numerous plot points that have to be hit to allow the film to come even close to making sense. What Matheson does bring is a better ear for dialogue than was found in Wheatley’s novel (seriously, try to read it—it’s nearly impossible) and an outsider’s perspective as an American that alters the tone in the way the ridiculous aristocratic wealth and fussiness about manners is something to be gently parodied instead of being admired. 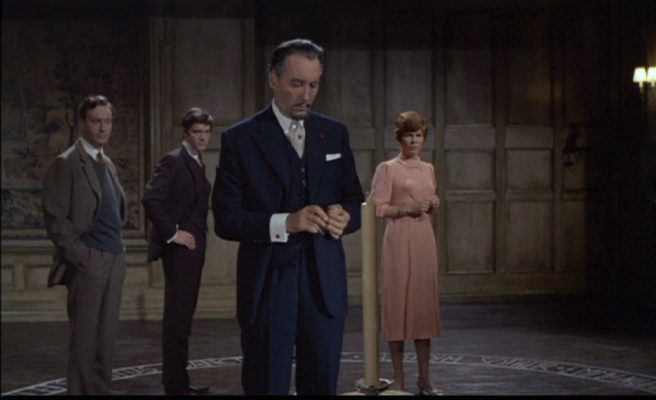 But even with excellent work by Lee, Gray, and Lawson, too much of THE DEVIL RIDES OUT is a mess to entirely give it a pass. Even Matheson and Lee are unable to overcome the heaps of exposition Richleau is required to spew out and the effects work is often poor—even by 1968 standards (some are even unfinished, with the Angel of Death’s reveal also showing a generous portion of a plain blue screen background). The whole self-serious enterprise crumbles under the weight of its pretensions, landing the (not nearly bloody enough) mess as a missed opportunity.

The Blu-ray sports a new 2K scan of a 20th Century Fox interpositive that has its American title of THE DEVIL’S BRIDE (apparently because a Fox executive thought THE DEVIL RIDES OUT sounded like a western). It looks great, highlighting some lovely and atmospheric cinematography by Arthur Grant. The downside of this clarity is how it highlights some of the less-than-completed effects work (in an older commentary also included on the disc, even Lee says that the film could benefit from being remade to take advantage of modern effects). 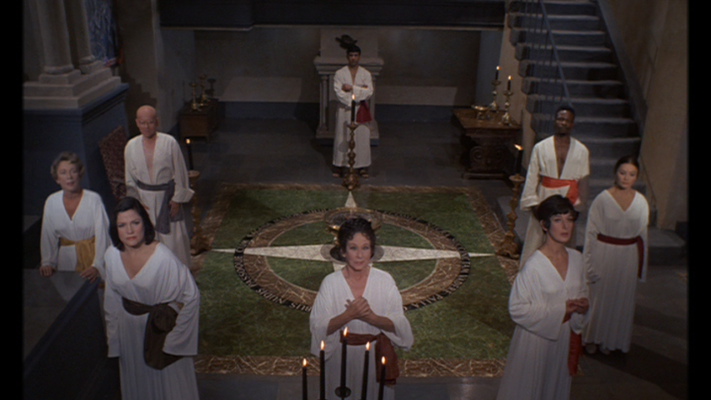 Aside from the new commentary with a positively gushing Haberman, Nasr, and Matheson (who does provide some nice insight into his father’s writing process), there are two new featurettes. One with film historian Kim Newman is more playful and irreverent and also happens to be the most balanced look at the film presented on the disc. The other with film historian Jonathan Rigby is more traditional, but falls more in line with the fawning approach of everyone else on the disc. Honestly, the best featurette is an older documentary featuring Rigby, Lawson, Matheson, and many others that is as close to comprehensive as these types of things get.

Despite my lukewarm response to the film, this is overall a nicely put together Blu-ray of a film that feels like the end of an era for Hammer Films (it came out in 1968, just before the British censors loosened up allowing for nudity and bloodier violence). That fact alone makes the film something of an important time capsule.

THE DEVIL RIDES OUT is now available on Blu-ray from Scream Factory.