Stephen King is the most influential voice in horror of the late 20th century. His books have been best sellers since his debut and have gone on to spawn numerous adaptations in film, TV, video games, and other media. King Of All Media looks at those adaptations, starting with his TV miniseries in chronological order. Each week Alejandra Gonzalez and Rob Dean will discuss a new miniseries project of King’s, with today’s installment being on 2014’s BIG DRIVER, directed by Mikael Salomon.

Rob Dean: There is never a “good” time for stories on sexual assault — that adjective would be poorly used in such an instance—but it is an especially difficult time to visit the subject in light of the national conversation surrounding allegations about Supreme Court nominee Brett Kavanaugh. I have heard from many women, and read many accounts by women, talking about how much this episode has triggered them and dredges up previous encounters, issues, fears, and the devastating realities of how survivors are treated. I also was not expecting BIG DRIVER to be about sexual assault at all, as I had never heard of it previously. Yet watching it, and revisiting the awful topics that need to be discussed more openly and honestly in order for greater progress, I was surprised to discover that it was one of the better TV works we’ve seen in our run here at King Of All Media.

Based on the 2010 novella of the same name by Stephen King —appearing in his collection Full Dark, No Stars — BIG DRIVER was written for screen by Richard Christian Matheson, directed by Mikael Salomon (SALEM’S LOT, NIGHTMARES & DREAMSCAPES), and aired October 18, 2014 on the Lifetime Network. In it, Connecticut author Tess Thorne (Maria Bello) is a cozy mystery writer known for her knitting circle series of books and has been invited to speak at an event at a library in upstate Massachusetts. The organizer of the event, Ramona (Ann Dowd), tells Tess about a shortcut back home that eschews the highways and is much faster. After getting a flat right next to an abandoned gas station, a man comes to help her — but quickly turns aggressive and proceeds to sexually assault her. After being left for dead, Tess manages to make it home and begins to figure out her next moves. Going public or to the authorities is a minefield professionally and personally, but she also desires some form of justice for the heinous act done to her. With the help of Doreen (Olympia Dukakis), the imaginary protagonist from her books, Tess begins to put the clues together and figure out how to repay those responsible for what happened.

BIG DRIVER is a hard watch in any setting — all variations of the rape revenge story is tough to experience — but it was certainly not made any better by recent events. However, with the large caveat that it is very difficult viewing and certainly triggering, I found it to be one of the best TV movies/miniseries we have seen since we began this project. It’s certainly not perfect, but it is worlds apart from most of the mediocre to poor adaptations we’ve covered. First and foremost—Bello (A HISTORY OF VIOLENCE, LIGHTS OUT), Ann Dowd (HEREDITARY), and Dukakis (STEEL MAGNOLIAS, MOONSTRUCK) all turn in very strong performances. Bello runs a full gamut of emotions, from nervous, to confident, to injured, to angry, to wounded, but all underneath a believable umbrella of vulnerability and a sense of being natural. Tess is a brilliant and strong character, an excellent detective figure that also feels the reverberations of her assault for a long time after.

Ale, what did you think of BIG DRIVER? You’ve seen plenty of rape-revenge films, how do you think this one handles the subject matter? What stood out to you, good or bad?

Alejandra Gonzalez:  Rob, I loved BIG DRIVER. I am so pleased that we got to end on a strong note, despite how hard this miniseries was to watch for me. I agree with you that there is never a “good” time for stories like this, but I think BIG DRIVER handles the extremely serious subject matter well, and in a way that doesn’t feel exploitative. The duration is rather short at just 87 minutes, but I still feel like we get enough time with every single character, even a sentient GPS, so that we have enough time to feel invested in the fates of each. I found myself caring about Tess from the minute we met her, and thought Maria Bello oozed charisma in the part. Ann Dowd was just as creepy as she was in HEREDITARY and for some reason does a great job as somebody you’re supposed to trust who turns out to be terrible… I’m suspicious.

Anyway, what makes BIG DRIVER good to me is the perfect amount of intensity that it provides. I am personally not the world’s biggest fan of the rape-revenge sub-genre, though I understand and completely agree that they can be a means of catharsis for other victims. I find that it has a lot to do with myself just being unable to take the intensity that ensues after something so horrible has already happened on screen. In BIG DRIVER, Tess is completely broken after what happens to her. We see her become paranoid, afraid, and she spends time contemplating her next move. Personally, it was more easy for me to identify with Tess in the aftermath of what happened to her than with most other women in other films in the sub-genre. I understand the fantastical nature of events that happen in films like REVENGE, which is where many people find their catharsis. But, the way we see Tess struggle felt real and I had an easier time finding solace in that. Even when Tess decides to take action and seek her vengeance, BIG DRIVER maintains an intensity that is palatable for me despite the gravity of the subject matter.

Where would you say BIG DRIVER ranks among your revenge favorites? 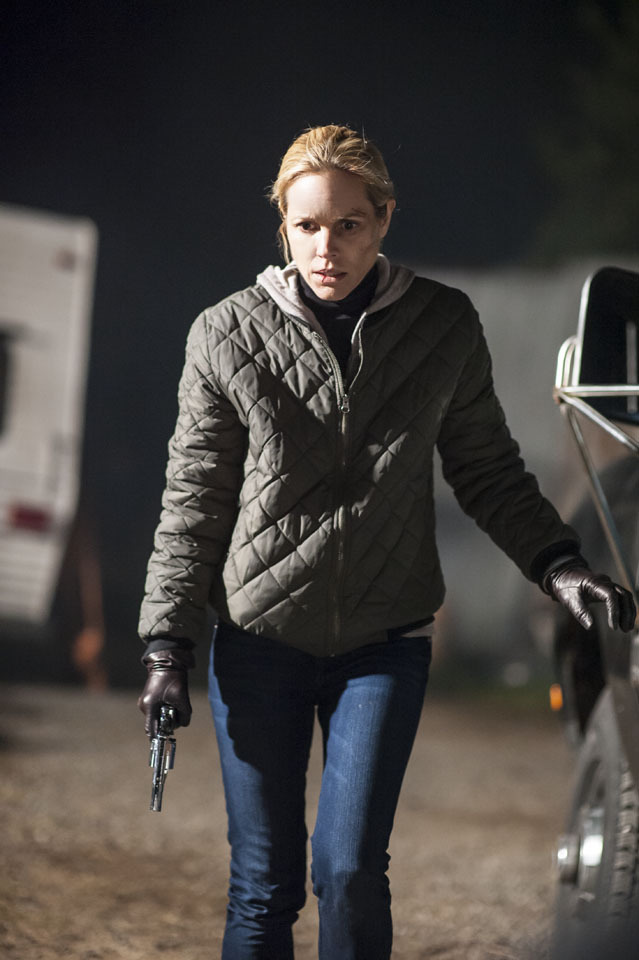 Rob Dean: Revenge — broadly speaking — is one of my favorite subject matters in film. Maybe because I tend to not be the vindictive type, I like seeing some form of justice served, while also acknowledging that it tends to still be scarring for the wronged protagonist (“dig two graves,” etc.). The rape revenge is not as much an enjoyable film — it’s a very hard line to balance upon between addressing something awful and exploiting it. But BIG DRIVER is successful to me, along with other titles like the aforementioned REVENGE or MS. 45, in that it doesn’t feel exploitative and the horrific action doesn’t feel titillating or like a trivial plot device. Tess is a fully realized character who isn’t defined by the terrible actions against her, but still needs to confront them using all of her talents and abilities.

This movie, as opposed to the vast majority of what we’ve watched, was actually shot like a film. The camera moves around and there are is honest to god real framing used. Salomon turned in something that acts cinematically, even if it was just meant for the Lifetime network. It’s not super inventive in plot or imagery, but there is a lot to be said for something competently made that is thoroughly engaging.

The only slight quibble I have — and have seen mentioned by other reviewers — is a question of tone. The discussions (in Tess’ head) between Tess and Doreen tend towards the humorous, usually through the juxtaposition of quaint Grandma Doreen offering folksy advice for doling out eternal justice. While I can see why folks might take issue with that, I thought it worked well. Doreen is a facet of Tess, and part of the character is being multi-faceted with competing emotions and depths. I find it films much more believable when there is a bit of a mix in tones and emotions — life tends to not be monochromatic in emotion but instead offering pockets of the comic within tragic circumstances, and vice versa. I also thought it was a clever foil to have Doreen guiding Tess through her journey of vengeance (I thought for certain that the GPS’ history was going to be used as evidence against Tess in the end or something). So while it worked for me, I can see where some people wouldn’t care for it.

What did you think of the handling of tones — between Tess, Doreen, and Tom the GPS? Even the confrontation with Ramona has some oddly comic bits in it (Ramona calling Tess’ writing “pedestrian”). Was any of that jarring to you? Also, what did you think of Joan Jett’s character and her epilogue call to Tess?

Alejandra Gonzalez: I actually really liked the way BIG DRIVER handled tone, and I like the way that we see different facets of Tess through these characters she makes up (Tom, Doreen). I think that the humorous banter between Tess and characters who are different parts of herself is indicative of what kind of person she is, and also proves that she hasn’t lost who she is because of what happened to her. We get a glimpse into Tess’ humor even from the get go, so to see that it is preserved after her assault was actually extremely comforting to me. Besides that, it made the content slightly less of a gut-punch, considering everything that we’ve seen in recent news. I guess I didn’t mind it because I didn’t think it made light of her assault and that it was handled tastefully. I’m glad you mentioned that confrontation scene between Ramona because it speaks to what I said earlier about portraying Tess as still really afraid and acting despite it. Bello is so great that you can tell she’s not very sure of herself during the confrontation, but is still brave and strong. 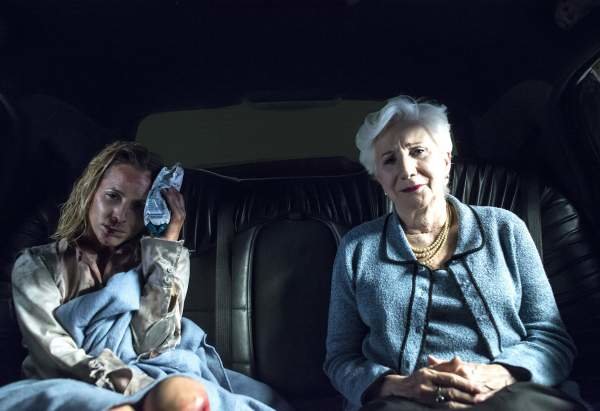 As for Joan Jett — anyone who knows me knows that I love her very much. I think she was great in this, and I at first thought her character didn’t really need to be in the miniseries. After a while, I really like that she was because of the solidarity it creates. Had the only other victims BIG DRIVER showed us been the decaying girls in the pipe, it would have been less powerful than what we got, which was a story of multiple survivals. Her character reinforces that survival is possible and the empowerment that can come with solidarity. I loved the epilogue call as well, and it sent shivers through my body.

I can hardly believe we have officially been through every King adapted miniseries we set out to visit. It has been…  a journey, to say the least. I am glad we got to end on a very solid page, but I don’t want this to be the end! Because I have such a hard time with goodbyes, next time we’ll be discussing our highest and lowest points with these adaptations and what can be expected in the future!