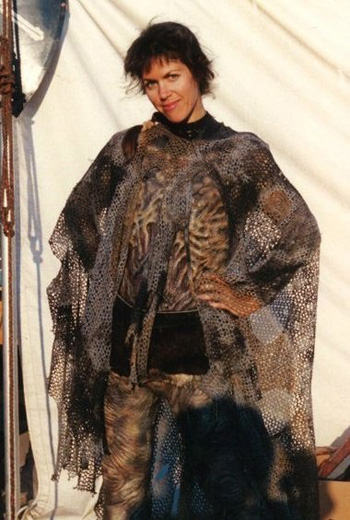 When she’s not scribbling nightmares on paper, Dana is also an actress, having appeared in such classics as PRINCESS WARRIOR and fanboy favorite ARMY OF DARKNESS (starring everyone’s favorite Chin). 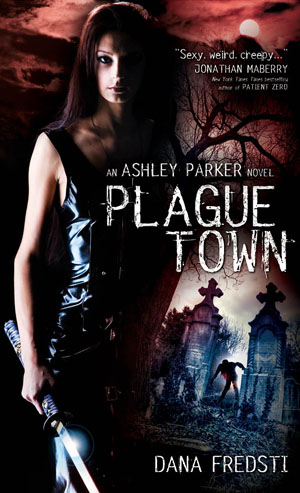 DG: When did you know you wanted to be a writer? What were you influenced and/or inspired by?

DF: I started writing as soon as I was able to spell enough one syllable words to write a three sentence story about the end of the sun. I pretty much wrote to entertain myself from that point on, but took a deviation on my career path with forays into music, acting and the ever-exciting world of temping. I got back into writing with a serious eye towards publication in my thirties when I realized I didn’t have the drive to pursue acting seriously and that I’d rather work in my pajamas and enjoy food than diet down to a size 2 and get a boob job. I’ve been working on the writing career ever since. Although I still can’t wear pajamas all the time, more’s the pity…

When I was younger I was really influenced by authors like C.S. Lewis, Lloyd Alexander, Bram Stoker (I read Dracula at a pretty early age), and Henry Winterfield. I also loved Ruthven Todd’s Space Cat series. As I got older, Elizabeth Peters, Stephen King, Barbara Hambly, Charles de Lint all spring to mind. I’m pretty much inspired by any books that let me get lost in another world/time/place because they fire up my own creativity and make me want to have that same effect on other readers. I was also influenced by horror and science fiction films and shows, including the original Dark Shadows (I used to think it was SO scary back in the day), STAR WARS, anything with Christopher Lee, and, of course, the original DAWN OF THE DEAD. That movie pretty much kick-started my love of zombies. In a strictly platonic way, of course! 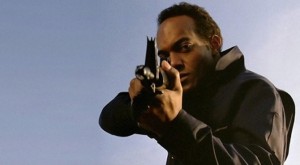 Though there are exceptions-Linda Hamilton in TERMINATOR 2 and Milla Jovovich in RESIDENT EVIL coming immediately to mind-what are your thoughts on the relatively rare kick-ass female heroine? Is it hard to push tough female heroes to a jaded (perhaps even chauvinistic) male-dominated genre audience?

Well, I know that I get sick of women being relegated to the roles of supportive spouse/girlfriend, nurturing mother, bitchy ex or someone for the hero to rescue (yes, I am thinking of INDEPENDENCE DAY, THE DAY AFTER TOMORROW, and 2012 about now). And it’s silly because there are tons of women who would love to see more strong female protagonists in books and films. The fact that Ripley is such a popular character in the ALIEN movies, along with the growing number of urban fantasies with kick-ass female characters, should give producers and publishers a hint, doncha think? Then again, the fact that there are more books featuring heroines instead of heroes is a good sign that the male-dominated genre audience is either learning to appreciate strong women or that women are making up more and more of that audience these days. As far as personal experience, I didn’t have any difficulty selling Ashley as a character to my Titan editor, Steve Saffel. Obviously a very modern male! And many of the positive reviews Plague Town has received have been written by men. So…there’s hope! 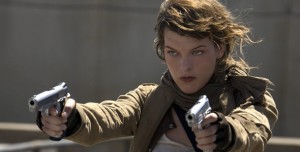 Being a strong woman and a swordfighter yourself, how much Dana Fredsti did you instill in Ashley Parker?

I think there’s a little of me in all of my main characters, but I guess I really do relate to Ashley pretty strongly. Like Ashley, I was fairly clueless in terms of what I wanted to do with my life when I was in my late twenties. I was definitely a dabbler as opposed to someone with a strong sense of career direction. When we meet her, she’s a liberal arts major (I never made it past a semester of college because I got in a rock band and decided I didn’t have time for any more school) with no real idea of what she wants to do. Underneath the indecision, though, she’s still a strong person. I didn’t realize the parallels until I had to answer this question a few times. And yes, well, the sword-fighting is definitely a Dana thing, but part of the reason I gave her those skills is because it’s easier to write fights realistically if you’ve actually used the weapon(s) in question.

Without delving into spoilers, I found the zombie mythos and the logistics of how the affliction is spread in Plague Town particularly fascinating. How did you come about introducing a fresh element into a genre some might argue has grown a bit stale?

Well, first of all, I’m really glad you think it’s a fresh element! You know just what to say to make an author happy. The original idea for the logistics of how the zombie outbreak spreads came from a conversation with Brian Thomas (we co-wrote some screenplays together) back when I’d just signed the contract for Ashley Drake: Zombie Hunter. He thought it would be funny to use H1N1 in some way and call the bug “Hiney.” I didn’t do that, obviously, but the ensuing conversation helped me develop the “how am I gonna spread this zombie outbreak?” idea that I used in Plague Town. 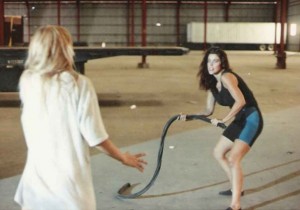 How radically was Plague Town changed from the original story Ashley Drake: Zombie Hunter? Was it always intended to be a trilogy?

Answer to the second half of the question first: yes, it was always intended to be a trilogy. I had to map out a vague outline of all three books before I started writing the first one. I say “vague” because I suck at outlining.

As far as changes, Ashley is ten years older than she was in AD:ZH (acronyms are our friends!), there is definitely a lot more zombie action/gore, and there were no third person “interludes” in the original at all. The pacing of the story is also a lot tighter and faster, thanks to the deadly red pen of my wonderful Titan editor, Steve Saffel. I also toned down the more overtly romance-genre tropes (you will not read about Gabriel’s gorgeous blue eyes ad nauseum), although there is still a relationship between Gabriel and Ashley. Plague Town is NOT a “kissing book.”

Being a noted cinephile, what was the first flick that changed your life?

Gotta say THE THREE MUSKETEERS, directed by Richard Lester. That instilled a deep desire to learn how to sword fight, plus inspired notebooks full of musketeer stories. After that, DAWN OF THE DEAD. 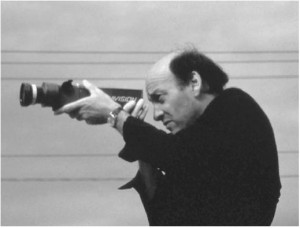 Several of our readers are big Bruce Campbell fans (some to a rather creepy degree). Tell us a little about your experiences on ARMY OF DARKNESS and collaborating with the likes of Mr. Campbell and Sam Raimi.

Hee hee…Okay, right off the bat, Bruce Campbell was very Ash-like during the filming of Army of Darkness. What you see is what you get, or at least it was on set. I didn’t interact with him (although one of my fights with my favorite fighting partner on set did get a nod of approval, which was very cool), but definitely saw a lot of his scenes being filmed. The words “This is my BOOM stick!” haunt me to this day… take after take after take, and I was stuck in the background as one of the castle extras that day. Sam Raimi was a total gentleman, always made a point of thanking everyone at the end of the filming day. His brother Ted was a sweetheart, and one of my favorite things about the film is a bit where Ted plays three different characters in the same scene. 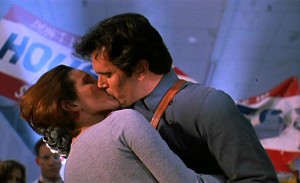 First part of filming I was one of the onset armourer’s assistants (the onset armourer was Brian Thomas, who I mention above). That was fun in its own way and I did a lot of hands-on work distressing the plastic armour, repairing straps and buckles, and helping the extras armour up. When it came time to film the Deadite scenes, I switched over to sword-fighting Deadite and one of the fight captains working with Dan Speaker and Jan Bryant, who were the choreographers for the film. Many long days and nights, but it was a really cool experience all the way around and the fact that ARMY OF DARKNESS has become such a cult film just adds to it.

I just watched some clips of PRINCESS WARRIOR on YouTube and it looks AWESOME. Okay, that’s not a question. Tell us a little about your work in film, working with such legends as Ken Foree (George Romero’s DAWN OF THE DEAD) and Joseph John Barmettler (Anna Nicole Smith’s SKYSCRAPER).

Wow. No one has ever applied the word “awesome” in reference to PRINCESS WARRIOR before. Awesomely BAD, yes. It’s really an awful film, but I had so much fun working on it. I mean, how many people get to play an over-the-top villain (I channeled Tim Curry a la ROCKY HORROR and William Shatner a la James T. Kirk) whose torture implement of choice is a white hot spoon? Schweet…. 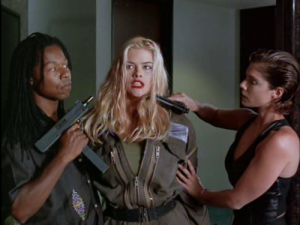 As far as working with Ken Foree, that was absolutely the best film experience I’ve ever had. I mean, getting to act with Ken Foree, Josef Pilato and Brinke Stevens all in the same project? This was PALE DREAMER, a script Brian and I wrote. He and our friend Jeff Varga co-directed the trailer . It was sci-fi/horror/humor rolled up in one really fun script (if I do say so myself) and we got these wonderful actors to commit to the project and film the trailer because they liked the script and the characters. So… total validation as a writer and then the above-mentioned fun and thrill of working with these three at the same time. I was more geeked out about meeting Ken than I would have been about meeting Tom Cruise or Brad Pitt. I’d already worked with Josef on a couple of projects so I’d already gotten over the geek-out factor with him, and had gotten to know Brinke as a friend and was just delighted to be able to work with her. She and Josef were the bad guys and Ken and I were the protagonists. Our characters, Jake and Jeanette, had a very sarcastic and slightly antagonistic relationship due to being stuck together for months on end, and Ken and I pretty much started sparring verbally from day one. Sigh. So much fun. 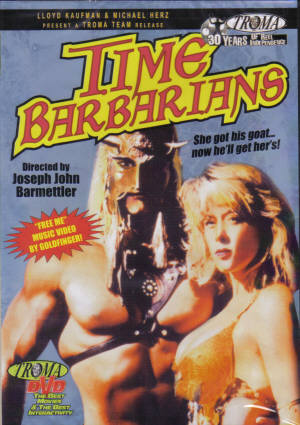 As for Joseph B., he directed TIME BARBARIANS. I had three roles on that film: production assistant; Gatalite Warrior (I get punched by the hero, who then laughs ’cause he is just that macho); and (my favorite) the voice of one of the barbarian babes in the topless bathing scene . That’s right, the voice of the busty blond (I think her name was Victoria and she did some adult films) would be me. Joseph was very nice and very serious about his work, hence the pseudo Shakespearean dialogue in ‘ye old Barbarian times’ scenes (that dialogue being the reason I am the voice of the boobacious blond).

What’s next on the docket? PLUG AWAY!

Well, as soon as I finish up answer interview questions and writing posts to promote Plague Town, it’s back to work on Plague Nation and then Plague World, the next two Ashley Parker books. I’m also working on another zombie related project with Brian Thomas and Mark Worman of Division Productions. But I can’t go into detail on that quite yet. After that? We shall see! 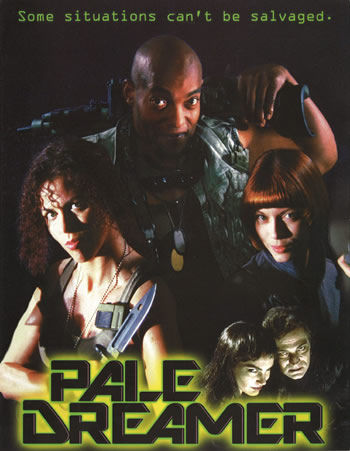