with a smile on her face. 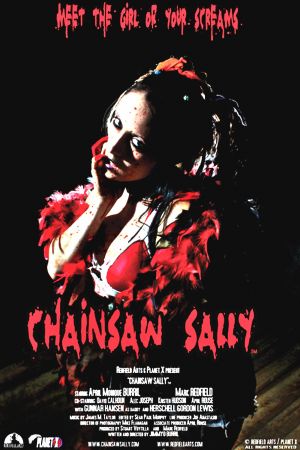 Chainsaw Sally took over the web when her first series hit, and the closer Sally star April Monique Burril and her husband JimmyO Burril (DG Featured Filmmaker) get to completing season 2, the closer they get to making Chainsaw Sally the first lady of horror. April and JimmyO created Sally by grabbing a mixing bowl of horror and humor and tossing in some Elvira, Freddy, Leatherface, Bugs Bunny, and Tank Girl. You bake that in an oven and you get a 5’4 hotter than fuck smart-ass killer who you want to keep as far away from a gas powered tool as possible. Unless of course you’re the viewer, in which case we can’t wait for Sally to start doing her thing.

DG had the chance to talk to April about Sally, some of her favorite kills, and the horror genre in general. So let’s gas it up, and let’er rip.

DAILYGRINDHOUSE: Thanks for hanging out with us for a little bit. We like to press rewind with all our guests and jump back to the first film you remember watching that changed your life. Do you remember what film that was and what that experience was like?

APRIL MONIQUE BURRIL: Hm…. well, I caught a midday showing of THE BLOB (original version) when I was only six. It scared me so badly that I ended up getting in trouble for refusing to stay in my room come bedtime. The scariest part wasn’t when the Blob was huge, but that scene where it’s eating the old man’s hand. It was only the size of a bowling ball at that point, but he made it look sooooo painful! Great stuff. I started gaining a taste for the dark side at that point.

Also, life-changing for me was… don’t laugh… NEVERENDING STORY. I saw it the summer before my 6th grade year. I think the concept of every book I’ve ever read and every “pretend game” my friends and I came up with, (not to mention every monster I imagined in my closets or under my bed) actually existed on this other plane of ‘reality’… Neat concept. That was also the same week I was introduced to Dungeons & Dragons. So, all in all a pretty wonderful earth-shaking time for me.

DG: Yeah THE BLOB has come up a few times with some of our guests but NEVERENDING STORY is a first. We are about the same age though and that film was huge when we were kids so I can dig the impact that had. Do you remember what theaters you saw those in?

AMB: THE BLOB I saw on television. So… in my house in Delta, Pennsylvania. NEVERENDING STORY I saw at a theatre while visiting relatives in Maine.

DG: What was the last movie that freaked you out?

DG: What is it about the horror genre that pulls you in?

AMB: Same reason I love roller coasters I guess… scary fun! Always was a sucker for the dark side.

DG: Did you hit the flicks a lot as a kid?

AMB: Sure. Whenever I could get my parents to take me. I do remember one fun weekend when a friend was visiting from California. NIGHTMARE ON ELM STREET 4 was in the theatres… and not much else worth seeing. We went to the theatre to see it 4 times in that one weekend. Very fun!

DG: So VHS has a lot of fans out there and they always want to know if you remember the name of your video store?

AMB: Shortstop Video. They also sold liquor and seafood. I remember browsing videos surrounded by the smell of fish and Old Bay.

DG: So you could grab TEXAS CHAINSAW, some Trout and Black Velvet? That is both awesome and slightly nauseating. So you have lived in the world of independent horror for a long time. Can you talk a little but about how it’s changed?

AMB: Well, as digital technology became available, there was this HUGE opening for micro-mini-budget filmmakers. I saw this as both good and bad – mostly good. It meant just about anyone who could get a hold of a camera wanted to make a film. So, there was a lot of dreck out there, but then again, alot of very talented artists who’d never had access to the funds needed for filmstock now had a medium available to them. As time has gone on, most of the beginners either realized it wasn’t for them and dropped out, or the good ones have now had time to develop their skills and we’re starting to see some very clever independent work show up.

AMB: Never. Chainsaw Sally JOINS with Leatherface, yes yes and yes. Since the earliest days of Chainsaw Sally’s creation as a web-based horror hostess, Leatherface has been her number-one dreamboat crush. She’d never fight him. 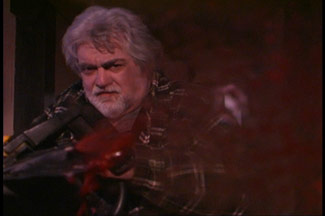 DG: You have worked a lot with Debbie Rochon who has some done a crazy amount of films. What is she like to work with and can you get us a date with her?

AMB: Hahaha… don’t know about that date… but yes, I’ve done a good bit of work with the fabulous Ms. Rochon. Our first film together was The Good Sisters and that was absolutely one of the best acting experiences I’ve had. I learned so much working with Deb and had a great time. Since then, we’ve paired up in a short film entitled “The Flush”. 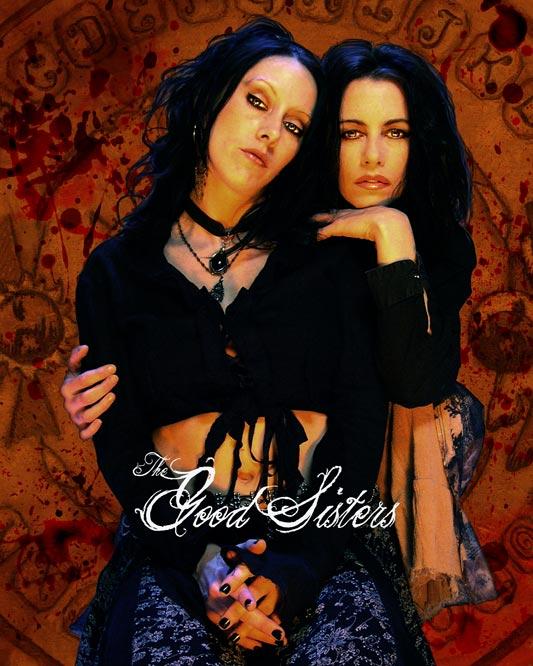 AMB: Only because the concept of a catfight with that hottie is just…. delicious. But… I’d do it out of love!

DG: What has been your favorite kill in the Chainsaw Sally series?

AMB: Hmmmm…… I REALLY enjoyed my ridiculous cat-fight with Nicola Fiore in CSSS season 1. So far this season, the best death is by far the “chainsaw enema” with Rob Dimension. Yes. I said it. Chainsaw Enema.

DG: In addition to the next season of Chainsaw Sally, what else are you working on?

AMB: Nothing, movie-wise, at the moment. I am in the middle of a couple of illustration jobs. One of my many other hats is an illustrator of fiction books – mostly children’s. This particular one, however, may be of interest to horror fans. It’s a lovely creepy little short story by Mike Gutridge entitled “Devious Dead Girl”, about a spooky evil child who comes to life for one night and has until dawn to find herself a body to inhabit. She leaves a bit of a mess along the way. I’m having a pretty great time with the art.

Soon, I’ll be working on a film short with some folks in LA that will be… sooooo disturbing… but I’m not at liberty to discuss further details until the project’s announcement at this year’s AFM (American Film Market). Other than that, I’m just waiting for completion of The Chainsaw Sally Show season 2… then I believe we’ll be turning our sights to a non-Sally related feature. Jimmy has a few scripts ready. All promise lots of crazy bloody fun.

DG: How can the readers help Chainsaw Sally?

AMB: Lots of ways… if they have extra funds to spare, The Chainsaw Sally Show is running a campaign on Indie Go-Go to raise money to fund CSSS season 2. We have lots of cool dvds, signed photos, and other merch for sale on our website. But… MOSTLY keep that word of mouth going!! Every fan, make it your goal to bring in 2 more fans and ask them to do the same! We’ll be the Amway of the indie horror world!! (now if THAT isn’t enough to leave ya shakin’ in yer boots….) Spread the word, folks!!!

After talking to both April and JimmyO this week, I can tell you they are one cool couple. Here is the link to the Indie GoGo site that April mentioned. Support independent horror and show CHAINSAW SALLY some love: